The TACs project is interested in suggesting those reforms to the tax system that might achieve three goals. One is to assist any government in fulfilling its fiscal objectives in supporting the economy in the post-coronavirus environment. The second is to assist that same government in fulfilling its inflation goals. This is by ensuring that sufficient sources of tax revenue are available to ensure that demand in the economy can be managed in a way that ensures neither significant inflation or any deflation occurs. Third, the goal is to produce a more equitable society, This is a response to the call in the Financial Times on 3 April this year when it said:

Radical reforms – reversing the prevailing policy direction of the last four decades – will need to be put on the table. Governments will have to accept a more active role in the economy. They must see public services as investments rather than liabilities, and look for ways to make labour markets less insecure. Redistribution will again be on the agenda; the privileges of the elderly and wealthy in question.

The TACs project accepts both the logic in this statement and the challenge that it represents: new thinking is required for a post-coronavirus consensus and action is required to plan for it. TACs agrees with the Finacial Times that the consensus in question must be more equitable. The reason for that as been explained.

Based on this logic the TACs project has already shown that there is considerable capacity to tax wealth to a greater extent than has been the case to date. It has, however, been argued that a wealth tax is not the solution to this problem, at least for the time being. Instead, shorter-term solutions are being sought. The way that these have been identified is via a tax spillover analysis.

This has resulted in the identification of three ways to deliver reforms to the taxation of wealth in the short term. These are, firstly, to equalise tax rates on equivalent sources of income or allowances. Second, it is by reconsidering those things that should be taxed that are not but might be if the goal of greater equality is to be achieved, and vice versa. In other words, those parts of available tax bases subject to exemptions and reliefs need to be reviewed. Third, it is about creating a more progressive tax system by changing tax rates without challenging, as far as possible, the first objective.

The first reforms that might be considered all fall within the first group. The other issues will then be addressed in turn. Each reform will be subject to a separate post.

Equalising the tax rate on income and capital gains

Capital gains tax was introduced in the UK in 1965. As was made clear by James Callaghan, the Chancellor of the Exchequer at the time, the aim was to ensure that income did not leak from the income tax system and so fall out of tax altogether. The tax was as a consequence always as much an anti-avoidance measure as it has been a revenue-raising tax.

This revenue-raising data does, however, miss the point of the tax. Since it was created to prevent the income tax system being undermined a low revenue is to some extent the clearest indication that it is working as a deterrent. That revenues are now rising steadily, as is the case, can be interpreted in the exact opposite way, which is that this tax is not achieving its goals.

The current and historic rates of this tax, as noted by Ross Martin, Accountants are: 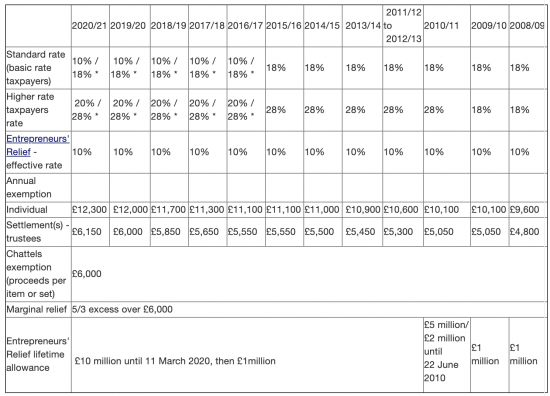 This in comparison to income tax, where the same source notes rates to have been:

But what has also to be taken into account is the fact that capital gains tax has a separate and additional annual tax-free allowance as noted in the first table. For income tax that allowance is as follows:

It will be noted that in effect the capital gains tax annual allowance effectively doubles the available tax-free sum that a person might enjoy. In the last year for which data is available 260,000 people paid capital gains tax, meaning that they must have had gains above this sum.

If a government is to address the apparent under taxation of wealth then it is apparent that the rates of tax due on income and capital gains must be equalised.

In addition, the annual allowance for capital gains must be substantially reduced.

There are a number of reasons for suggesting this. First of all, it should be noted that unless the rates of capital gains tax and income tax are equalised then capital gains tax fails to stop tax avoidance, which is its purpose. Indeed, it does instead encourage it.

Secondly, by offering a lower rate of tax on a return from wealth the inequality on overall tax contribution made by those with wealth and higher incomes noted by the Tax After Coronavirus (TACs) project will continue.

Third, this disparity in rates will continue to encourage perverse behaviour in the economy, including the encouragement of the recognition of capital gains rather than dividends in the returns from companies.

Fourth, the diversion of considerable effort into tax planning, which is wholly unproductive for the economy as a whole will be ended.

Fifth, the short term churning of gains to minimise tax might end, to the advantage of investment management of portfolios where long term views should be taken.

And sixth, and most importantly of all, people will be seen to be equal within the economy. When, as a matter of fact, a pound received is indifferent in worth as to its source it should be taxed at the same rate taking into consideration the situation of the recipient whatever that source might be, and unless it is the tax system is obviously discriminatory to all who partake in it.

The recommendation is easy to implement: capital gains would simply be treated as the top part of income for assessment purposes. The declaration process for capital gains need not change at all.

It is accepted that a small annual allowance may be appropriate to save some HM Revenue & Customs administration cost: a sum of no more than £2,000 should be allowed for this purpose.

The amount of revenue potential in this proposal is hard to estimate. In theory it would at least double the annual yield from this tax because of the increase in rates, and may do rather more than that taking the reduced allowance into account. However, this is unlikely since the equalisation of rates would result in significant behavioural change, and much less recategorisation of income as gains. Since this was, and is, however the primary purpose of the tax that would be welcome.