Tax After Coronavirus (TACs) : The need for an investment income surcharge

There is a major problem within the UK tax system as a result of the fundamentally different levels of tax paid on income from work and income from investments.

The difference results from the fact that the UK has throughout the whole post-war era had a social security system that is supposedly funded by national insurance contributions (NIC). The reality is that NIC does not fund that social security system now: NIC is now simply a tax, However, the suggestion that this is both a form of insurance and that contributions from those in employment are required as a result has persisted despite that fact. As a consequence an anomaly has been created within the UK tax system.

A detailed numerical explanation of the consequences arising from this disparity is hard to provide, precisely because the NIC system is complex, and rates vary heavily across income scales. However, for employees broadly speaking NIC is paid at 12% on the equivalent of earnings between £9,500 and £50,000 per annum from each employment, and at 2% on earnings above that sum whilst employers pay NIC at 13.8% on the earnings of their employees over the equivalent of £8,788 per annum. Investment income suffers no such charges.

As example of the resulting disparity, assuming £40,000 is available to pay a recipient to whom it is owed, then comparing the tax due on that sum if paid as a salary or as investment income produces the following comparison: 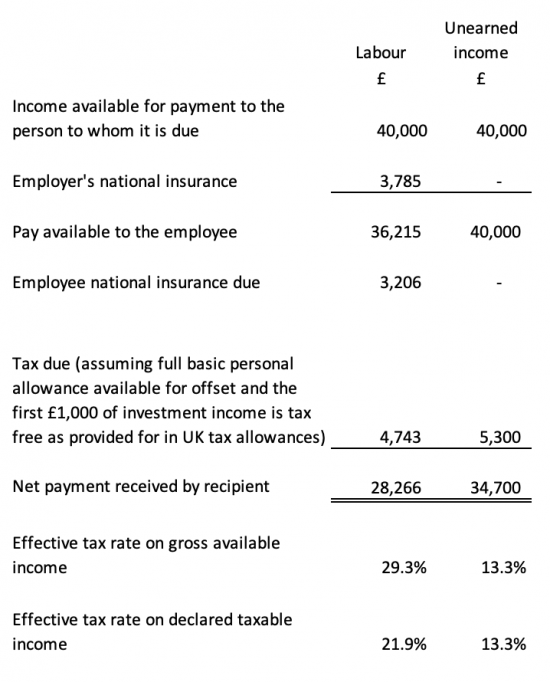 The example is indicative. It is also the case that if the investment income is from dividends a different tax regime applies, and the tax rates can be slightly higher, but are still less than those on labour.  The point, however, is very clear, and is that earnings from employment are substantially more heavily taxed than are those from investment income.

For a very long time the UK tax system addressed this issue. Until 1973 the solution was called surtax: an additional tax rate on the wealthiest. Thereafter as the Institute for Fiscal Studies noted in 2002 (and note, this quotation has been edited to highlight the relevant points):

In 1973, the system was overhauled, integrating the surtax on high incomes, which dated back to 1911, into the main income tax and simplifying the operation of the rate structure. During the 1973 reform, the very top rate of income tax on earnings was left at 75 per cent. In 1974, the top rate on earnings was actually increased, to 83 per cent.

Throughout these years, the highest feasible rate on investment income was higher still.  These very high tax rates became the focus for discontent over the possible disincentive effects of taxation, even though they affected very few individuals and the theoretical impact on labour supply was ambiguous.

As they noted of the investment income surcharge:

The investment income surcharge [was] an additional income tax charge on unearned income. As this had a maximum rate of 15 per cent, in the second half of the 1970s it combined with the 83 per cent top main income tax rate to give a top feasible marginal rate of 98 per cent on unearned income. Very few individuals were actually charged at this marginal rate. The investment income surcharge was abolished in 1984.

Since 1984 the bias in favour of unearned has existed.

The way in which HMRC supplies data on income tax paid on investment income makes it very difficult to estimate how much additional tax would be due as a result of this change in rate, not least because some figures are stated net of allowances. However, for 2016-17, which is the most recent year for which much of the data is available, investment income was as follows: 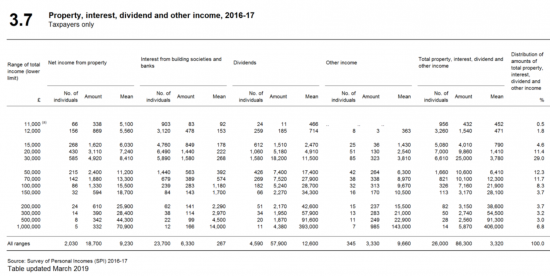 Total investment income for those earning over £50,000 was £45 billion. If an investment income surcharge for all those below the age of 60 (when retirement becomes more commonplace) of 15% on all investment income exceeding £2,000 a year was introduced a significant step towards addressing this imbalance would have been created. The yield might exceed £4 billion, but some variation is possible and would require better data before any estimate could be refined.