Tax After Coronavirus (TACs) : The tax spillover methodology that underpins the work

The Tax After Coronavirus (TACs) project intends to suggest those reforms to the UK tax system that might be necessary to meet the demands of our economy over the coming years whilst simultaneously delivering tax justice. This demands that criteria for appraising the existing tax system be used as the basis for suggesting reform.

Over the last couple of years I have, with my colleague Andrew Baker of the University of Sheffield,  put a lot of time and effort into developing a new mechanism to identify the risks that are inherent in any tax system. We call the resulting methodology tax spillover analysis. It was created as part of the EU funded Horizon 2020 Combating Financial Fraud and Empowering Regulators (COFFERS) project.

Tax spillovers are the deliberate or inadvertent risks created both within and between tax systems because one part of that system undermines the objectives of another part of that same system or of the tax system of another country.

Examples of tax spillovers are easy to find. For example, tax haven secrecy when coupled with low or no taxes in such places clearly encourages the relocation of money and assets (at least for tax reporting purposes) from the tax jurisdiction to which they really belong to the tax haven. That is, of course, why so much effort has been put  into this issue in recent years by the OECD, and others.

There are, however, many more risks that exist. As the methodology makes clear, these can either be domestic, which means that a country’s tax system undermines itself; or they can be international in nature and be created by the tax jurisdiction, which is what the tax haven in the previous example does; or they can be imposed from another jurisdiction, as happens to the location that suffers tax haven abuse in that same example.   All three risks are rated separately in tax spillover analysis.

The ranking is done on a risk scale from 1 to 5, where 1 mean that the systems are reinforcing of each other, 5 means that they deeply undermine each other, and 3 is broadly neutral.

In pilot studies risks were appraised across eight taxes and features of tax administration, because long observation of the tax systems of many countries suggests that the latter are at least as important to the creation of tax spillover risks as poor tax design is by itself. Those categories are: 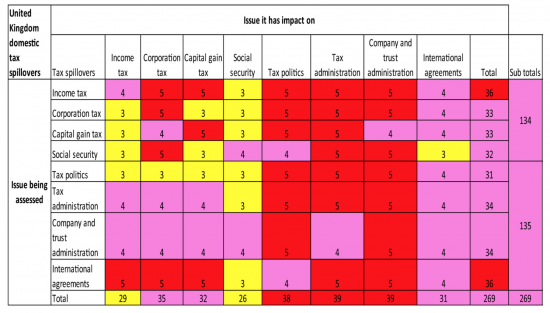 More information on how this chart was developed can be found here, here and here.

The chart has been colour coded to indicate risk. Red is maximum risk. Green represents a reinforcing system.  The absence of green and the prevalence of red is apparent. The UK tax system deeply undermines itself as a result of having:

In the current economic climate this is a matter of considerable significance. It is very likely that the coronavirus crisis will leave the UK government with a considerable financial deficit and an increase in what is described as government debt. There have already been calls for new austerity measures to tackle this issue once the crisis is over. This work shows that this is not the only option available to the government. Simply by tackling the ‘low hanging fruit’ in the spillover risk assessment the government could raise considerable additional revenues simply by closing the opportunities for abuse within the existing tax system, ensuring as a result that all those who do owe tax do actually pay it. In addition, tax justice could be substantially enhanced and inequality could be tackled.

It is the logic of this methodology that the Tax After Coronavirus (TACs) will be using to underpin its work. Further posts to explain this methodology in more detail will be published soon.