As I have already explained this morning, there is no Covid debt crisis. The UK national debt hardly increased in 2020/21. And the cost of servicing the debt from Covid could be virtually nothing, if the government so chose. There is, in other words, no excuse for the government to impose 'Cuts for Covid' as if somehow the crisis needs paying for, when that is not the case.

This, though, is not to say that there isn't an economic problem resulting from Covid. There most definitely is a real problem arising from the crisis. That is the result of the very high level of government spending during 2020/21.

That spending is explained by this chart of the so-called 'sectoral balances within the economy. This version comes from the March 2021 budget forecasts from the Office for Budget Responsibility: 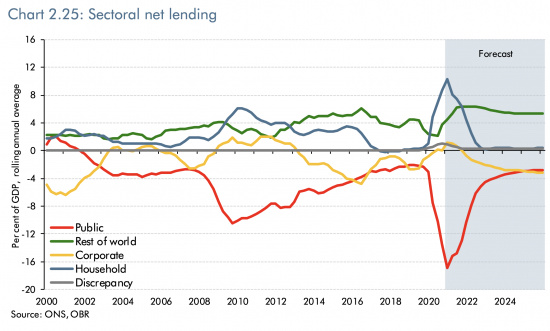 What this shows is which parts of the economy are borrowing at any time, and which are lending (which in these terms is the same as saving, because whether you appreciate it or not, if you save with a bank (for example) you are actually lending it your money, which they then owe back to you).

As is apparent, the government borrowed massively in the last year, and entirely appropriately so, and at no real cost because almost all of that was covered by money creation which need not have interest paid in it. The result was that all other sectors within the economy as a whole saved, with households doing more saving than anyone else. The House of Commons Library showed the change like this: 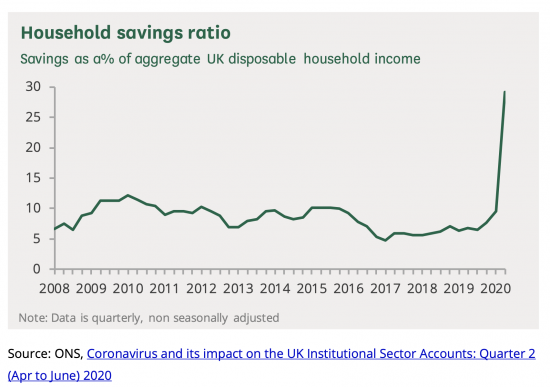 We do not know who precisely saved the most as yet: the data is not available. Past trends show, however, that the already-wealthy will have saved the most. The simple consequence is that inequality will have grown considerably.

The evidence of this is all around us. House prices are at record levels. And stock markets are pushing at all-time high levels.

The fact is that the money the government created to meet very real need during the crisis has to go somewhere if it is not taxed or claimed back through additional government borrowing - which it has not been. So it has gone into asset bubbles as well. And before it is said that most of the subsidy did not go to the wealthy, I know that is the case. But those who received the spending from the government, by and large, spent it, because most people on what might be called ordinary levels of income have what are called as high marginal propensities to consume - which means that almost all they get in income is spent again. We know that because they have very low savings: 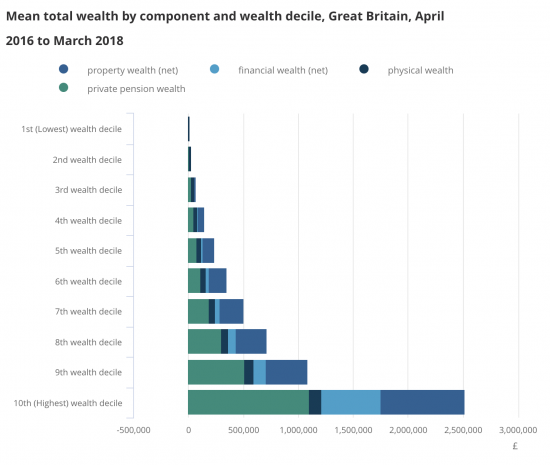 The spend keeps going until it meets someone from a higher income bracket who need not spend it. Then it becomes saving. And that is what has happened during Covid.

As I have shown, there was massive capacity to tax wealth more in the UK economy before Covid because the effective tax rate on income is about ten times that on wealth, on average, meaning that when both increases in wealth and income are taken into account the true UK tax rate across income deciles is: 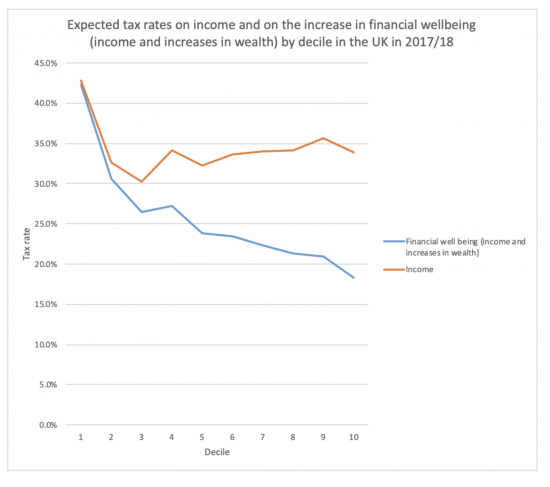 The wealthy can simply afford to pay more. This is not because there is anything to be paid for. There isn't. It's simply because they are wealthy and we need to tackle that inequality which is harmful to the cohesiveness of society.

I tackled this a year ago in my Tax After Coronavirus (TACs) project. I listed the options then. The posts on that issue included:

I stand by all those recommendations. We are creating a massive wealth imbalance in the UK that right now only more tax can address.

But, and I stress this very strongly: there is no reason for the government to save the resulting revenue. It has nothing to pay for from Covid. What it needs to do are three things:

This is not paid for from additional tax: the additional tax removes the impact from the economy. And it really is vital that the left get its collective heads around this.  Only then can we build the sustainable economy we need post-Covid.