Council tax is the main tax charged by local authorities in the UK. This commentary relates only to that part of the tax paid by households and does not concern the charge to business.

The comments made here relate only to England and Wales: different arrangements apply in Scotland and Northern Ireland and those in Wales do differ in some ways from those in England.

Council tax was introduced in haste in 1992 in Scotland and 1993 in England and Wales. It replaced the deeply unpopular community charge, or poll tax, which had, in turn, replaced local rates in England and Wales in 1990. Unlike the rates system, which was supposedly based on the rental value of a property the council tax is, again supposedly, based on the property's market value, albeit that which it had in 1992 (even if it had not been built then).

By law band A tax owing has to be one-third of the tax due on Band H in England.

The average Band D council tax in England - which is the average sum due - has changed as follows over the last decade: 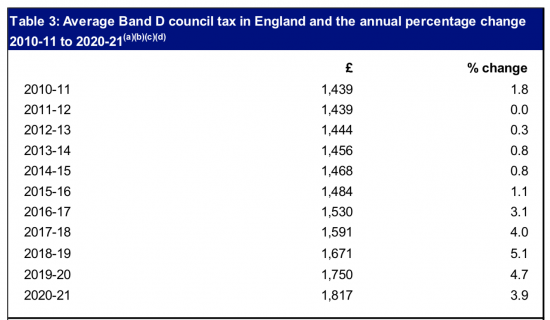 The taxes due in each valuation band are always related to those due on Band D, according to the following formula: 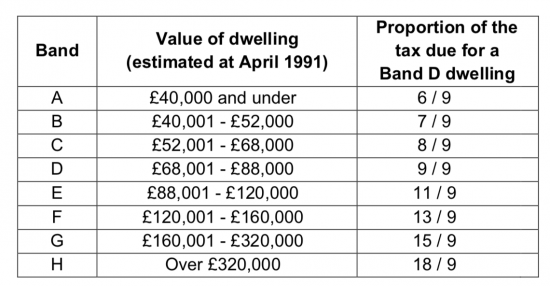 This is where the issue becomes very significant for the purposes of wealth taxation. What is readily apparent to even the most casual observer is that to run a taxation system based on 1992 property values makes no sense: the opportunities for the wrong tax rates being paid is enormous. This tax is by no means as efficient as many claim as a result.

It is apparent that there is a massive disparity in earnings in this country. In the case of wealth the disparities are even greater.

In that case council tax is deeply regressive simply because insufficient progressiveness is designed into it.

There are three very obvious immediate reforms that are possible to council tax.

First, there could be a revaluation. Online data now permits this with ease and low cost, subject to appropriate appeals procedures.

Second, the idea of eight or nine bands has to be abandoned. There is no reason why another eight or more could not be added at the top end, increasing the sums due on high-value properties quite considerably, and providing a better basis for the taxation of wealth (with those in retirement being allowed to roll up liabilities until death).

Third, more bands and exemptions are required at lower level: it is wrong that households likely to have very low income should pay two-thirds of the sum due on an average house when they are unlikely to have the capacity to pay that sum, whilst those with low incomes and who are on essential benefits should be exempted from this tax, which is not universally the case at present.

In the longer term the tax needs replacement: it is almost certainly the case that a land value tax is fairer and more efficient. But in the shorter-term the reforms noted could address a great deal of the inequality that this case creates.