Why we do not have a Covid debt crisis

There is much talk this morning about the Covid debt crisis that the UK faces and the fact that this is going to require cuts after Covid.

This is not true. I explain why in my free eBook 'Money for Nothing and my Tweets for free', but this is too important not to repeat the story again.

Let's look at the finances for the 2020/21 financial year, which are not yet finalised so these are estimated figures, as yet.  I have used the Office for Budget Responsibility year-end projections for 2020/21 when doing so, plus QE data from the Bank of England. I know the ONS has issued slightly differing borrowing data now, suggesting the outcome a bit better than the data I used, but ONS data tends to be revised so I stuck with the OBR.

Doing so I got this data: 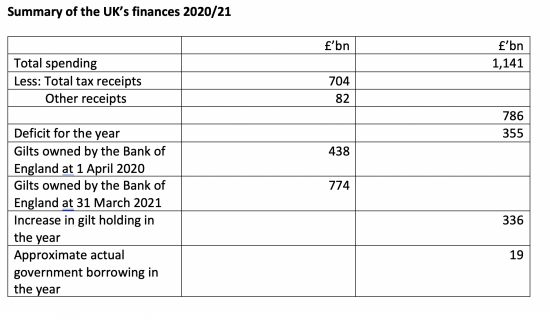 Tax data should be obvious as to its meaning. Other income includes interest the government pays itself on the bonds subject to quantitative easing.

The data on the value of the bonds that the government owns as a result of the QE programme comes from the Bank of England. And, as will be apparent, that programme can either be seen as injecting £336 billion of new money into the economy in the year, or as cancelling £336 billion of bonds.

The net result was that actual borrowing did not go up by more than £19 billion in the year. It may have been less. And for reasons that I have explained here, that new money injected by the Bank of England into the economy can be completely costless into the future, entirely at the Bank of England's choice. There is no requirement that any interest at all be paid on it.

In other words, Covid has been paid for. There is no residual cost. No one needs to be repaid for the new money created - and most especially for the new debt created, when £19 billion was an almost record low addition to the national debt in a year. There is, quite simply, no crisis to deal with. And that's all because Covid was paid for with new money creation.

I am not saying there are no consequences of this new money creation: there are, in the form of increasing inequality. I will deal with that issue in a following blog. But there is no government debt crisis now. And there is no reason for cuts. Nor is there any reason to say that interest rates need destabilise the UK government's spending programmes. All these claims are simple falsehoods.

So what is the Treasruy's claim that we face a crisis all about? It is simply to suggest that we must have cuts because it believes that the government is too big in the economy. It thinks we do not want healthcare, education, a functioning justice system, measures to tackle climate change, action to create jobs or any other of the multitude of things that people in this country know are essential. What it thinks we really want is no borrowing, even though it cannot measure borrowing correctly, or price it appropriately.

There is here a fight for the soul of the nation. There is in play a battle between small-minded finance and social need. The trouble is that almost no one who should be on the side of social need is making the argument that I do. And that is what is deeply worrying, Almost all opposition parties buy into the Treasury view of the economy. No wonder we are in crisis.