As the Guardian has noted this morning:

The highest paid 1% of British earners received nearly 17% of all the country’s income ahead of the Covid-19 crisis, according to a study making allowance for the concentration of taxable capital gains among the better off.

Analysis by Warwick University, the London School of Economics and the Resolution Foundation of previously confidential HMRC data showed that the top 1% had a growing and much bigger slice of income than previously thought.

The study said that some taxable capital gains were really sources of income and were heavily concentrated among the well off.

Official data showed that in 2017-18 there were £55bn of taxable capital gains recorded — a more than doubling of the figure five years earlier once inflation was taken into account. The majority of the taxable capital gains (£34bn) were received by 9,000 individuals, who each made gains of £1m or more.

The summary of findings in the actual report (of which I had an advance copy) was: 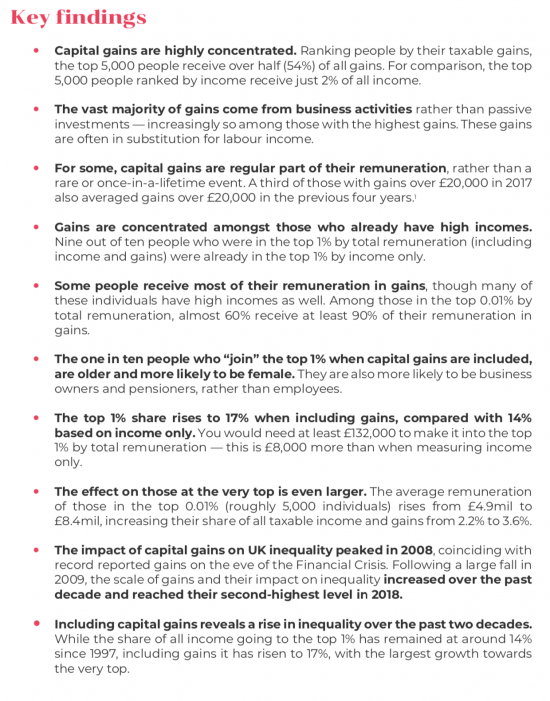 This, of course, confirms why I have found that the effective tax rate of the best off is much lower than that which appears to be the case based on income alone, which is a finding that underpins the Tax After Coronavirus (TACs) project.

This is good work from Andy Summers at the LSE and Arun Advani at Warwick that helps shatter some of the myths around this issue and makes it very clear that alignment of income tax and capital gains tax rates is essential, as is an investment income surcharge.

The summary report is here.

The academic report is here.

For those watching on 21 May there is a webinar at 11am UK time on this issue here.