It is time to tax the rich

The Guardian featured an article yesterday that was promoted with this tweet: 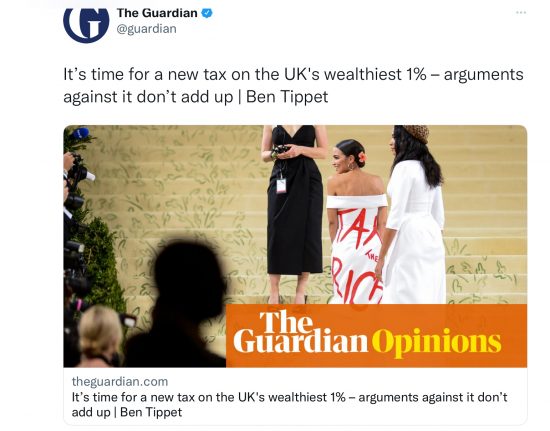 It seems like AOC did a good job with that dress, but I was more interested in the message in the underlying paper that supported the claims in the article. Ben Tippet and his colleagues said in that paper that:

Those are some pretty dramatic rates of assumed evasion: I suspect that the rates would be at the low end of this scale, even given that the rich are very good at tax evasion, as research has shown.

It so happens that this estimate is in the range of potential tax revenues that I estimated in 2020 when I suggested that if the tax rates on income and the increases in wealth some have enjoyed in the UK were equalised then £174 billion of additional ta a year could be raised in the UK. As I suggested then, and as this new research finds, there is considerable capacity to tax wealth in the UK.

Let’s be clear why we would want to do this. It’s not because we need extra revenue to fund government spending: as modern monetary theory shows, in a country like the UK with its own currency and central bank and which only notionally borrows in that currency there is no central government spending that is funded by taxation. In that case the need for this tax is to tackle inequality. It may also have an impact in controlling inflation, most especially within asset prices, which has been out of control when consumer price inflation has not been.

And it is very apparent that tackling inequality is now a priority. Many of the crises that are now being faced within society are the result of economic distortion, including most especially the enforced reduction in wage rates as a part of national income since the 1980s as a part of the relentless neoliberal desire to increase the share of wealth going as profit to a few in society at cost to most who have to work for their entire living. Something like 10% of national income has been redirected as a result (the precise sum can be argued over; I think that figure pretty certain).

That’s more than £200 billion a  year now that is not going to those who might I once have enjoyed it. I think additional taxation  of wealth is part of the rebalancing equation that is now necessary to correct for this. That is why I featured it so heavily in the work I did in 2020 on Tax After Coronavirus  (TACs). And such is the priority I have to add that we cannot wait for a wealth tax. We do instead need to start with adjustments to existing taxes. This list would do for starters:

We cannot afford to wait to address this crisis. People are living with the daily reality of low pay, low benefit and high tax now at a time when they face the most profound crisis of all, which is in their inability to provide for themselves and their families.

Redistribution is not the only solution to this problem: real wage increases are also essential. The rebalancing of the economy has to happen as well. But, redistribution is an essential pathway to achieving this goal now, and can be done.

The time for greater taxation of wealth has arrived.