The increase in wealth inequality during Covid is not an accident: it is a design fault that needs to be corrected

The Resolution Foundation has published a report this morning in the massive increase in wealth that the wealthiest in the UK have enjoyed during the Covid crisis.

The Guardian report makes clear, albeit inadvertently, that the Resolution Foundation does not understand the reasons for this. As they note a Foundation spokesperson saying:

The Covid-19 crisis has seen a highly unusual combination of a sharp reduction in economic activity, and a sharp increase in household wealth. Many families have been forced to save rather than spend during lockdowns, while house prices have continued to soar even while working hours have plummeted.

But this is not the reason for the increase in wealth. Savings have happened, of course. But the real reason why that has happened is not because of savings in season ticket costs, or on nights out. Nor has house price inflation happened by chance. Instead these things are the direct result of the government running substantial deficits whilst simultaneously denying people the chance to save with the government. This has forced money into cash accounts (which have grown in value, enormously) and private sector, speculatively based investment, including housing.

It is a shame that the Resolution Foundation do not understand this. It is one of the many left of centre think tanks in denial on modern monetary theory (MMT). If it wasn’t it would understand the simple fact that government deficits always increase private wealth. What they are documenting is not in that case a surprise. It is an inevitability. Government created money has either to be reclaimed by it through borrowing in the short term or tax in the long term, or it stays in the economy where the impact of multipliers means it inevitably ends up in the hands of the already wealthy, even if not paid to them the first instance. This is what has happened here.

Those gains they have secured have, because some have been saved speculatively, increased in apparent value over and above the sum injected into the economy by the government. The multiplier effect appears to be something like threefold.

As the Resolution Foundation has noted, those at the lower end of the income spectrum have not gained, at all. On average they have dissaved: 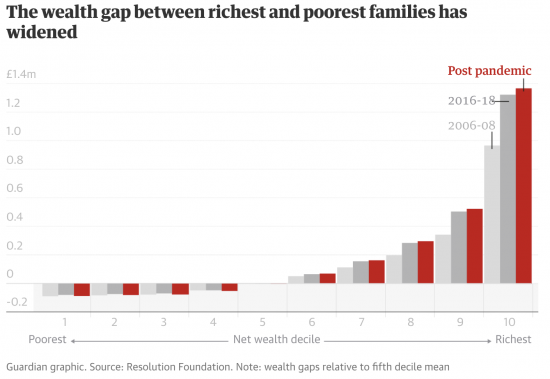 I predicted this last year. Doing research then on data for the years 2011 - 2018 I showed that if the increase in capital value was considered to be income (as it is) then the overall tax rate was deeply regressive: 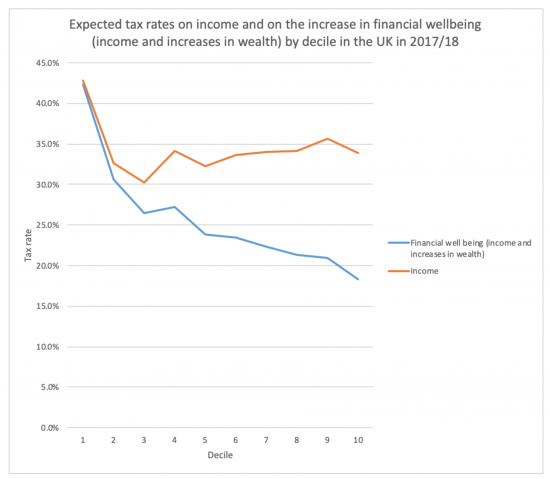 The wealthiest not only gain the most, they pay least tax.

The answer is obvious. We need to tax wealth more. But since we have no effective wealth tax and it would take time to create one what we instead need to do is tax the income from wealth a lot more. As it us, almost every firm of income from wealth is taxed less and enjoys more reliefs and allowances than income from work does. That is, straightforwardly, wrong.

I explain what needs to be done in this series of blogs:

The advantage of MMT is that as pure theory it explains this. The Resolution Foundation miss out by not comprehending what is actually happening. I hope that they will, soon. It is essential that this inequality is tackled, but that requires that its cause be properly understood as well.