There are such things as good accountants

As many readers here will now be aware, amongst my other activities I am a columnist for AccountingWEB, of which I was a contributing editor for many years.

I have an article out there for which the headline looks like this:

In summary, my argument is that when lockdown ends and furlough is over a very large number of people will find themselves unemployed and of those quite a lot will realise that they did not want to go back to their jobs anyway. They will, instead, want to go out on their own as self employed people. And they will. I am already meeting people who are telling me that, from a distance of two metres or more, of course.

In that case there could be a rash of new businesses starting in the UK very soon. And they will need help from good accountants.

And let me stress, there are such things. Indeed, much as I often criticise my own profession (and I will continue to do so whenever it is appropriate) the best accountants play an enormously useful social role.

Barrister Claire Quentin (writing as David Quentin at the time) very clearly expressed this in an article on the role of tax advisers which she summarised in this diagram: 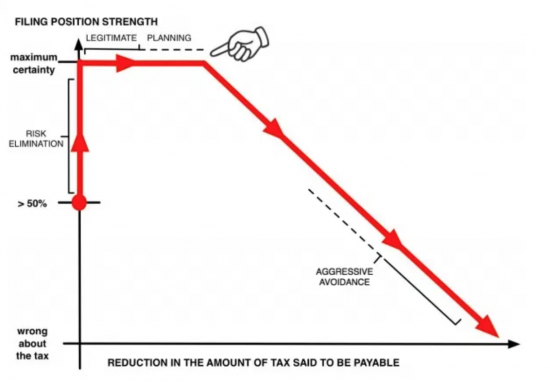 A client meeting an accountant for the first time does so at a point midpoint on the Y axis. They do not know what to do to get their business going. The chance that they will make a mistake is high. A good accountant can massively reduce their risk and improve considerably the chance that the person will be tax compliant by driving them up that access by simply ensuring that they comply with all the right tax rules. The risk in the business and for society as a whole is reduced as a result, which is precisely why good accountants are useful.

The accountant can then also, wholly legitimately, point out all the rules that are within the spirit of the law that permit that business to reduce its tax bill if it wishes to do so: this is the flat red line at the top of the graph. And I am not condemning this, even when I want those rules changed.

Accountants only become a problem when the tipping point is reached and they begin to adopt what Claire Quentin calls ‘uncertain tax filing positions’, which mean that they put in tax returns that include claims that they know are uncertain legally. These can embrace varying degrees if risk, as she shows on her downward sloping line on the chart, which ends in the realm of tax evasion.

The critical point is that an accountant need not advise clients to take these risks. And they can refuse to participate in them. I have not knowingly done so when in practice (I allow for the fact that not every client might have told me the whole truth). Those that won’t abuse tax law and who do encourage tax compliance provide a socially valuable service. Sometimes we need to recall that. They deserve to come out of this in a good place.