The Office for Budget Responsibility says of itself that:

The OBR was created in 2010 to increase the transparency of the public finances and to provide independent analysis of the fiscal outlook and the uncertainties lying around it.

It's announcements on the impact of coronavirus today make clear how far that is far from the truth. In summary their scenario analysis relies on these assumptions: 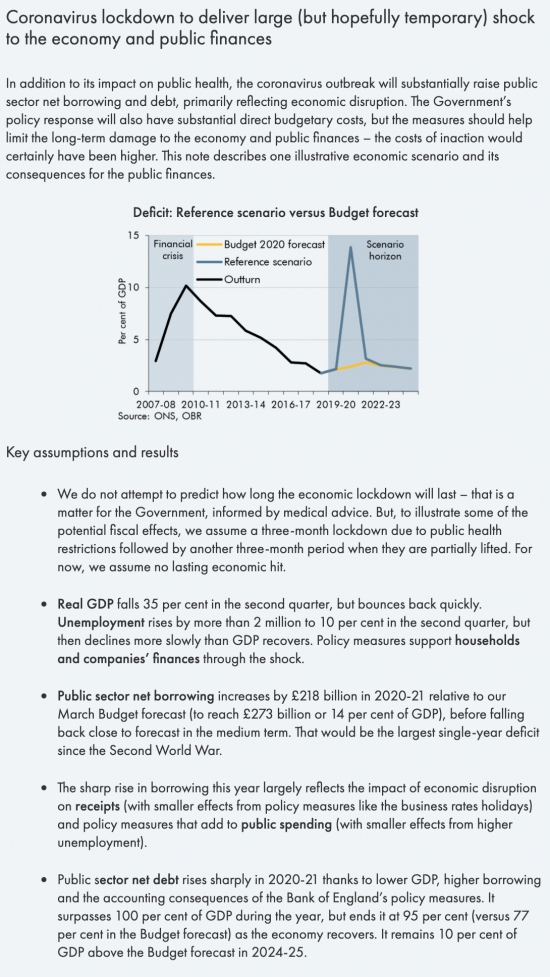 This is stuff from the world of fantasy. Tolkien and C S Lewis could not do better. The idea that we will lockdown for three months and then 'bounce back quickly' is, frankly, absurd. So too is the idea that there may be 2 million unemployed during this quarter.

What they are predicting is a V-shaped crisis. In other words, and as they plot it (upside down from the way many people might imagine things, hence the usual V description which is inverted here): 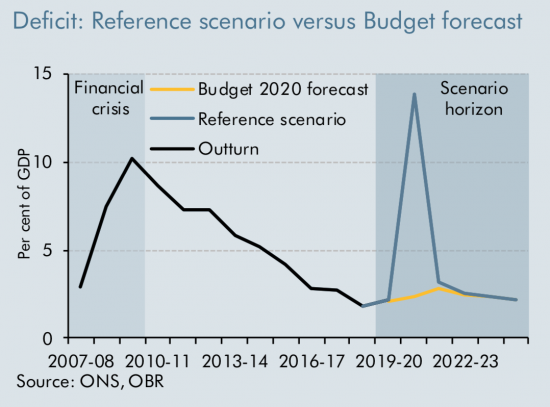 They claim we will have a little disruption that will add around £260bn permanently to public debt, but otherwise everything will go back to normal quite soon.

Politely, I think that is impossible. It need not be impossible. That could have happened. Indeed, it might well have happened if the government had guaranteed loans of 100% to smaller businesses, in particular, on Budget day on 11 March; the self-employed had been protected straight away as they were in Germany; mortgage, loans and rent holidays had been legally required, with an absolute loss arising on rents to landlords and on interest to banks and other lenders; and if the so-called furlough scheme had paid out soon enough to actually save businesses under stress. But none of those things happened.

We know that so far 1.4% of businesses applying for government backed loans have got them and less than £1bn of the promised £330bn has been paid out.

We know that the furlough scheme will not open to claims for another week as yet, and heaven knows how long payment will take thereafter.

We know that the self-employed will see no money until June.

We know that literally millions are falling in the cracks between schemes or have been deliberately excluded.

We know that millions are already claiming additional benefits as a result.

And we know that after a crisis people stop spending: demand will not recover because that will be impossible, especially as non-waived rent and loan arrears will be oppressing people, whilst businesses will be burdened by new debts that will crush those still in operation.

But it's alright because we also know that by and large banks and landlords are doing just fine.

In the meantime it's hard to guess how many small businesses will fail. Even if re-opening starts in June, and is gradual, I suspect it will be hundreds of thousands that may not make it. They will have simply become insolvent in the meantime and in the process of trying to start again will run out of capital: what re-opening will create is the classic problem of over-trading with too few resources and those that get through the immediate crisis will then fail without help - which will have to be grants and not loans by then.

So what is the chance that real unemployment is 2 million this quarter, ignoring those furloughed? Zero, I would say.

I think David Blanchflower is much more likely to be accurate with an estimate of 6 million - which has been my ballpark estimate for a while now.

So the OBR estimate is wildly inaccurate and hopelessly optimistic.

We will not lose 35% for a quarter: we are facing a long term recession, if not a depression or slump without government action. 20% loss for some time is entirely possible.

And the impact on the government finances will be vastly bigger than the OBR suggests. It took a decade to get from £1 trillion to £2 trillion of gross debt (before QE) after the last recession. This time expect it in a couple of years, at most.

So what is the OBR doing here? It's being a propagandist for the Treasury. And in the process it has blown apart for ever the idea that it is an objective or independent commentator on the public finances. It's nothing of the sort.

NB I am discussing this on LBC at 3.30pm this afternoon.