The government’s misinformation on Covid-19 deaths is unforgivable

I am not going to accuse the UK government of lying to us about Covid-19 deaths, because that would be too kind to them.

980 deaths were announced yesterday, each a story of anguish for all those who died and their families and friends. My sympathies go to each of them.

Unlike other European countries, the trend in UK death rates remains upward. This data from Hohn Murdoch-Burns at the FT makes that clear: 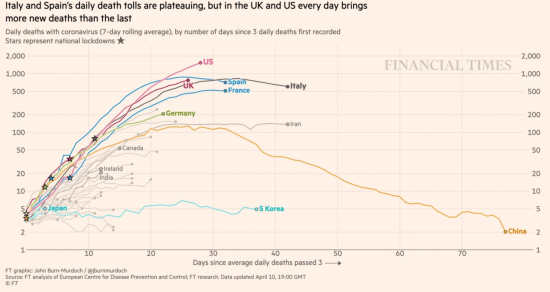 But the data is also grossly wrong. As Chris Giles, also of the FT has made clear, the scale of under-reporting of deaths is staggering, simply by comparing with ONS data subsequently issued: 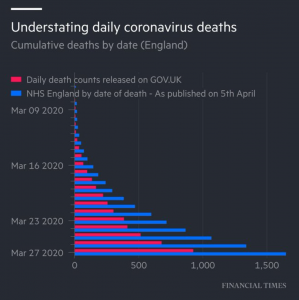 There are several technical reasons for this under-reporting.

First the figure for UK deaths excludes those who have died outside hospitals, and we know many are dying in the community, and most especially in care homes.

Second, the data excludes those who would not have died but for Covid-19 because of treatment of those who have coronavirus. I will be astonished if deaths from other causes are not rising, significantly.

Third, the claims are hopelessly out of date. As the Centre for Evidence Based Medicine at the University of Oxford noted yesterday, the data for the NHS in England noted yesterday was actually as follows: 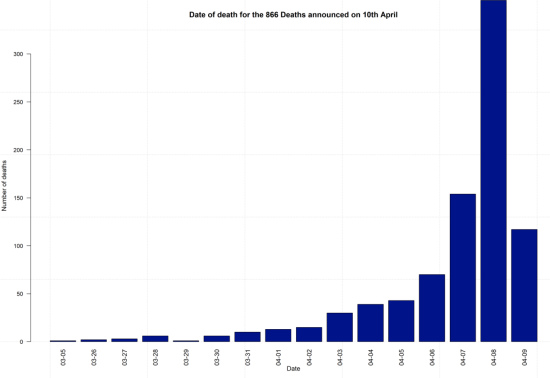 In other words the figure for reported deaths was in no way a reflection of the truth yesterday. And on a known rising trend it was clearly a gross under-representation of that truth. Many more deaths area still to be reported as this chart from the same source makes clear: 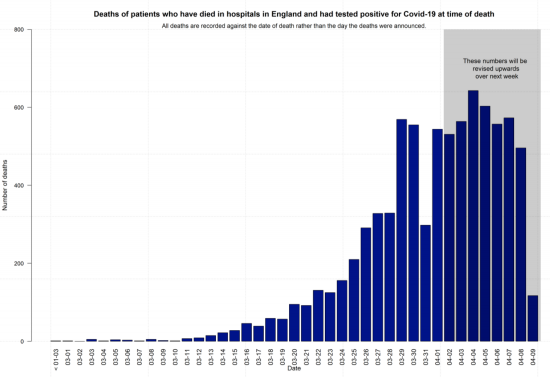 The government is not continually acknowledging this. I suspect it is desperate to keep deaths at less than 1,000 a day. I suspect it is deliberately suppressing data as a result. I am sure that it knows the situation is much worse than it is reporting. I also very strongly suspect that it has no idea how to get out of this mess of its own making.

Eventually the number of Covid-19 deaths are going to be known.

Eventually the rate of abnormal deaths will also be known: the Office for National Statistics issue death-rate data weekly, and it is no more than two weeks out of date. The falsification of this data will become apparent.

What matters right now though is how and when that data is amended. And this is not just a technical issue. It has very real consequences. The argument has been made by the government that lockdown in the UK cannot be ended until the death rate declines. I am sure that is right. But we’re not being told the true death rate, or when it might be happening. There is, instead, a substantial delay on our being told anything like the true data. And as a result when the end of lockdown might be considered is deferred.

This misinformation comes with a considerable cost.

Some of that cost is real. The government will spend more supporting people to not work as a result of this policy of misinformation.

Some will be seen in yet more business failures as lockdown continues.

Most worryingly, the deep human cost of isolation will increase, and we as yet have little idea of the consequence of this, but I think it will be staggering.

And all these costs will increase because the government will either have to admit it has simply not told the truth, or it will have to take time to let its untruths unwind.

Whichever way it is looked at, in that case this policy has been one of extreme folly.

I deeply resent not being told the truth. Day in and day out the government is providing false data to the country at present which is reported as fact when it is nothing like that.

Our Covid-19 deaths are far worse than the government represents.

This government’s failure, in the European context, is far worse than the data yet tells.

The real cost of this misinformation is going to be massive.

And I am angry about that. This government is engaging in a propaganda war it is bound to lose at cost to us all and is doing so simply to protect their own incompetence.

That is unforgivable. I hope they are not forgiven.