In one hour today we moved from recession, to depression and then on to slump

There had to be a statistic that would make people appreciate just how serious the current economic crisis is. That statistic has now arrived. It is the increase in the number of people registering as unemployed in the USA in the last week. This was 6.65 million people.

The Guardian has this graphic to demonstrate just how significant this is: 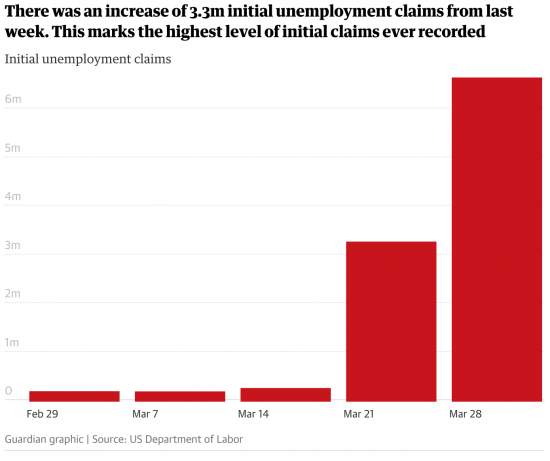 9.95 million people have registered as unemployed in the USA in a fortnight.

To put this in context the Guardian notes that:

William Rodgers, former chief economist at the US Department of Labor ... calculates US unemployment, 3.5% in February, has already reached 17% in just two weeks and that rates for African Americans have soared to 19% from 5.8%.

One in six Americans is now out of work.

This will get worse.

Translate this to the UK with a workforce of some 33 million before the crisis began and it is likely that real UK unemployment, government schemes apart, will rise to more than 5.5 million people very soon, and is likely to get worse from thereon. I am not going to guess by how many, but when it becomes apparent that many more businesses will fail as an attempt at recovery starts sometime this year I suspect the increase to be significant and will be millions more and not hundreds of thousands.

This takes us out of the area of recession.

It takes us beyond depression.

This is a full-blown slump.

No one now in any position of responsibility has ever seen anything like this. Nor have we planned for it.

What that means is that some decidedly lateral thinking, and very deep understanding of the real nature of economics, money, tax, business and its financing and how we get people to work again is required.

I am just hoping it is available. There is none of that around the Cabinet table, for sure.