I have already commented on the Government Expenditure and Revenue Scotland statement, issued today.

What the statement suggests is that Scotland ran a deficit on government income and expenditure of £12.6 billion (including North Sea revenue) and £14.0 billion without that revenue to 31 March 2019. The UK for this period had a deficit of £23.5 billion.

I want to put this in context. This is the data on UK net regional (and you'll have to excuse m,e calling Scotland, Wales and Northern  Ireland regions when they aren't) to 31 December 2018, which is what the Office for National Statistics, in their usual massively unhelpful way, issue: 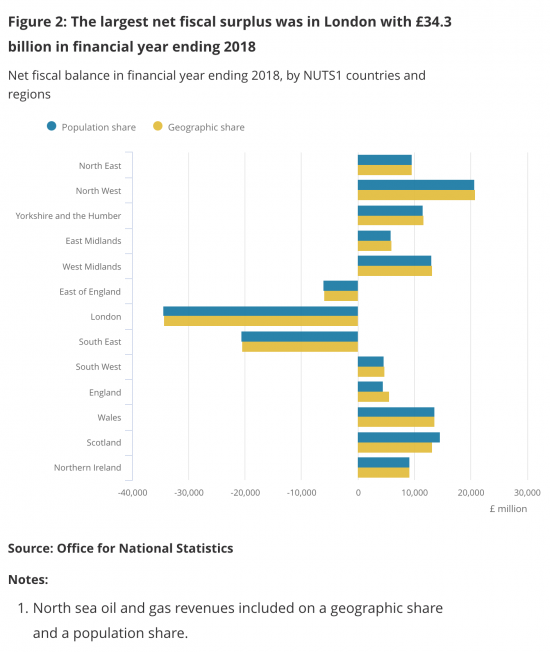 The data is not consistent with GERS: the overall deficit is £41.8 billion. And Scotland is still, despite that, still around £14 billion depending on the basis of apportionment.

The first thing to note is that Scotland's deficit is significantly smaller as a proportion here than in GERS. Please don't ask me why: I cannot tell you.

More important is the fact that Scotland is not alone in having a deficit. Before anyone says the Scots are a drain, then so too is the North West. And in fact anywhere that does not enjoy the 'benefit' of recording the UK financial services sector and the profits of most of its companies.

I have to tell you the Barclays data was wrong.

And I also have to say that Barclays could not have made more money by closing all its operations but that in Luxembourg because all Barclays Luxembourg reported was money syphoned off from elsewhere in Barclays.

And that is exactly what this charade from the ONS and in GERS is reporting. It is showing that London syphons of money from the rest of the country.

And all that means there is a lot of profit in London that is not anywhere else.

So incomes are high in London, but actually, the rest of the country supports that by actually doing the work that is needed, at much lower income, to keep the country going.

And all that happens because of the o0ther factors already noted.

And what you get is a scenario where wealth is sucked out of the country to be recorded in London, just as Barclays sucked income from all over the world to record in Luxembourg in 2013. But that did not mean Barclays earned that income in Luxembourg. In fact, I am sure it did not.

What this shows is that data does not necessarily record where the value is. Economists and accountants can distort the facts really easily is what I am saying.

And that's why all these claims are just wrong.

Scotland creates value. Lots of it. I am sure.

But in that case I'd ask an even more important question. Does London? And if it does not, then you have the answer as to why it wants to keep all these apparently economically hopeless locations under its control. It's extracting what in economic terms we call rents from all of them - Scotland included. That's leach like behaviour.

And then Scotland is blamed for its part in this. And it's almost certainly a wholly false accusation. That's GERS for you.