Barclays: the bank that just loves Luxembourg and Jersey, but not the UK

Barclays has put out its first country-by-country reporting. This is not a statutory report: it has been published in anticipation of the requirement that banks produce this data for results from July 2014 onwards.

As the creator of country-by-country reporting I thought I should take a look. This is my analysis of what Barclays has published: 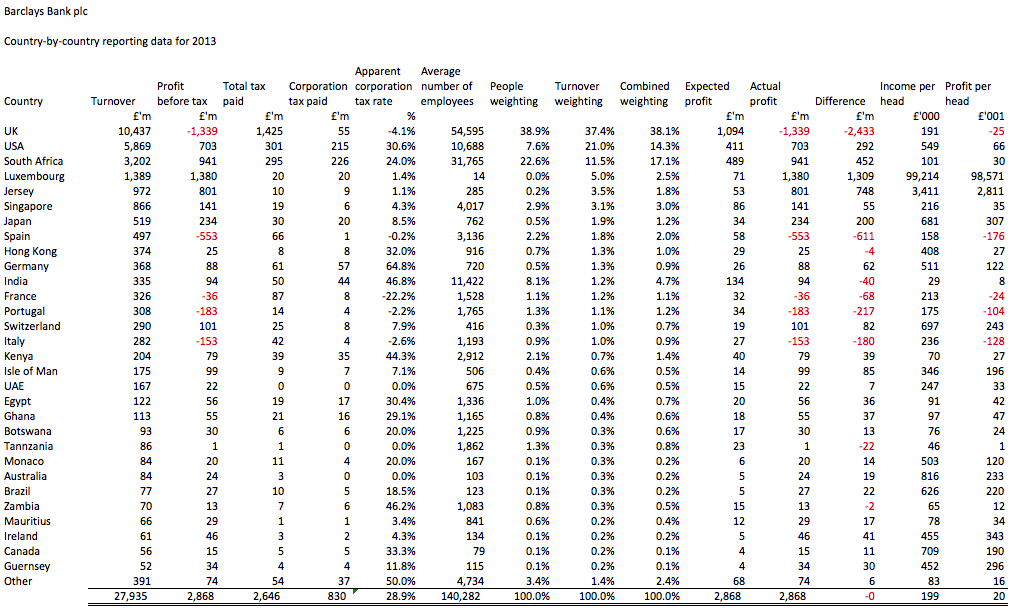 Click on the image to see a bigger version. The Excel file is here in case you want it. Barclays CBC 2013

I stress, the underlying data is from Barclays bar one thing. They say this:

I have therefor allocated all the £8.5 billion of turnover and £6.2 billion of double counted profit to the UK, as that is the only clear clue they give me as to what to do with it. They could have provided a better and clearer analysis, but they don't.

Having done this I then proceeded to ignore all the data that Barclays publish on VAT and NIC paid: this is all nonsense. Those are business costs like any other and are deducted from profit and subject to tax relief in their own right. They have no role to play in considering taxes due on profits.

What I wanted to see is whether or not it was likely that the claimed allocation of profits and losses by Barclays accords in any way with the likely allocation of profits by Barclays to the UK, in particular. To do this I treated Barclays as one single economic entity (which, as a matter of fact, it is or it could not publish a statement like this, so I suggest those arguing on this point are wasting their time). Then I worked out the ratio of sales by country and ratio of staff employed by country. Barclays do not provide data to calculate assets by country. I averaged the two ratios for good reason, which is that they can be very different due to the games companies can play. Luxembourg is an example here where sales are very high and staff almost non-existent. The result is the best approximation I can get to of what is called a unitary formula apportionment allocation of profits.

You will immediately note some surprising differences. Suddenly the UK does not make a loss, which Barclays admit they report in this country. Instead a profit of almost £1.1 billion is reported. And Luxembourg does not make a profit of £1.38 billion as is claimed in the original data, but ends up with just £71 million. Jersey also drops, in that case from £801 million of profit to £53 million.

It could be argued this is misleading in some cases: Spain, Portugal and Italy have all reported losses and it is known that these are difficult markets to work in. But then it has to be remembered that there is no independent and free-standing decision by Barclays to be in these places: it was a corporate decision to be in those countries and so the losses should rightly be shared - because this is a single business, as a matter of fact, where cross subsidy really does take place, as a matter of fact.

The real problem is though that the biggest cross subsidy of all is very clearly from the UK. It is complete nonsense for Barclays to claim they make a loss in the UK of significant amount (as seems likely) when in practice more than equal and opposite sums turn up, virtually untaxed, in Luxembourg and Jersey within their own accounts.

So, what is happening? I have a long list.

First, Barclays is, very politely laughing out loud at the UK and is failing to pay its way as a UK bank. So much for the contribution the City makes: this bank is not making it. And ignore those other taxes again: Barclays is employing people who would otherwise be employed elsewhere. The NIC would happen in another company if not Barclays. The same may be true of the VAT and as for the banking levy, that's a tiny contribution to the cost of having effectively been bailed out by the UK taxpayer in 2008 - which all banks were as it was the system as a whole that failed. So let's ignore claim that Barclays is contributing to the UK in these ways: it is not doing anything more than it should.

Second, Barclays is a massive user and maybe abuser of tax havens, and especially Jersey and Luxembourg.

Third, it is clear that transfer pricing of head office operations is not taking place effectively in the case of this company. HMRC must have the power to say that a company must reallocate costs to the group it manages from the UK or a mockery is made of our tax system. The need for reform in this area is obvious.

Fourth the question has to be asked as to why we are so keen to have companies headquarter in the UK when it is very clear that many other countries benefit more than us by not having Barclays' head office in their domain. Barclays could bank here by all means, but candidly we would be better off without their head office.

Fifth, the evidence is clear: country-by-country reporting delivers invaluable data, as I always suspected it would. We could do with more from Barclays but even at this level what we can say is that the internal allocations of income and profit between Barclays group companies appears to make no sense at all.

Sixth, we can ask in that case how the Barclays's auditors (PWC) signed off these accounts as true and fair when that is the last thing they look to be.

I could go on, but you get the message: this analysis suggests that Barclays is massively under-declaring profit in the UK at cost to all of us. I estimate that the loss to the UK could easily exceed £150 million based on the above data. And in that case it is time for serious tax reform in this country.