There are a number of annoying issues one has to live with if engaging in discussion on Scottish economic policy. One of the biggest is the Fraser of Allander Institute. This is located within the economics department of the University of Strathclyde. In my opinion they have a habit of misstating facts to suit their own agenda. I will illustrate this using their latest blog on GERS, which is entitled ‘GERS Day 2: after the hullaballoo’. In it they say:

Every year when GERS is published, there is a new angle that seems to gain traction and ignite a debate about the accuracy of the figures.

This year’s is a rather misguided interpretation of the notional net fiscal balance produced in GERS.

These have been variations on:

Let’s look at this for a moment. First, just go to the GERS document itself. Look at Table 1. You don’t have to go far to do that. It compares the net fiscal deficits for Scotland and the UK:

That is what GERS wants to you do. There is no other explanation for the juxtaposition of the data in that way. In other words, if the Fraser of Allender has a problem they should aim it at GERS. It's GERS that is wrong. But they don't say that, and you have to ask why.

And second, those of us asking the questions they note have done so because we have said the suggestion that the data makes, as presented by GERS itself and not by anyone else,  is absurd. So we're not misstating the data to claim what we say. We know that GERS misstates the data and we have said so. But the Fraser of Allender seems not to have noticed that. What it is saying is that those of us who have criticised GERS because what it says is wrong have got our facts and statistics wrong. Which is utterly politically absurd. Or incompetent. Or both.

And then note that instead of saying why GERS is so hopelessly wrong, as I have done more than once, they accept it at face value. And what they instead say is that GERS should be read in the context of  ONS data (which I also drew attention to, a day before them). This, they suggest, makes clear that the issue is more complex than GERS implies, saying:

The latest ONS figures are for 2017-18, so they are not quite the same as the 2018-19 GERS figures, but it illustrates the key error when pulling together a ratio of the Scottish figure vis-à-vis the UK as a whole. The ONS figures show that:

The UK net fiscal balance is therefore a sum of these surpluses and deficits. .... Comparing the £bn figure for Scotland to the equivalent UK figure is simply not a valid comparison. Statements such as “the GERS figures imply that Scotland is responsible for 60% of the UK’s deficit” are just statistically meaningless.

I agree. That claim is meaningless. But instead of criticising GERS for making it The Fraser of Allender again criticises its critics. You need to ask why. As you need to ask why it then comes up with this claim:

For a more accurate statement about the relative importance of Scotland to the overall UK fiscal position, we could say, on the basis of this ONS 2017-18 data that Scotland makes up 13% of the total deficit contributed by the 9 regions of the UK who raise less in taxes than they spend on public services.

This is based on this chart in their post: 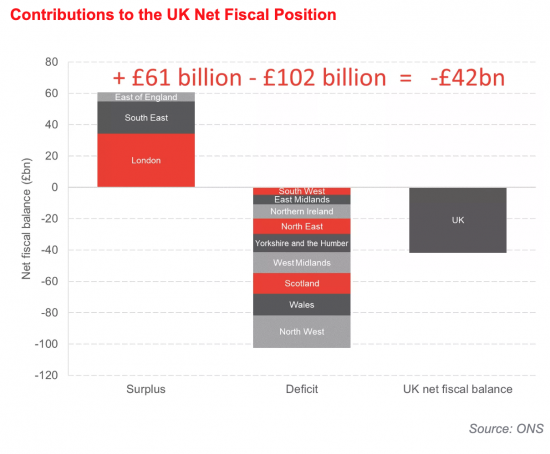 Let me be quite blunt: you cannot say what the Fraser of Allander says we should. I'll spell out why since they seem incapable of reading anything correctly.

Firstly that's because that's not what we're discussing. We're discussing the political economy of the GERS data, and not ONS data. So they utterly miss the point.

Second, that's because the ONS data is just as wrong as the GERS data. It also ignores the fact that value is not recorded where it is created in the UK, as I have explained. But the Fraser of Allender seem to have no awareness of this.

Third, their comment pretends Scotland is just another region of the UK, and it is most definitely not.

Fourth, and perhaps most importantly, this suggestion avoids any requirement to mention why there is a surplus in the south-east of England and nowhere else - or in other words, what we are being told to do is not only accept that the data is right (when it is not) and that the political and economic bias that gives rise to this data is also right, and it is not.

Instead the Fraser of Allander say:

As an aside, there is a serious – if albeit boring – point to be made here. Each year, the level of misinformation and bad analysis around the GERS publication is pretty shocking.

I suspect I am in the sightline of some of this criticism from the comments made. So I will shoot right back and say three things.

First, the issues discussed are either political or about political economy. The Fraser of Allander, very boringly, appears to know almost nothing about the latter and they do not declare their bias, as most economists do not, on the former.

Second, if they had any economic credibility at all they'd point out that the GERS report was wrong for presenting data as it did, but they did not and so have not a shred of credibility to fall back on.

And third, they should be asking why Scotland might have a deficit that is about 55% of that of the UK as a whole if the GRS data is to be believed - in the way that they present it - instead of denying that fact. But they don't do that. Which is not just boring. It's a dereliction of their supposed duty to discuss Scottish economic data objectively.

And if you want to know why the SNP leadership don't attack GERS it is because they listen to too much that the Fraser of Allander say, and I suggest that's at considerable cost to the people of Scotland.

Bad academic economics, that does not reveal its political biases, and which asks the wrong questions of data whose credibility it does not question has led the world into all sorts of crises. And it will do the same for Scotland as well unless somebody stands up and points this out.

That's what I am doing, right now.