I've mentioned this before, but I'll do so again as I think this could be an important event - and it is free to NGO participants. The registration link is below.

International Tax Review have launched the programme for what will undoubtedly be one of the major tax conferences of 2012. The list of speakers, see below, includes some very well known names from all sides of the debate. In the year when TJN celebrates its tenth anniversary, this conference is a sure indication of how far we’ve moved the tax justice agenda from the shadows to the centre of discussion. John Christensen and I will be speaking, as will colleagues from development NGOs. Much of the debate will be about country-by-country reporting. 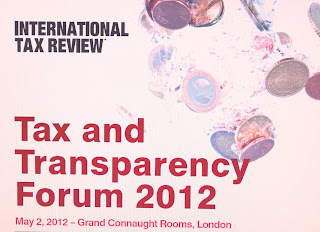 As they say of the conference:

“The financial crisis has changed everything. Now governments desperate for revenue are looking to close loopholes and claw back as much money as they can from taxpayers, through settlement or in court.

Meanwhile, the public mood has turned against avoidance as people take to the street to demand companies pay their fare share of tax. Development agencies such as Christian Aid and ActionAid, which have long argued that poor countries lose more through tax avoidance than they receive in aid, are pushing for country-by-country reporting, a standard which is soon to become a reality for companies in the extractive industries like BP and Rio Tinto.

The NGOs argue that tax is not simply a legal issue, it is a moral one, and it is not enough that taxpayers remain within the letter of the law, rather they must adhere to its spirit. Most multinationals remain sceptical about country-by-country reporting, but where it was once a niche issue demanded only by hardened activists calling in from the cold, now it is something companies cannot afford to ignore.

Tax transparency, country-by-country reporting, information exchange and transfer pricing rules are becoming increasingly important issues for taxpayers to consider in terms of their investors, their reputation and their exposure to risk. The issue will only continue to grow in importance in the coming years and, as such, it will become an increasing concern for companies looking more nervously at their bottom lines.

International Tax Review has decided to place itself ahead of the curve and is inviting taxpayers and advisers to join this crucial debate.

Our inaugural Tax & Transparency Forum brings together the biggest names and most prominent voices on both sides of the argument.

- As the new head of the OECD’s Centre for Tax Policy and Administration, Pascal Saint-Amans is arguably the most important figure in global tax affairs. Before taking up the job, he led the Global Forum on Transparency and Exchange of Information for Tax Purposes where he gained extensive experience in bringing together corporates, governments and NGOs to tackle tax haven secrecy.

- Clare Short was a Member of Parliament for almost two decades, where she served as Secretary of State for International Development under Tony Blair, before resigning over the Iraq war. She now chairs the Extractive Industries Transparency Initiative, a position which places her at the cliff face of the work on country-by country reporting.

You will hear from both of these individuals alongside corporate taxpayers from Rio Tinto, BP and Reed Elsevier, leading tax advisers, NGOs and Richard Murphy, the accountant who invented country-bycountry reporting long before it became such a crucial topic of discussion at International Tax Review’s Tax & Transparency Forum.

Why attend?
- Find out how tax transparency will affect your bottom line and what it could mean for your
corporate reputation
- Understand how new reporting standards could mitigate risk and help your investors
- Get an update on the latest developments in country-by-country reporting, transfer pricing,
dispute resolution and disclosure facilities
- Hear from the OECD and authorities about what lies ahead
- Voice your opinions, engage in dialogue with NGOs and debate an issue that is becoming ever
more important for taxpayers

NOTE: This event is FREE to all development NGOs with an interest in tax justice. Register here.”