What is the Tax Justice Network playing at by demanding that the UN take over responsibility for international tax deals?

I noted the concerns I have with the credibility of the calculations within the Tax Justice Network's State of Tax Justice report for 2021 yesterday.

Unfortunately, it is not just the figures that Tax Justice Network is not good at these days. Their logic is also awry. Take this from page 42 of their report, referring to the loss they suggest arises from personal tax abuse using offshore locations: 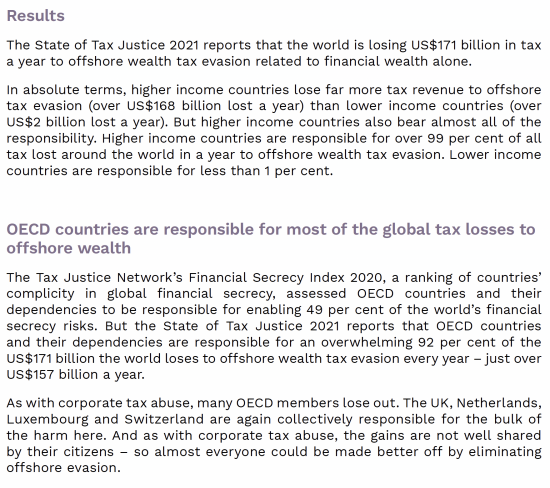 Despite that what the Tax Justice Network is saying is that the OECD cannot be trusted to solve this problem and the task must be handed to the United Nations - which has almost no capacity or experience in this area - so that they can solve the problem for developing countries which the Tax Justice Network suggests is insignificant compared to that in developed countries. They say:

I have to confess that I am really struggling to see what the logic of this is when on the basis of its own data tax abuse of the type they refer to with regard to personal taxation is not a developing country issue, although I suspect that if they used my version of the data they might find better evidence for their claim.

So why are the Tax Justice Network demanding UN involvement in an issue where that appears to make little sense, not least because the UN has not got the capacity to be involved and their own data shows that change in this area cannot be a tax justice priority? And why did they use this rather odd argument to work so hard to undermine the latest OECD tax deal when the actual evidence suggests that the OECD is delivering on this issue*? I genuinely don't know the answer. When their own evidence suggests that they are pursuing an answer to a problem that is insignificant in scale when it comes to developing countries and it is known that the answer that they are proposing cannot solve the problem that they are claiming to address I have to question what they are doing.

I am, of course, willing to give the Tax Justice Network a right of reply.

* And for the record I do know the OECD deal was corporation tax focussed, and was not great for developing countries - but I am referring to personal tax here and they are still proposojg. a UN solution.