Having spent yesterday afternoon reading the government's dismal proposals for new green corporate reporting - where the thinking simply does not add up to a coherent strategy on information flow - I turned my attention to the Net Zero report from HM Treasury to get a feel for what the government is really trying to say about our carbon transition.

The message is as dismal. In summary, it is that the Treasury reluctantly concedes that something needs to be done, but not by them, and that it greatly pains them that they might have to change the tax system as a result of the demise of the carbon taxes that have been such easy revenue raisers for them. Climate change is, very obviously, a great inconvenience in that respect.

Some background data is key here. The Treasury notes how bad the UK is at investing. This is data for the G7: 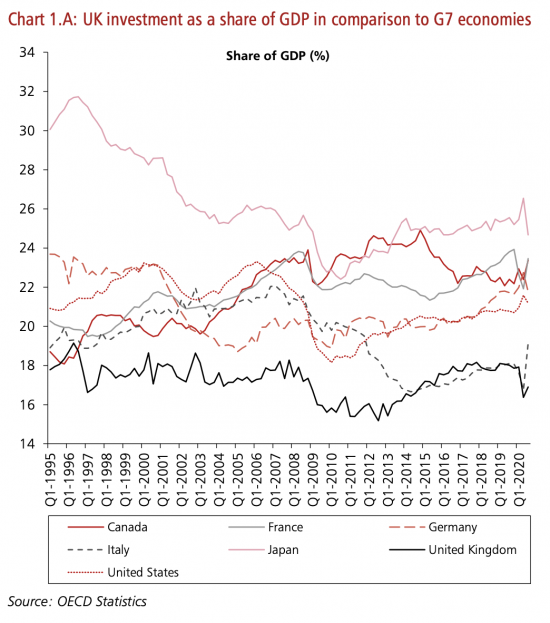 We are simply the worst at investing amongst the world's major economies, and by some way.

Despite this what the report proposes is that we massively increase investment: 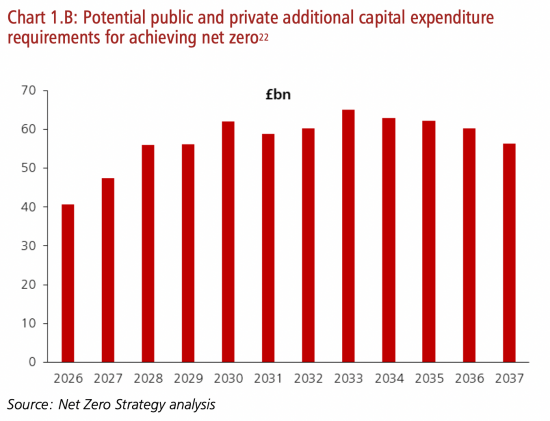 But it then adds the massive caveat that this investment must be made almost entirely by the private sector: 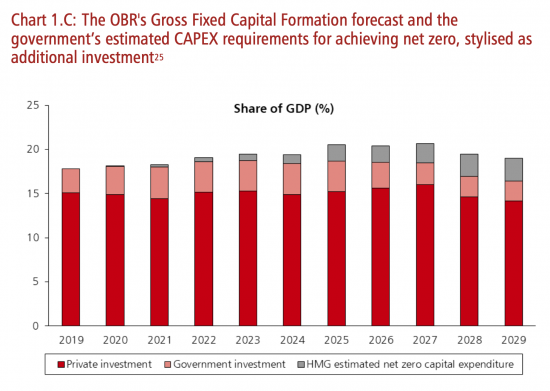 This can be interpreted in a number of ways - but however it is done the message is very clear and is that the government thinks that the investment required to make this country sustainable is someone else's problem. They are not going to do it. Of the £700 billion or so that they say will be required to be invested between 2026 and 2037 it would seem that they plan to contribute little more than 10 to 15%. Call it£100 billion or so.

That is, of course, much less than was spent on Covid, which has been a problem far less urgent for humanity than climate change, although deeply significant, nonetheless.

What is however as worrying is the language used with regard to this investment. For example on page 14 they say:

So, you would think the Treasury should be falling all over itself to fund this activity. But that is not what they say. For example, when referring to Chart 1C noted above they say:

Chart 1.C shows what the scale of this structural rebalancing could look like for the UK economy. Assuming that the net zero investment is additional, but with no multiplier for additional growth, the transition could increase the investment share of GDP by between 1% to 3% this decade.

I added the emphasis. The Treasury assumes that this investment simply adds to economic activity (which suggests that they think there is spare capacity in the economy) and yet has no additional growth multiplier, even though they have already noted the implausibility of that assumption. And as a result, they are not willing to fund it, because in their view growth is what this is all about and they assume there will be none, even though that is absurd.

As I have argued, funding for the investment of the scale required could be found if HM Treasury were to be willing to change savings rules so that the 70% of people in the UK who want to save ethically could do so. The entire sum required could in fact be, I suggest, very easily found in this way. But that type of thinking is not what the Treasury wants to hear, so they bring in Bill Gates to talk about what is, in effect, small change instead.

And let's contextualise this. As the FT has noted, next March it is likely that if the Bank of England decides to reverse its policy on QE and not reinvest the proceeds of redeeming gilt holdings that it then owns then some £28 billion of new gilt borrowing from the private sector will be required simply to reduce the holding on the Bank of England's balance sheet. That is a sum considerably bigger than the government is planning to invest in the green transition right now. It also reduces the sum available within the private sector for this purpose. It's as if they do not realise that you can reverse QE or do the climate transition but not both, or that they do realise this and have decided to reverse QE instead of making us sustainable.

As an indication of the scale of government priorities, you could not get a starker message than this. Balancing the books; keeping monetary policy on track to tackle a problem it cannot solve; and delivering dogma is of higher priority than susta9inaing human life here on earth.

Have no doubt that using a combination of resources - including continuing QE, but in this case green QE - climate change can be defeated. But the message from the Treasury yesterday was that it wants to paint the worst-case scenario for doing so, and not provide the funding necessary whilst suggesting tax must rise when the tax savings on existing tax bases are being ignored.

There is one simple conclusion: HM Treasury is not serious about climate change and its Net-Zero report is the clearest possible indication of that.