The UK government issued a cross-department report on what they call a Roadmap to Sustainable Investing today. As they said:

The report, entitled Greening Finance: A Roadmap to Sustainable Investing, comes ahead of the UK hosting COP26 next month and is part of the Chancellor’s plan for the UK to lead the world in green finance and sustainable investing.

Around 70 per cent of the UK public want their money to go towards making a positive difference to people or planet. But the lack of common definitions around environmental sustainability is leading to greenwashing, misleading investors and consumers about how green a product really is.

The trouble is that greenwash is exactly what this proposal will deliver.

At the core of the proposal for what the government calls Sustainability Disclosure Requirements is a demand that businesses must start disclosing their environmental impact so that other businesses and consumers will have a better understanding of whether their investments are aligned with net-zero, or not. The aim is to 'help cement UK’s status as the best place in the world for green investment'. The proposals will not do that for three reasons.

They simply do not think that the two issues relate to each other. That fails to reflect the reality of the world that we now live in, which suggests that this should be the relationship between the two: 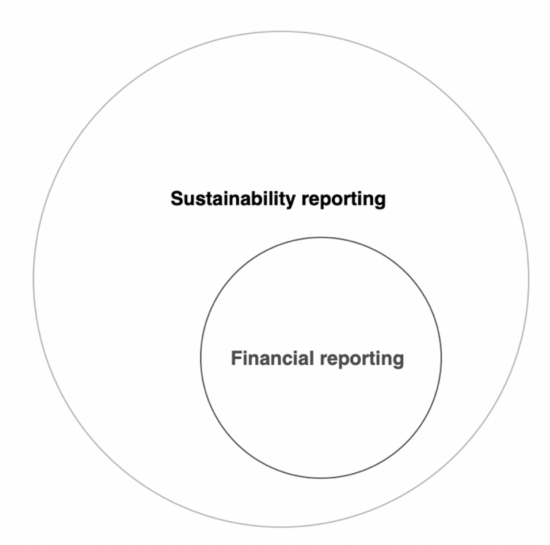 The fact is that if any business is to now be a going concern it has to be able to adapt to net-zero and still pay the bills. That is what my Venn diagram suggests. What the IFRS is suggesting is that paying the bills is still the priority and we can tack some financial reporting on the side. It's as if they still think climate change is an externality that is not much of an issue when it is in fact the biggest issue we all, including business, face.

That the government is making clear that what they expect the ISSB to do is to adopt and so endorse Mark Carney's Task Force on Climate-related Financial Disclosures standards is the second reason for thinking that this proposal is greenwash. What Carney had to say in the TCFD might have looked original in 2017. Now it looks hopelessly out of date. In effect the TCFD requires reporting against eleven indicators: 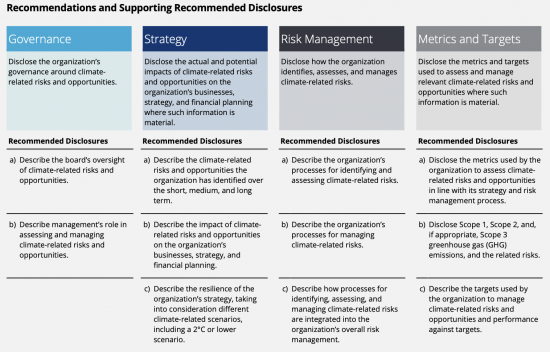 The first three columns all relate to 'soft disclosures' that will be found in the front part of a set of accounts where the management waffle or greenwash might be found. But even when you look at the right-hand column, where the supposed metrics are, you realise that none of these requires that any figure be included in a set of accounts to reflect the impact on the financial position of the company of the supposed climate reporting being made. Just as the ISSB and IFRS assume there is no read-over from climate reporting into financial reporting nor does the TCFD.

Third, the evidence is that despite the existence of the TCFD and some claims of compliance with it the real impact in financial reporting resulting from it has been minimal, at best. Carbon Tracker has done the best work on this. As they noted recently:

Over 70% of some of world’s biggest corporate emitters failed to disclose the effects of climate risk in 2020 financial statements. 80% of their auditors showed no evidence of assessing climate risk when reporting

And this is likely to continue because it seems very apparent that what the ISSB is going to propose is something like the Resilience Report suggested by Sir Donald Brydon in his review of the future of auditing, which is a statement outside the actual financial statements and that may be quite separately audited from it. In other words, the accounts of companies are going to be treated as if the world goes on as normal, whilst over to the side the irritation of climate change will get its own mention in a nice glossy publication, expensively produced with lots of charts and pictures of trees and solar panels, plus the odd electric car, but with absolutely no clue being given as to how this data will then impact on the finances of companies.

In that case, how is the finance sector meant to get any real clue as to how to allocate capital in accordance with green principles which is what the government is saying it wants it to do? The IFRS Foundation say in their conceptual framework that:

The objective of general purpose financial reporting1 is to provide financial information about the reporting entity that is useful to existing and potential investors, lenders and other creditors in making decisions relating to providing resources to the entity. Those decisions involve decisions about:

But what this new framework from the government, IFRS, ISSB and TCFD will do is make sure that no data on green issues will end up in the financial statements prepared using the IFRS's International Accounting Standards. In other words, just at the very time when investors are saying that they need financial data that is material to their investment decision making from all companies that is exactly not what the government is going to offer them. It will be offering greenwash instead.

What do we need? My answer is, of course,  sustainable cost accounting. What this requires is that every company include a provision in their accounts for the cost of eliminating carbon from their systems and that they then indicate how much capital they will need to build the new business model that they must create if they are to survive into the era of sustainability that we must reach. This says exactly what the impact of climate change on companies would be, and how much change will cost so giving investors the clearest possible indication 0f how returns will be impacted by climate change and who will need what additional capital. That is what the IFRS say investors need. That is exactly not what they are going to get under the government's proposals.

For this reason investment companies and pensions funds are going to protest very loudly and very long about what is going to be demanded of them that they cannot deliver because the government is not willing to demand that companies provide the necessary data to do so.

There is going to be a showdown here. And the government is going to have to lose it. Investors of all sorts have to get what they want, and the government will have to give in and demand it from companies. It's just a shame that right now what they are delivering is greenwash and not the real thing. We cannot afford a few wasted years whilst this is resolved. The future of life on this planet is dependent on the government getting this right. And it isn't. It's getting it horribly wrong.