I saw claims published yesterday that national insurance is not regressive. I have to say that I disagree.

Based on the analysis I have done of the additional national insurance that might be due if the rate cap above £50,000 were removed from those with earnings above that sum I have done two charts showing average NIC due by employees in their earnings, each based on data from HMRC for 2018/19 and shown in their data table 3.6, which I think the most comprehensive source of data on this issue.

The first uses all the income bands for which they publish data, which are shown on the X axis: 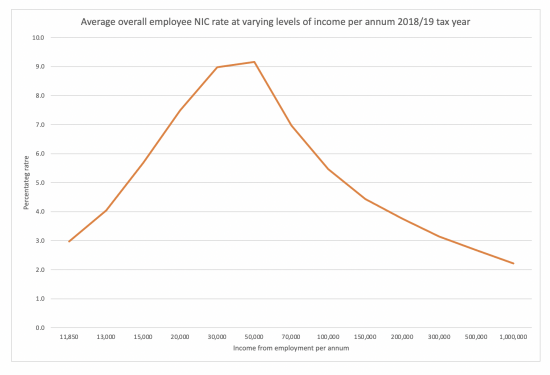 Note the X axis is not spread evenly between data points.

As is apparent employee NIC rates are indeed progressive until the point where the rate cap kicks in. That is inevitable if you have a flat-rate tax and an annual allowance, which broadly speaking (and I say that, wisely) NIC is to that point. Then the average rate falls heavily. Those on more than a million a year pay less NIC as a percentage of income than did those who were just taxpayers and had an income of £11,850 in 2018/19.

I then redrew the data, to average all income above £60,000 to approximate to a top decile of income earners. This produced this data: 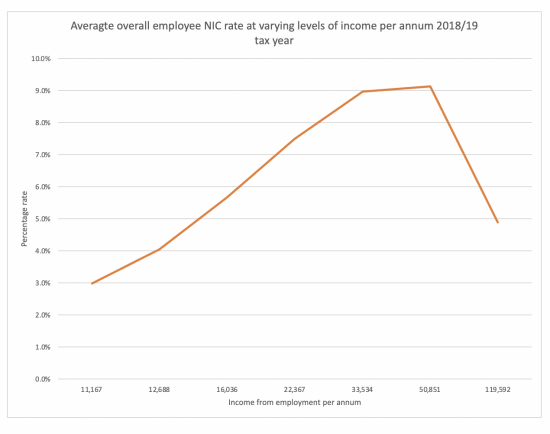 Now the tax looks much more progressive - there's just an aberration at the top, but it's not too bad as the rate still appears to be above that of many lower-paid earners. That though is just the result of playing with the data as it seems some seem to want to do when better data is available that shows just how regressive this tax is.

And I stress, this data reflects only income from earnings. As HMRC says of table 3.6:

If income from interest, rents and dividends was added in NIC would look more regressive.

So, is NIC regressive? On any reasonable logic, yes it is. If you argue that over the majority of data points in the lower chart it is not, then you can come to a different conclusion. But it's one that is wrong because it ignores limitations in the definti0n of the tax base - and that enormously long tail to the right of the top chart which the second chart averages away.

I am entirely satisfied that NIC is regressive.

Apparently, the Institute for Fiscal Studies do not agree, but then they're the only people who think VAT is progressive, which they do by calculating the progressivity of that tax in proportion to spending and not income, so candidly, their opinion counts for little when it comes to such issues.