Charging national insurance at 12% on all employees, including those earning over £50,000 a year, could raise £14 billion of extra tax a year

I have been asked how much additional national insurance might be due in the UK as a whole in each year if all earnings were subject to the current 12% national insurance rate due by employees on all earnings up to £50,284 in the tax year 2021/22, above which sum just 2% is due at present. I have estimated that sum to be at least £14 billion, and in this blog explain the workings.

According to HMRC[1] the following income tax and national insurance has been paid over the last three complete tax years, with the income tax paid by PAYE total being included in the total income tax figure:

The latest year for which reliable tax distribution statistics are available is 2018/19[2]. HMRC statistics table 3.6 for that year shows the following data: 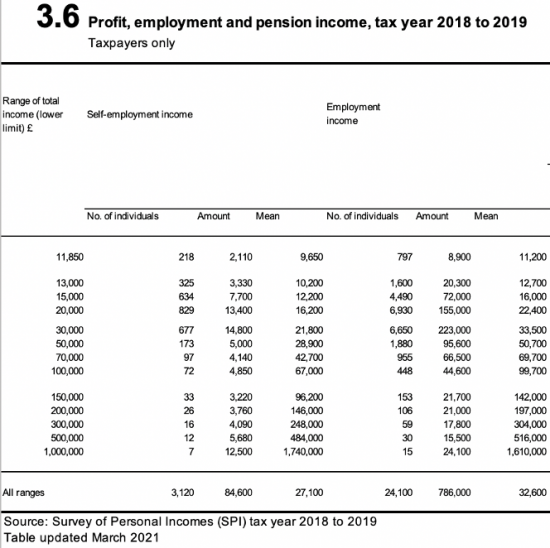 The current analysis applies to employment income alone, with self-employment being largely ignored.

In 2018/19 the approximate annual national insurance exemption (and I have to approximate here because of the way in which NIC works) was £8,424 a year[3]. The threshold at which the rate fell to 2% was £46,384 a year. Using this data the following can be estimated:

A larger version of this image can be found here.

There are approximations in here: I accept that. None is, I think, material. Some paying NIC are not in the calculation, for example; they do not have taxable income. The consequence of multiple employments is ignored. It is assumed income is spread evenly during a year. The income means noted can only be approximations, but have been used to calculate NIC charges for bands and that can only be an approximation. It is assumed that there is no behavioural change, but I am not sure there would be, so do not think that is significant.

Overall, the total estimated NIC due for employees at £55.9 billion would be significantly lower than that due by employers, which would be payable at 13.8% across all income levels. That liability is likely to be close to £80 billion. The two together allow for less than £10 billion of NIC to be paid by the self-employed: this is likely given the lower rates at which they make payment and their average much lower incomes than employees. The overall calculations make sense as a result: the estimate is credible.

As a consequence, some conclusions can be drawn.

The first is that whilst NIC looks to be mildly progressive as a result of the basic income exemption to the threshold at which it stops being charged at 12% it rapidly becomes regressive thereafter and as such can be considered regressive overall, especially when other exceptions from the charge are considered. Anyone claiming otherwise is not properly representing the data.

Second, if the cap on income at which the 12% employee NIC rate was due was removed approximately £14 billion more in NIC could be collected a year.

Third, if you only wanted £10 billion more you could remove the cap for those earning over £100,000 if you charged them at 12% on all their income.

Fourth, if you only wanted £5 billion more you could remove the cap for those earning over £300,000 if you charged them at 12% on all their income.

I stress the numbers are approximate: HM Treasury could clearly finesse them, but within the parameters of published data they provide fair approximations in my opinion.

What the data does show is that the capacity to charge the highest income earners to more national insurance is readily available if sums of up to £10 billion a year are required to pay for additional social care. In addition,  there need be no additional charge on those earning less than £50,000 a year.

Given that the government must know this the question to ask is why are they charging additional NIC right across the income range instead of making the charge a progressive tax, as it should be, across all income ranges, which mp0ve would more than meet their income needs?