Our tax system is as biased as that in the USA, and all with the intention of making the rich richer

US think tank Problublica recently published a report that it said:

demolishes the cornerstone myth of the American tax system: that everyone pays their fair share and the richest Americans pay the most. The IRS records show that the wealthiest can – perfectly legally – pay income taxes that are only a tiny fraction of the hundreds of millions, if not billions, their fortunes grow each year.

Concentrating on just the top 25 wealthiest people in the US (in its estimate) the think tank suggested:

According to Forbes, those 25 people saw their worth rise a collective $401 billion from 2014 to 2018. They paid a total of $13.6 billion in federal income taxes in those five years, the IRS data shows. That’s a staggering sum, but it amounts to a true tax rate of only 3.4%.

As they also noted:

It’s a completely different picture for middle-class Americans, for example, wage earners in their early 40s who have amassed a typical amount of wealth for people their age. From 2014 to 2018, such households saw their net worth expand by about $65,000 after taxes on average, mostly due to the rise in value of their homes. But because the vast bulk of their earnings were salaries, their tax bills were almost as much, nearly $62,000, over that five-year period.

That's a slightly confused way of saying that total income is not just that subject to income taxes: it is (as any good accountant knows) the combined total of income plus gains, because both can at the end of the data be used to pay the bills.

Add these together and they get data like this: 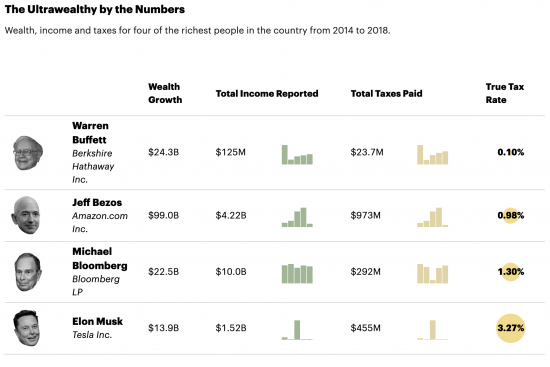 That's pretty shocking, except that a year ago I did a very similar exercise in the UK. I said:

Having appraised data from the Office for National Statistics, HM Treasury and HM Revenue & Customs four main conclusions are reached.

The first is that in the period 2011 — 18 the national income of the UK was £13.1 trillion, and in that same period the increase in net wealth was £5.1 trillion. It is stressed, that this second figure is not for total wealth, but the increase in the value of that net wealth in that period.

Second, the overall effective tax rates on income during this period were unlikely to have averaged more than 29.4%, but those on wealth increases did not exceed 3.4%.

Third, if these rates had been equalised it would, at least in principle, have been possible to raise an additional £174 billion in tax revenue per annum from the owners of wealth.

Fourth, because there has been no attempt at equalisation and because the distribution of the ownership of wealth varies substantially across the UK, which variation is reinforced by factors such as age and gender where substantial inequalities exist, the effective tax rate of the 10% of those in the UK who are in the lowest earning group of taxpayers exceeds 42% of their combined income and wealth gains in a year, but the equivalent effective tax rate for those in the highest ten per cent of UK taxpayers ranked by earnings is less than half that at just over 18 per cent. This is summarised in this chart:

It is, as a result, suggested that there is considerable additional capacity for tax to be raised from those who own most of the wealth in the UK, many of whom are in that top ten per cent of income earners.

The work is summarised in this report.

The injustice will have grown considerably since the spring of 2020 when this work was done. We know Covid savings in households who have benefitted during the last year exceed £200 billion. We know that some companies are much better off: they are sitting on another £100 billion. The total is, of course, the amount injected by quantitative easing into the economy by the government: it ends up in the hands of the wealthiest.

Despite all this largesse from the government there has been no change to our tax system. There is no hint that any is to come. In the UK, as much as in the USA, the bias within the tax system against work and in favour of unearned wealth accumulation is to be maintained.

There are many injustices in the UK. I am under no illusion about that. But this bias to the rich is grotesquely unjust, even in a country where inequality, and all the problems that flow from it, are seemingly celebrated.

Let’s not pretend that the problems that the wealthy create are solely in the USA. They aren’t. Our tax system is as biased as that in the USA, and all with the intention of making the rich richer.