Sunak is claiming he is the grown up in the room. It may be more appropriate to call him the economic sadist in the room.

I referred to the resignation of the government's commissioner for education catch up yesterday.

I suggested that the government really does not care about children. Nor, come to that, does it really have a 'levelling up' agenda. And nor does it have a long term vision, which is what this policy required.

And all that is, I suggest, is for one reason. And that is that the 'Treasury view' of the economy is beginning to take hold in the government. Tom Newton-Dunn, once of The Sun and now of Times Radio (and so close to the government, even if not a journalists I much like) had this to say on Twitter and I think it very revealing: 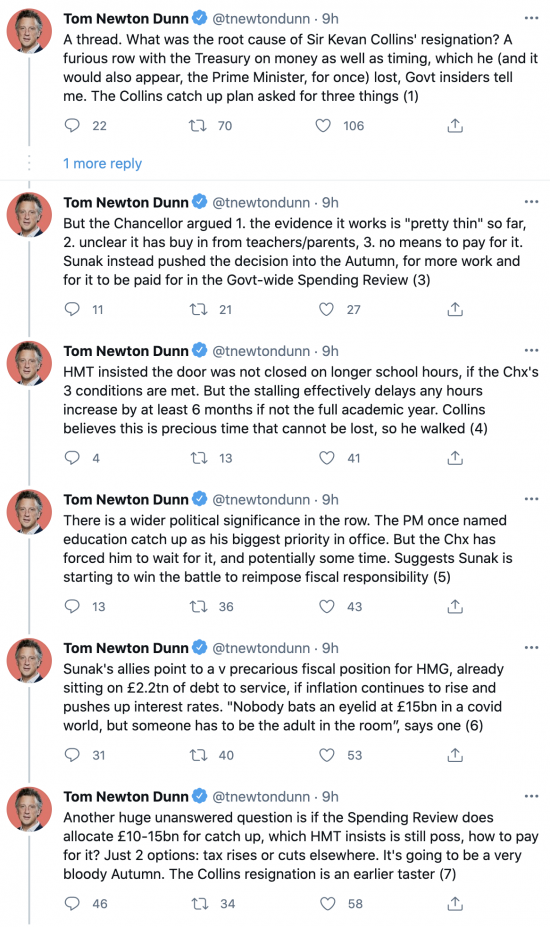 In effect, the message being sent out to him from the Treasury could not be clearer. They think that austerity is now required. The days of spending, come what may, are over. The debt paranoia is coming to the forefront again. And the maxim that government spending must be matched by tax revenue is to be promoted once more. What is more, they believe that the debt is £2.2 trillion. They are still pretending that £800 billion of quantitative easing has not happened.

The result is that come the autumn spending review the government is going to be saying that choices have to be made in the interests of securing a balanced budget. People, it will say, can still have health care, but at cost to education. And greening the economy will come with a price tag of cuts to social care attached. And the reason will be that the cost of servicing - and repaying - government debt must now have precedence.

The claim is that because of the risk of increasing interest rates there will be a need to cut borrowing. The trade-off, it will be claimed is direct. And that, we know is wrong.

As I showed yesterday, in real terms the government borrowed less than £20bn last year. That is staggeringly low when total spend was more than £1.1 trillion.

And regarding QE funding, this cancels the interest charge on the government debt that the government repurchases. So 40% of the claimed cost is simply returned to the Treasury, straight away.

What is more, there is literally no requirement at all for any interest to be paid on the balances the UK's banks hold with the government as a result. I will blog on this last point again, later today.

And with regard to the remaining gilt interest costs, our borrowing is fixed rate and on average for 14 years: there will be almost no impact on government interest costs if rates do rise as a result.

And interest rates are, in any case, entirely under the government's control,. The pretence that the Bank of England sets them is just a charade: they have to do what the Treasury wants at the end of the day or the Chancellor has the power to overrule them.

Sunak wants to claim he is the grown-up in the room. It may be more appropriate to call him the economic sadist in the room, because that is what this is going to look like. It will look as if the Tories are going to punish people for Covid. And that is unforgivable.

If you want to know more about why, I suggest 'Money for nothing and my Tweets for free', which is my new ebook. 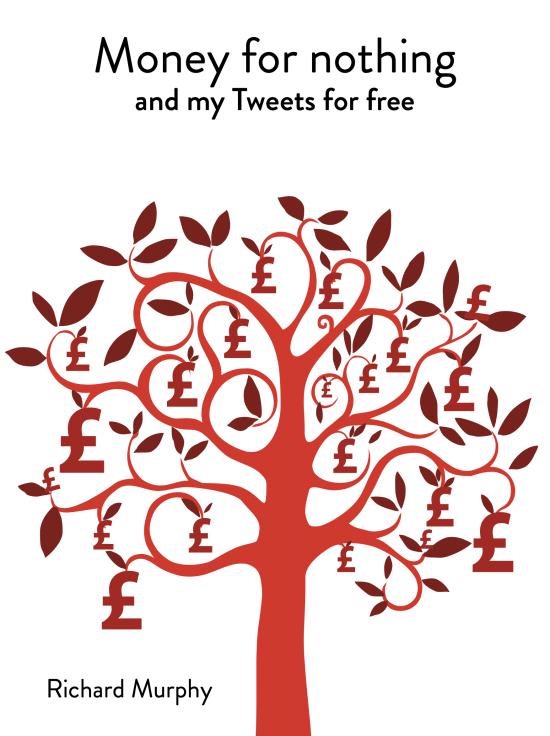 The book can be downloaded, free, from here.