The government really does not care about children

As the TES has reported:

The education recovery commissioner, Sir Kevan Collins has written to the prime minister Boris Johnson to offer his resignation this afternoon.

Sir Kevan was unveiled by Boris Johnson as the government's catch-up tsar just five months ago, tasked with overseeing the creation of a plan that would ensure pupils could recover after two periods of school closures during the coronavirus pandemic.

It was revealed this week that he had asked the government to fund a £15bn catch-up fund, but today the Department for Education came up with just £1.4bn.

Amazing,  a person of principle in an age when that is so rare. And principled for all the right reasons. This was his letter of resignation: 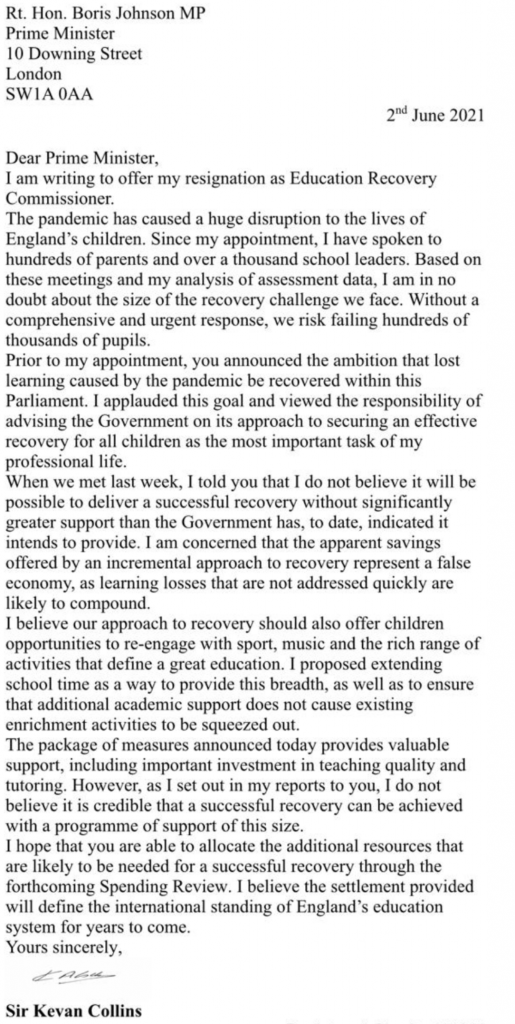 We now know three things about this government's attitude to children, based on what they have done today.

The first is that they do not count when issuing data on population and the achievement of vaccine immunity: only adults apparently count for this, which is ludicrous.

Second, they have no intention of vaccinating them, leaving them at massive risk of long Covid (and yes, they get it).

And third, they are not worth investing in, as this evidence shows. I estimate the proposed investment per child at under £100, others make it around £60.  The requirement was ten times that.

This is callous indifference. And if parents don't begin to notice they clearly don't care either.