The argument on GERS has been won: Scotland knows it is crap

I was amused to see an article in The Spectator by Kevin Hague, with whom I have crossed swords many a time on the subject of Government Expenditure and Revenue Scotland.

As some readers will know, I am not much of a fan of the intellectually and methodologically flawed GERS statement. This records government income in Scotland but expenditure for Scotland, without credit for tax paid on the latter in England or elsewhere being given. It is, therefore, designed to overstate the Scottish government's deficit, and does. That is exacerbated because there is no way of knowing whether tax is appropriately credited on imports and exports of goods and services and it is very likely that significant parts of Scottish financial services profits in particular (rents internet, fees, etc) are recorded in England without tax being credited to Scotland as a result.

Kevin Hague argues GERS is factually accurate though, which only proves who little he knows about any form of accounting or statistics.

Amusingly, a survey for The Spectator shows most people do not agree with him. They found this: 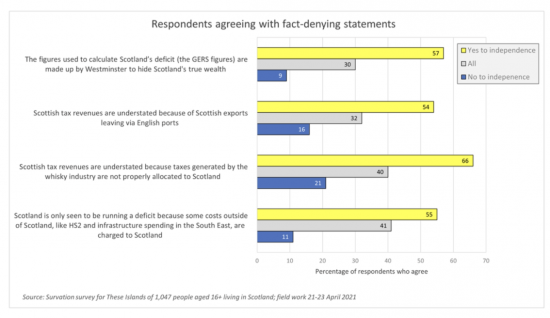 I think we can safely conclude that the argument on GERS has been won: it is what I have always described it as, which is CRAp, or a completely rubbish approximation to the truth.