Mythbuster: We have to repay the national debt

We have to repay the national debt.

We never have! It's been rising almost constantly since it began. Why should we start repaying it now?

You do know that the national debt includes all our notes and coins? Why do you want to get rid of them?

£167 billion of National Savings & Investments accounts is included in national debt. Do you want to close NS&I? If so, why?

You do know that the national debt is just banks, pension funds, life assurance companies, companies and even some individuals just saving in the safest place that they can? Why do you want to take those safe savings accounts away from people?

You do know that the interest rate on the national debt is negative right now? People are paying the government to take their money? Why would you want to stop that?

Since 1946 the UK government has increased what is called the UK national debt by £1,782 billion.

In that same 74 year period the UK government repaid just £38 billion of the national debt.

As a matter of fact we have repaid almost none of our national debt over the last 74 years. So why does anyone think we should start doing so now?

And there are £71 billion of bank notes in circulation and a bit less than £5 billion in coins. These are all part of the national debt - the notes even have the fact printed on them. Why do we want to get rid of all these, which we would if we repaid the national debt?

National Savings and Investments - including Premium Bonds - is also part of the national debt. Why do you want to close that? £167 billion was held in their accounts by 25 million customers according to their last accounts.

And gilts are really just another sort of term deposit savings account used by pension funds, Life assurance companies, banks, companies and even some people. Why do you want to close these ultra-safe accounts and make pensions and savings more vulnerable?

The evidence that there has been any effort to repay national debt is very hard to find: 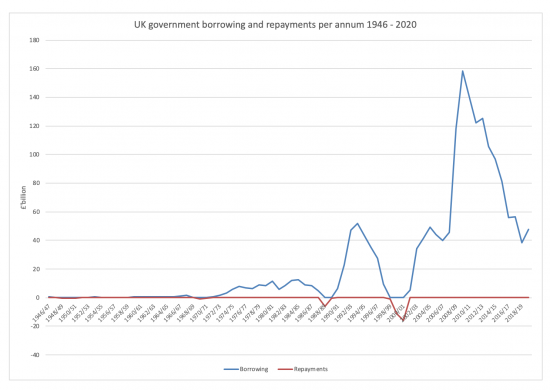 As is apparent, borrowing is normal and repayment is rare, and in much smaller amount.

And as for who owns the debt, The House of Commons Library suggests it was as follows in late 2018. The proportion of bond debt owned by the government will now have gone up as it has bought another £200 billion of its own debt as the coronavirus crisis has developed: 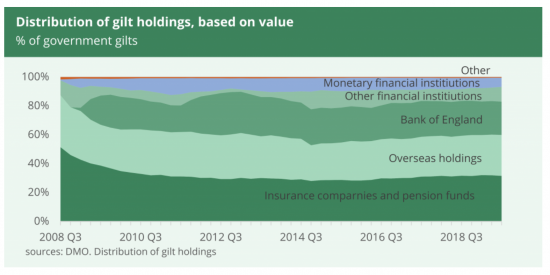 What this makes clear is that around a quarter of the debt (the part-owned by the government )has no interest paid on it and of the rest, two thirds is in the UK.

The only reasonable conclusion is that there is no reason at all to think that the national debt need be repaid based on the evidence of the period since World War II. In that case to suggest that it should be now makes no sense at all. The debt will remain outstanding, as has that from all previous periods.

There are more Mythbusters here.