The way to tackle the ‘how are you going to repay the borrowing?’ question

One of the perennial questions surrounding what is supposedly called government debt is the 'how are you going to repay the borrowing?' question. The media is obsessed with it at the moment.

They appear wholly unaware that we have never made any serious attempt to repay this supposed debt: 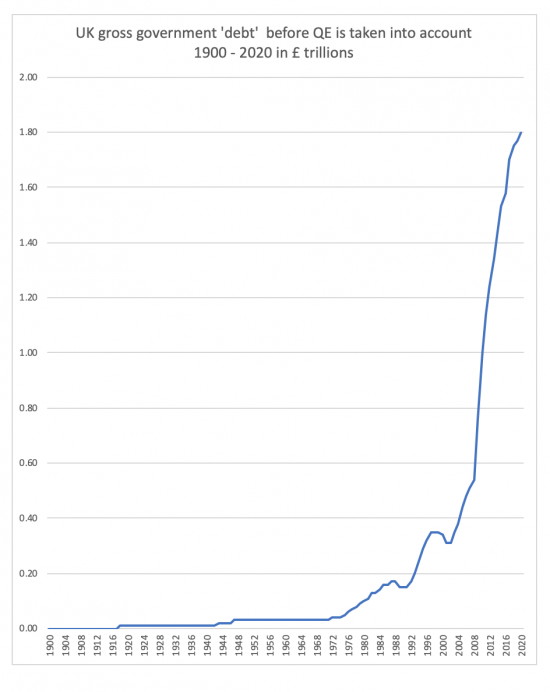 It has not mattered that we have not repaid debt to date. There is good reason for that: people want to own UK government debt: it's a great asset to have right now (and pretty much anytime else in history too: read the novels of Jane Austen to appreciate that).

But the question persists. I heard an interview of a UCL economists by Adrian Chiles on Friday: it was chronically painful because much of the economics that was discussed used ancient historical perceptions of banking (banks are still intermediaries, apparently) but also because of the inability to answer the question 'how are we going to repay this?'

I faced the same problem on BBC Radio Scotland with John Beattie last week, and he was clearly baffled by my response when I said we did not need to do so.

I explained that people are very happy to hold zero interest rate government perpetual bonds. As I told him, he only needed a £20 note in his pocket to see one (and yes, that's true, even in Scotland as all Scottish notes are backed pound for pound with Bank of England deposits). In other words, people are already completely happy to hold part fo the national 'debt' on which there is no repayment date.

But Beattie insisted to me that all debt has to be repaid or people won't 'invest' in it.  I should, of course, have also asked him why in that case he thought people bought shares, because they are not repaid. The reason is simple: they do so because there is a market in them and the same is true for government bonds as well. They do not need to be repaid because they can be sold.

However, the real answer to this question comes in the form of perpetual bonds. I have already discussed these. Will Hutton also did so, when picking up on a number of themes previously discussed herein the Observer yesterday, saying:

The government has to start funding its deficit with “perpetual” bonds, never to be repaid but which carry a higher interest rate, so recognising the abnormality of its plight.

He is right. But I would add that the higher interest rate need only be marginal. And in any case, the best reason for these bonds, as I previously noted, is that they are perfect for being subject to quantitative easing as the issue of rolling them over then never arises, and the interest rate is irrelevant as interest is not paid on QE debt since it would only be the government paying itself, and that is pointless.

Issue such debt then and the question of 'how are you going to repay the debt?' simply goes away.

The time for perpeptual bonds has arrived.