Tax After Coronavirus (TACs) : The history of capital taxation in the UK

I have argued as part of the Tax After Coronavirus (TACs) series on wealth taxation that there is considerable extra scope for the taxation of wealth in the UK. The overall rates of tax paid by UK income earners, ranked by decile, taking both their income and the taxes paid on or out of income and their average increase in wealth from 2011 to 2018 and the taxes paid on or out of that wealth into account produces a comparison of effective tax rates on the combined increase in the financial well being of these groups that looks like this:

As is apparent, income is taxed much more heavily than wealth.

There is further evidence to support this trend in a House of Commons Library report that included the following chart: 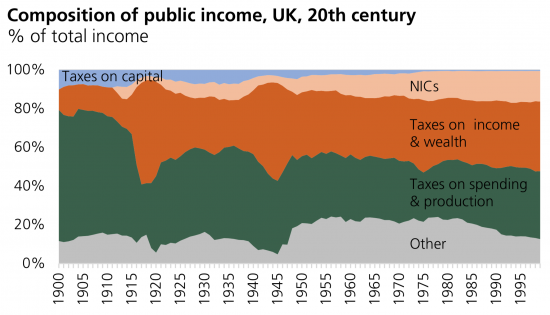 Taxes on capital effectively disappeared during the twentieth century.

Taxes on labour replaced them.

But there is nothing to stop us bringing them back, and the rebalancing necessary in our society that requires that wealth inequality be tackled now necessitates doing so.