I spent some time yesterday talking to a journalist who was asking about suggestions that the UK national debt should be paid off using a one-off wealth tax. Ed Conway of Sky News is one of those proposing such a charge, but he is far from alone. Because the journalist in question had seen my work on wealth tax as part of the Tax After Coronavirus project, and had noted my suggestion that wealth is undertaxed compared to income by up to £174 billion a year, he presumed I might agree with the suggestion.

I don’t. It makes absolutely no sense at all.

First of all, we need a national debt. I stress, we don’t just have one as a matter of fact: we actually need one.

That’s partly because the national debt is, in effect, a major part of our money supply. One completely accurate way of viewing it is as that part of government spending that has yet to be recovered by tax paid. It is then the money that the government has injected into the economy. And some of that really does look like the most conventional form of money that most people recognise as such: our notes and coin are part of the national debt. Quite literally, the money supply that we need to make the economy function would not exist in the reliable and controlled (i.e. largely at low interest rates and inflation free) form that it does if we did not have the national debt that permits government de facto control of money markets. The national debt delivers stability then, rather than undermine it. Getting rid of it would, then, be a very bad idea.

Second, I pointed out that quantitative easing means that national debt does not have to rise now, and with new QE of £200 billion already happening this year the rise in the real national debt, which is that after QE is offset, may be no more than double the £55bn Rishi Sunak forecast for this year, and not so exceptional after all.

Third, as I also pointed out, at the slightest hint of markets not wishing to buy debt the Bank of England will intervene again by creating more QE to ensure that the market is stabilised: the risk that national debt net of QE is going to rise at anything like the levels being talked about in the press, fuelled by the irresponsibility of those agencies (like the Office for Budget Responsibility and the Bank of England) who insist on talking about gross national debt when net national debt (i.e. with QE offset because the government owing itself is not an issue of concern to anyone) is the only figure of real consequence, is very low indeed.

Then, fourthly, I came to the issue of this tax.

The latest figures for UK national wealth are as follows. They come from the Office for National Statistics and relate to 2018: there is nothing more recent than that. 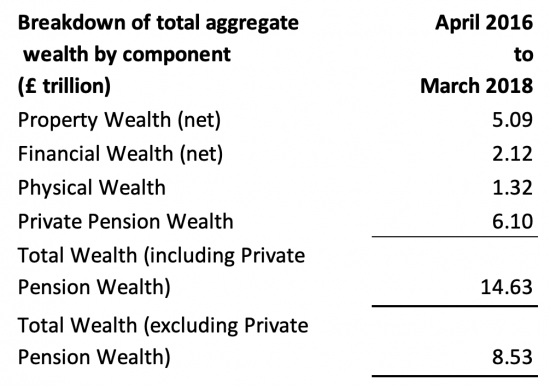 As the data shows our national wealth is big. It is likely to be more than six times our national income. And because I rather strongly suspect that some of the wealth of some of the wealthiest people was not found by the ONS when undertaking this work, because some will still be located offshore, it may be a bit higher still than the figures noted.

But given the spread of the wealth giving this wealth a ‘haircut’ in the form of a one-off tax charge is not going to be that easy.

Most, but not all (admittedly), of the property is family homes. The only way a wealth tax can be charged on many of these would be by requiring people to take out mortgages to pay that tax. That’s not going to happen: there is not a hope that any political party will do that.

Nor is any political party going to raid people’s pension savings. That’s simply not politically possible.

In that case the two biggest pots of wealth, by far, are already beyond reach.

And about one-third of financial assets are in ISAs: again, I suggest that no politician is going to impose a tax on them.

Whilst most physical wealth is the stuff that we own in our homes, plus cars and similar property. I’m not quite sure how that’s going to be taxed without, again, forcing people to take out loans to make payment.

So we’re left with a part of the financial asset pot potentially available to tax. This could be achieved, so long as the crash in the stock market that would happen when very large numbers of people were simultaneously forced to sell their shares to pay tax on holding them could be tolerated, because that sale would have to happen, and precisely because everyone would be selling share prices would fall heavily. The move would, then, be counter-productive because stock market crashes rarely help economic recovery, and government debt might even actually rise as a result if another recession was triggered.

Which brings me to my key point, which is that since little of this wealth is held in cash and the banking sector would have no desire to create loans to help people pay a one-off wealth tax the reality is that the cash required to settle a wealth tax is unlikely to exist, unless government were to create it to let the tax be paid - which is pretty counterproductive. A tax of this sort simply cannot work in that case, at least without trashing the economy in the process.

So, not only is the tax not needed, because we need the national debt and it’s not as big as people keep saying it is, but it is also technically nigh on impossible to levy such a tax without creating economic havoc, which would wholly negate its purpose.

It is not then by chance that I have chosen to focus my work on the taxation of wealth on taxing the income from wealth appropriately when that income is clearly very heavily undertaxed at present.

And it is not by chance that I am also suggesting that in exchange for coronavirus bailouts the government should be taking stakes in the businesses it supports - to be used to establish what I have called a National Wealth Service.

Those stakes in businesses - which could be significant - and which provide asset backing for the loans provided by the government to business, which is a wholly fair exchange - could grow in value even if many of the businesses now saved will fail in time. That is always the way these things work: the whole of private equity investing is about some high gains offsetting many smaller losses.

But this is not taxation: this is the government saying to business that support is not unconditional. There is a price for not having enough capital to weather a crisis, and that price is foregoing part of ownership. I would give business the option of buying those shares back, at a premium which would increase over time. But acting in this way is not unfair. Nor could any business object: it would just have to find funds from elsewhere if it did not like this deal. There is no compulsion to take government money. But we would not then be bailing out business: we would instead be creating an asset fund that this country has long been missing.

This is the real way to deal with the current situation. It’s creative, appropriate and meets a need. That is everything that a one-off wealth tax is not.

Which is not to say that I am opposed to wealth taxes: we may well need one, at some time. But not as a crisis measure, but at nothing like the rates and required to pay off the national debt in a go, which is an absurd idea in itself.