Is the UK accounting profession indifferent to non-financial reporting?

I have already noted the new paper I, with my colleagues Atul Shah and Petr Jansky, have had published in the Nordic Tax Journal. I have as a result noted my concern with the quality of the data that European banks publish on a country-by-country reporting basis.

To summarise the concern, this is how the data in the consolidated accounts and country-by-country reports produced for CRD IV purposes by UK banks compare: 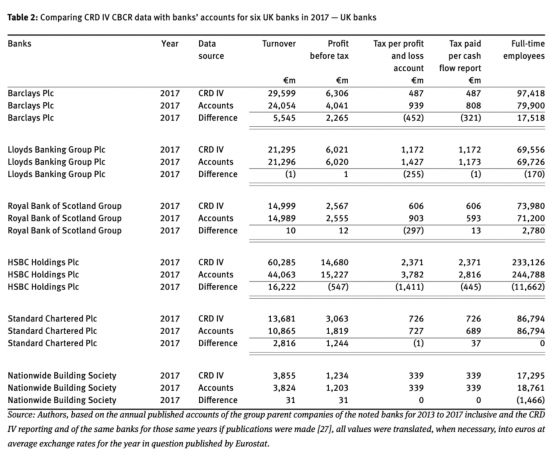 There are a couple of things to note. First, since the banks only produce one tax paid figure that in the third and fourth columns is the same in each case. As is apparent, the figure is closer in most cases to cash paid tax, as UK but most European regulation requires, but with the notable exception of Nationwide and Lloyds on cash paid there us little agreement.

And this is the recurring theme. How only one can get the number of employees consistently stated is, for example, baffling.

What is apparent is that Lloyds, RBS and Nationwide prepare their country-by-country reporting data on a 'top down' basis i.e. they allocate the figures in the group accounts to country whilst the others report the local accounts and as a result can produce substantial differences as a consequence of double counting if intra-group transactions.

Neither view is wrong, per se. But they are not the same. And what is apparent from this comparison is that some of the essential qualities of accounting data (consistency, comparability and comprehensibility, as well as relevance and reliability) are being lost here. And the question has to be asked as to why that is.

It seems to me that is because a) the UK government does not care and b) nor does the UK accounting profession and c) accounting standards declare this issue to be beyond their remit and so they claim to have no interest either. All suggest that this 'non-financial reporting' (which is actually financial reporting, even if they would like to claim otherwise) is outside the scope of mainstream accounting and so not an issue to trouble them.

I beg to differ. This is accounting to society. That is why the EU required it. And what the government, but having no regulator for this disclosure, and the profession in its various forms shows is contempt for society in not seeking to9 establish enforceable standards for this disclosure. I suspect that this will be another issue for the Corporate Accountability Network to address: indeed the idea for the Corporate Accountability Network came, in part, out of this work.

Incidentally, UK banks were not alone in presenting inconsistent data. Nordic banks do as well: 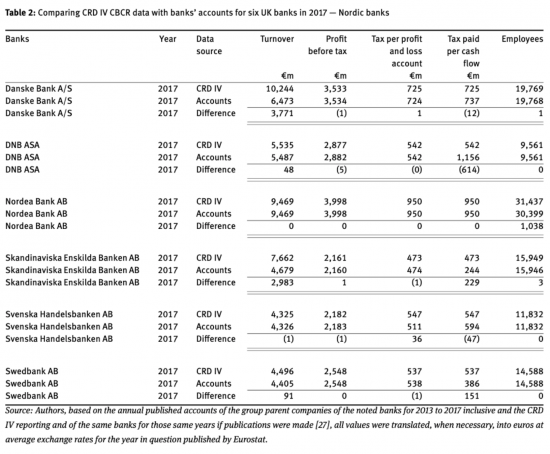 However, at least Nordic banks could get their number of employees right and even when some reported turnover on a top-down basis the rest is remarkably consistent. In other words, performance significantly better than that of the UK banks is possible.

So what is missing in the UK? Willing? Ability? A profession willing to get a grip of the situation? Or a competent government? It may be all four. But it's not to our credit. And throughout the sample the need for accounting standards was readily apparent.

If this quality of so-called non-financial reporting is acceptable the profession really does have a great deal to do to ensure it remains relevant as this data becomes more significant. It's a long way from setting any acceptable standard at present.