The markets are already out of love with Johnson

The pound / euro exchange rate movement over the last few days shows that something I anticipated has happened rather sooner than I expected: 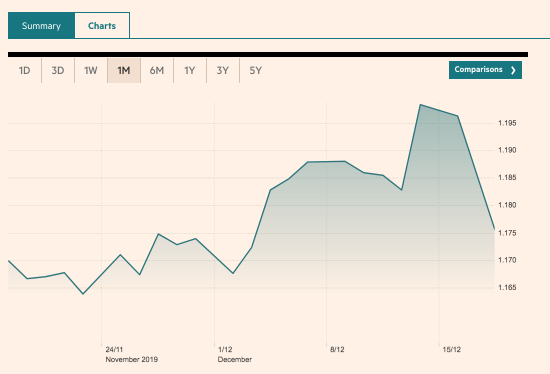 Buyer’s remorse is already apparent. The phenomenon is, of course, well known. You get  your purchase home and realise it does not quite live up to what it said on the tin.

The City is already realising that Johnson is incompetent. Only an incompetent negotiator shackles their scope for manoeuvre in advance when seeking a deal, but that is exactly what Johnson has done with his intention to legally exclude a Brexit negotiation extension, come what may. The City has already appreciated how crass this is. They’re now over their euphoria at waving goodbye to Corbyn. The dark reality of Johnson is dawning.

They are but the first to appreciate this.  They may have got there a little quicker than most, but the awareness that Johnson is not going to offer a land of milk and honey will dawn in a great many people quite soon.

Democracy does not come with the option of seeking a refund. Buyer’s remorse is real. Sometime people will realise that.

Corbyn was bad. We know that.

Awareness that Johnson might be at least as bad, albeit for different reasons, is going to grow.

The next five years are  going to be interesting, for a great many unfortunate reasons.