Funding the Green New Deal: How we could Save for the Planet

Colin Hines and I have a new report out this morning on funding the Green New Deal: 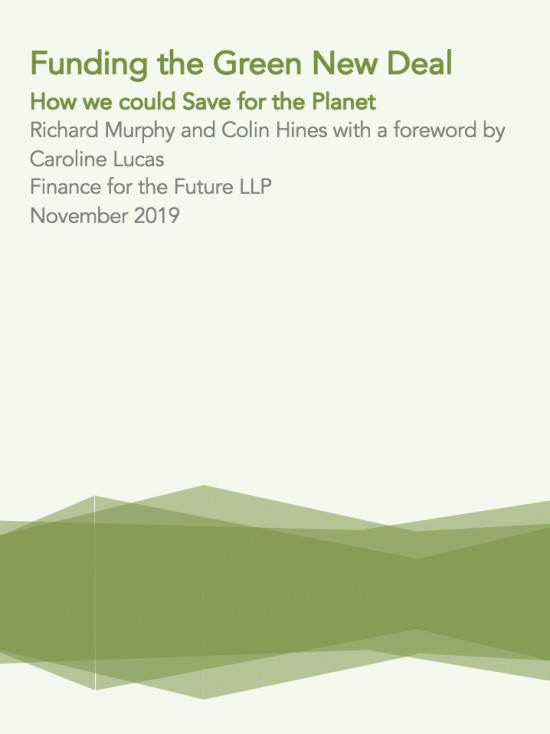 As is apparent from the cover, the foreword has been written by Caroline Lucas, who hopes to once again be MP for Brighton Pavillion next week.

The report answers a question that no one else has tackled, which is who might buy the £100 billion of bonds that might need to be issued each year to fund the Green New Deal. Unless that question can be answered the Green New Deal can't happen. We think we have the answer.

The press release on the report says:

How we could Save for the Planet

In a new report entitled 'Funding the Green New Deal: How we could Save for the Planet', Richard Murphy and Colin Hines, who are both members of the Group that wrote the first Green New Deal report in 2008, seek to answer that question. As they show, over 80% of UK financial wealth is held in tax incentivised accounts, whether they be pensions or ISAs. As a result it is to these sources that they look for the funding. What they suggest is that by simple changes to the tax reliefs applicable on both types of account up to £100 billion of funds can be directed towards the Green New Deal each year. This is as much funding as anyone suggests might be needed at present.

The changes are simple. With regard to ISAs it is suggested that the government should back the issue of Green New Deal bonds paying interest at an average rate of 1.85%, which is the average UK government cost of borrowing at present, and it is only these that should be available to ISA savers in the future. This could raise up to £70 billion a year in funds.

Taken together the measures would ensure that tax reliefs are aligned to society's need for a Green New Deal.

Caroline Lucas, who has been the Green Party MP for Brighton Pavilion since 2010 and who is standing again in the current election, has written a foreword to the report. In it she says:

"As Murphy and Hines remind us, people investing in pensions and savings will largely be from older generations who can thus play a vital part in the Green New Deal. They can save for their own benefit and at the same time benefit all of us, and in particular, younger generations. This inter-generational rebalancing could be another key element of the Green New Deal, and merits further investigation. Working together, we can create a better future. For all of us, and for the planet we share."

The report is available here.