Reaction to the letter Caroline Lucas, Andrew Simms, Colin Hines (whose name was omitted in error) and I had in the FT yesterday was intriguing, and largely predictable. This being election season those seeking to dismiss a straightforward, easy to comprehend and, for savers, deeply rewarding mechanism for reallocating savings towards funding the Green New Deal were out in force.

What the comments revealed were three things. First, a fair degree of trolling, which I am getting a lot of at present, and which is not worth further comment. The second is a high degree of self-interest, most especially around the withdrawal of tax relief for new ISA contributions of existing style. And third, there is some real confusion about savings. The last is what I am interested in here.

First, some facts. The latest data on UK financial wealth is as follows, and dates from 2016:

Of net financial wealth £600 billion is in ISA arrangements. This means that in total 46.7% of total wealth and 85.3% of all financial wealth, including pensions, is saved in tax incentivised accounts (pensions and ISAs) in the UK. On the basis of this analysis, we think any ISA will have substantial appeal: tax relief is key to investment decision making for most people it seems.

Second, since writing the letter early in the week I have refined my view of a potential interest rate (I stress, my view alone). I suggest 1.85% because the U.K. government Debt Management Office suggests that is the current nominal average net cost of U.K. government debt, and it will attract very large quantities of funds to this ISA in my opinion.

Third, some more facts on people who save using U.K. government debt. According to FullFact, gross UK government debt of about £1.8 trillion is held as follows: 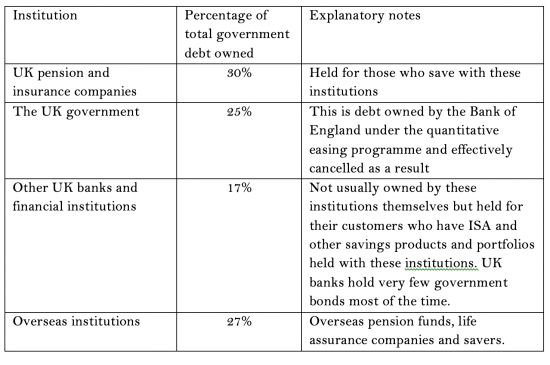 The claim them that people do not trust the government with their savings is not justified in that case. This evidence clearly shows that they do.

And fourth, for those in doubt I suggest that the government can offer a value guarantee on these ISAs. This can be done in a number of ways. Firstly, bonds can be fixed for a varying number of short term periods: shorter periods would necessarily carry lower rates, I suggest. Everyone is used to this in the existing savings market. Even so, secondly, the government could also guarantee but back for any bond at par: the price would be heavy in terms of interest foregone, but it would be effective. Again, the savings market is completely used to this right now. And thirdly on this issue, the government could guarantee these bonds. For those who understand modern monetary theory there will be an awareness that this guarantee is costless. For those who don’t, equate this guarantee to the fact that at present the UK has what’s called a Financial Services Compensation Scheme. This means that anyone who has up to £85,000 in a bank deposit account is guaranteed to be repaid by the government if that bank fails. This provides a government backstop guarantee for all UK savings. I suggest that the Green New Deal should involve a similar guarantee meaning single Green New Deal approved bond or deposit or loan should be backed up by the government to at least the same limit as that used the Financial Services Compensation Scheme.

So, a Green New Deal ISA will have a guarantee, a competitive interest rate that costs the government no more than other funds, tax relief and flexibility. Those who claim that despite that Green New Deal ISAs will not apparently appeal even though tax incentives are shown to dominate saver decision making and there are already substantial savings deposited with the government have, I think, simply got their analysis wrong. My big fear is that if anything this product may generate too much cash for the government. I won’t get overly worried about that as yet.