It was largely by accident that I became a commentator on the Scottish government's Government Expenditure and Revenue Scotland (GERS) statement about 18 months ago. I dislike poor accounting, and GERS is very poor accounting because it fails to use the same basis for accounting for revenue and expenditure, which builds in an automatic, and I think significant, bias to overstate the Scottish government deficit. And the statement does not also accurately reflect anything that might remotely represent the true consequences of decision making that might happen if Scotland was to be independent. It admits this in the small print. Most forget it when coming to comment. A detailed critique is here: I won't repeat it.

This morning the Scottish government has published the latest GERS data, for the year to 31 March 2018. Three things stand out.

The first is that the method for calculation has not changed. It is still as flawed as ever.

The result is that, secondly, it is still claimed that Scotland is doing terribly compared to the rest of the UK: 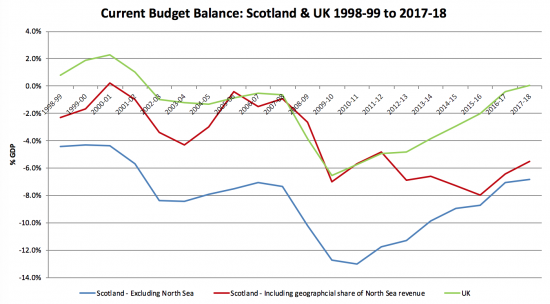 According to the data Scotland is now doing very slightly better than the whole of the UK at the time of the 2008 financial crisis. That, however, is nonsense.  If the data was produced correctly what it would show is that Scotland is doing better than most parts of the UK but is doing vastly worse, as is everywhere else, than the south-east of England, including  London. The divide is not between Scotland and the rest of the UK, as all the GERS charts imply,  but is instead between the south-east of England and the rest of the UK.

And this matters. UK  economic policy is a run for the benefit of the south-east of England;  its taxes are structured to appease them;  much of government expenditure is there because it includes the capital;  and expenditure decided upon to  suit the voter in the south-east of England is apportioned to Scotland as if it was policy to benefit that country, which quite often it is not. In that case all these comparisons are simply wrong, and it is time the Scottish government said so. Part of good accounting is choosing good comparables with which to contrast reported data: the GERS team is letting Scotland down by not choosing to make the appropriate choices in this area.

Third, there is the issue of data quality to consider.  I have in the past suggested that GERS is CRAP. CRAP  in the way that I use it here as a technical term: it stands for 'completely rubbish approximations'. And table B.2,  published this morning,  confirms this to be true. Look at the table of comparisons for revisions to Scottish and UK data and you will see that, as always happens,  there are some revisions to UK data but the revisions to Scottish data are very much bigger in proportion, and the largest overall UK provision actually relates to a Scottish tax. In other words, GERS really is CRAP. 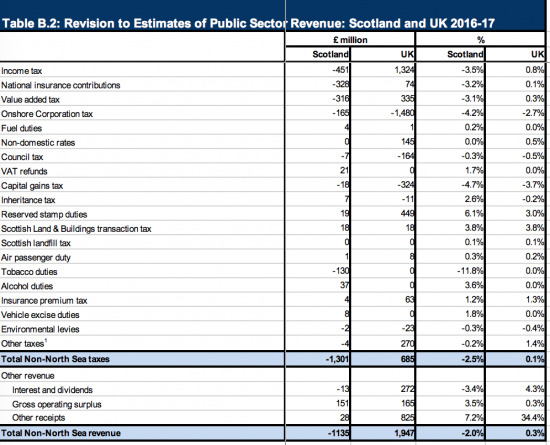 It is time the Scottish government invested in better national income accounting for the country, which I contend is possible. GERS is not a basis for forecasting Scotland's future, and one of the weaknesses of the Growth Commission is that it presumes that it is when that is a wholly inappropriate assumption to make. There is a duty to identify what really happens in Scotland so that there can be informed debate on the country's future. GERS does not do that. It's time to have the right data, and GERS is not it.