Why is the ACCA employing someone as Head of Audit and Assurance who has just been fined for professional misconduct by the ICAEW?

On 6 December this year the Investigations Committee of the Institute of Chartered Accountants in England and Wales published the following statement: 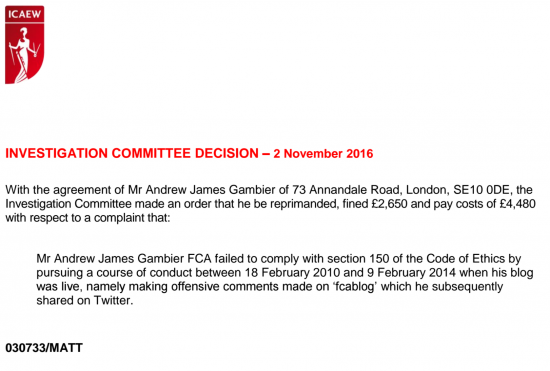 Why share this? There are a number of good reasons.

First, the consent order does not reveal what was really going on here, or the appropriate dates. The FCAblog was run by Andrew Gambier until 3 September 2015. Its demise was noted in a blog I posted on that day. The ICAEW did not get their facts right.

Second, the blog was not just offensive, it was crude and deeply personal. I was one of its principle targets. This was apparent even in comments on the farewell posting.  Tim Bush at Pensions and Investment Research Consultants (PIRC) was another. I won't reproduce the types of language used: I would not tolerate it near this blog.

Third, more importantly, this blog appeared to have a particular gripe against those not following the line of accounting orthodoxy, which both Tim and I have questioned. It did so from an indisputably knowledgeable viewpoint. The way it did it was profoundly inappropriate.

Fourth, what the ICAEW announcement did not make clear was that Andrew Gambier was throughout the period during which the offences took place the ICAEW Technical Strategy Manager; effectively its number two in its technical department. In fact, because many if the blog's were posted during the working say I find it impossible to believe that the ICAEW paid for many of them.

Fifth, I find it nigh on impossible to believe that some in the ICAEW could have been unaware of this, although I know Michael Izza, its chief executive, did not. Presuming he did I informed him of my awareness of Gambier's authorship of the FCAblog in mid September 2015 and his reaction was clearly of genuine shock. Gambier's employment ended a few days later: I have no idea of the circumstances. I did not ask. I did not want to know. I made no complaint. I was unaware that a professional disciplinary action was taking place until told in the last few days. I have no issue with Andrew Gambier personally and professionally he has been sanctioned.

But I do have a remaining issue of concern. Gambier went from the ICAEW in September 2015 and by November 2015 was appointed Head of Audit and Assurance at another UK accounting institute, the Association of Chartered Certified Accountants. This is a fully authorised UK accounting body, self regulating its members in this area of work.

I said nothing at the time of Gambier's appointment as he had not been found guilty of professional misconduct at the time, but I will now. I think it impossible for a UK professional body of accountants to employ a person as Head of Audit and Assurance who has been disciplined by another such body for serious professional misconduct of the type I have noted (which he admitted in this closing comment on his blog was only possible from behind a veil of secrecy that he had carefully created to prevent his employers knowing if his actions over a number of years) and still retain a shred of credibility on this issue.

For the avoidance of doubt let me make it clear why I say that. To be credible a professional body must be fair, open, reasonable, transparent and accountable. By implication it must avoid prejudice, bias, offence and opacity. And since a professional body can only work through its employees they must be seen to embrace and uphold these standards. That cannot now be said of Andrew Gambier, who wrote deeply prejudicial and offensive material, sufficient to justify professional sanction, from behind a veil of secrecy designed to veil his identity from his own professional institute who also happened to be his employer.

I have no desire to see anyone out of work. But professional standards exist for a reason and all professional institutes have a duty to uphold them. The ACCA is known to be deeply antagonistic to any issue relating to tax justice, improved accounting disclosure and country-by-county reporting. Gambier might well fit into its ethos, but his conduct cannot. I will watch what the ACCA does now with interest.