HMRC has sacked thousands of its staff in the last year. All of them did invaluable work collecting the tax that might prevent austerity, preserve the NHS, pay pensions and improve the quality of people's lives. They also kept the tax system working.

This is the result of that reckless policy, taken from a report published by HMRC this morning: 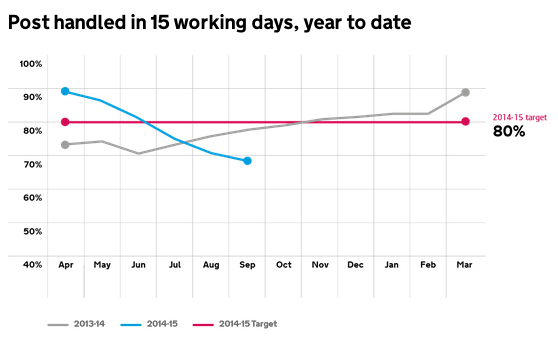 Post handling at HMRC appears to have effectively collapsed. HMRC admit that this is in part because they moved staff to handling tax credit renewals. They also claim that they are receiving less post, as if this is an excuse. But it isn't. This is simply an organisation that is now so under-resourced that it is at breaking point. And the UK can emphatically not afford a broken HMRC for all the reasons I explain here.

When will this stupidity end?

And when will we get an Office for Tax Responsibility to monitor this sort of nonsense that HMRC produces?