A new report by PCS, the union for most staff at HMRC, issued this morning, reappraises the UK tax gap and suggests it was £119.4 billion in 2013/14, and is rising steadily.

I wrote the report on PCS's behalf.

Building on work I published earlier this year, funded by Oxfam and the Joseph Rowntree Charitable Trust, this new report reviews the three main components of the tax gap and in the process replaces the estimates I made of the tax gap for PCS in 2010.

The tax gap is the difference between the tax that should be paid in the UK is the tax system worked as parliament and HMRC intended and the amount actually paid. It is made up of three parts:

The amount of debt outstanding has fallen in recent years, but the amount of debt written off as irrecoverable or discharged by HMRC during each year is growing. In 2013/14 the estimate of tax debt is as a result £18.2bn.

This is a reduction from the estimate of late paid debt used in 2010 of £25 billion, but since it is now an annual cost and not a point estimate is fully inclusive in the tax gap. HMRC will, of course, challenge this figure, as they do all others in the report.

The figure for tax avoidance estimated in the report is also down from that estimated in 2010, at £19.1bn for 2013/14. The figure is
lower than the £25bn estimated in 2008, which reflects declining corporation tax rates (which means the amount avoided also declines, automatically), declining capital gains tax rates, and a likely decline in non-domicile activity as a result of legislative changes as well as caution being made in other estimates.

At the core of this avoidance estimate is HMRC's own estimate of tax avoidance and tax lost to legal interpretation disputes, which makes up approximately half the sum. The remainder relates to issues such as the use of permanent establishment rules by the likes of Google that HMRC refuses to consider avoidance even though it at the core of international efforts to beat tax avoidance and other similar issues which have vexed HMRC in the past but which it is refusing to consider as avoidance at present. The fact that the figure has fallen might seem like good news, but when most is the result of falling tax rates there is little to celebrate.

Most worrying is the key finding of the report, which is that tax evasion is now likely to amount to £82.1 billion a year, and is rising. This estimate is an increase from 2010. The detailed calculations are based on 2011/12 and then projected to 2013/14, as shown in the following tables: 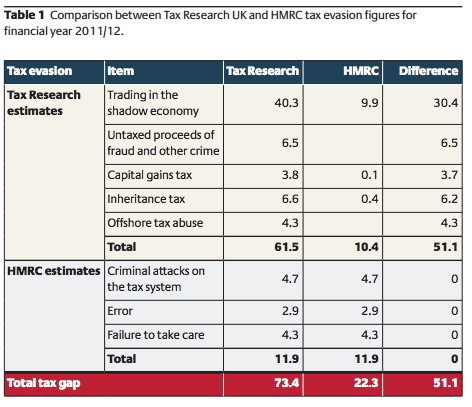 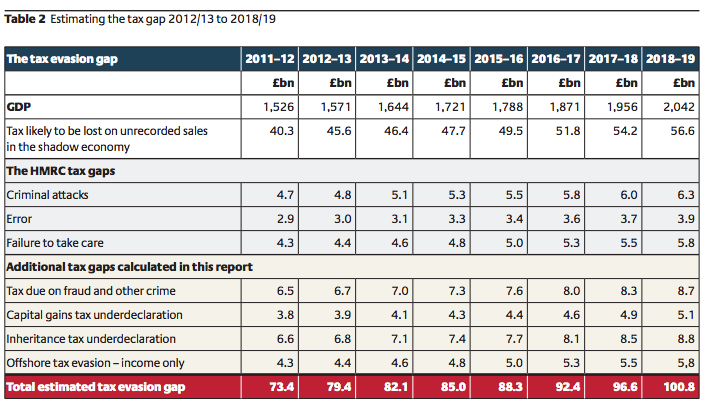 Projections are, of course, dependent upon the accuracy of Office for Budget Responsibility estimates of GDP.

It will be noted that in some areas I simply accept HMRC estimates of tax evasion: on occasion there is no reason not to do so. The estimates are likely to be sound. This is especially true of errors within the tax system where the IMF noted that HMRC performed well when reviewing their work in 2o13. The IMF were, within the boundaries of the normal diplomatic language they use and the fact that they were consultants on this occasion and no consultant overtly criticises their client, not so complimentary about HMRC's ability to capture data on errors outside the tax system - which, of course, is precisely what most tax evasion is. Here they thought there was room for improvement in HMRC performance and I have explicitly looked for areas where I think this is likely to be the case.

My work on the shadow economy has already been discussed and I will not reiterate that here. It will however be noted that I have explicitly identified other areas where a review of data in the economy as a whole suggests that declarations on tax returns are likely to be seriously understated. So, for example, data on both house price sales and share trading suggest declarations for capital gains tax purposes are likely to be heavily understated whilst data on total UK asset worth strongly implies that there must be serious under-declaration of the value of estates for inheritance tax purposes, having made substantial allowance for available reliefs. More tax is also likely to be lost to offshore activity than HMRC estimate whilst tax is also lost as a result of criminal activity and fraud in the UK, and although the chance of recovery is particularly low here the failure to record the loss is important: the tax system is intended to deliver greater equality in the UK and all ways in which it fails to do so need to be recorded.

Other areas where there is likely to be significant abuse, such as rental income, are explored in the report, but wherever there is risk that an identified non-disclosure has already been covered by activity in the shadow economy new and refined estimates have been excluded from totals to eliminate risk of double counting.

The resulting estimate is, I stress, just that i.e. it is an estimate. I am not for a moment seeking to claim spurious accuracy, and in reality the estimates must be mid-points in ranges. As is also apparent from all the work I undertook, I round estimates down, deliberately. What is important then is the difference in the estimate offered from that made available by HMRC and to consider the reasons for this.

There are a number of such reasons. The first is HMRC's outright refusal to estimate or even consider some tax avoidance on which they are, however, heavily engaged. Why this should be is hard for most people, include the Public Accounts Committee, to understand.

The second relates to debt where the difference between a debt discharge and an irrecoverable debt appears to be down to semantics or a lack of resources to pursue a sum previously considered owing. HMRC need to allocate considerably more resources to this issue, either by having sufficient staff to get their initial debt estimates right, or by having enough staff to pursue debt owing, or by offering better explanation as to how they can write off so much debt without apparent reason give. However looked at this data highlights considerable failure at one or more points in the tax system that imply more resources, better working and more accurate assessment is needed and all justify inclusion of this estimate in the tax gap as a result, which their own estimates gloss over.

Third, when it comes to tax evasion, what the estimates I offer really suggest are that HMRC's estimation methods are woefully inadequate. It is simply absurd to estimate losses to tax evasion on the basis of the tax returns that are submitted to HMRC when, very obviously, the failure to submit a tax return at all is the main way in which a tax evader seeks to achieve their goal of non-declaration of tax owing. This seems to be so glaringly obvious it should not need pointing out, and yet it has to be, because as a matter of fact HMRC do not look at data outside the tax system to estimate most of the tax evasion gap. It is, inevitably, and seriously, understated as a result due to the most basic of methodological errors on its part that fundamentally undermines the credibility of the data it has to offer.

In my work I have sought to look, within the resources and time constraints that are inevitably imposed on me, at the alternative data that is available on which I can estimate tax gaps. These are all detailed in the fuller report that PCS will produce in the next day or so based on my work. Of course there may be better methods to use than those that I have offered, and I have no doubt at all that if more resources were available then these estimates could be refined and made more useful. I am not, therefore, suggesting for a moment that I am offering a definitive answer on the tax gap. What I am saying is that with the resources available to me, and simply using the logic that if you are looking for tax evasion then you have to look for evidence outside the tax system as well as within it or you are inherently and inevitably bound to seriously understate losses, then the estimates I have offered are the best currently available of the amount lost to the UK tax system each year.

HMRC will, predictably and with certainty, disagree and ministers will no doubt echo what they have to say, as will right wing commentators on this issue (who seem to think HMRC incapable of anything but estimating tax gaps correctly) but the reality is that it is time for HMRC to take this issue seriously and instead of investing heavily in defending its own inadequate tax gap methodology (as it has done over the last few years) it is time for it to sit down and talk about how its estimates can be improved to take into account the very real, and logical, criticisms I make here. Then we would see progress.

And then we might see more tax collected because then it might be obvious to HMRC senior management and ministers like that we need considerably more investment in HMRC if we are to have the fair and just tax system we need in this country that ensures that everyone pays the right amount of tax, in the right place, at the right rate and at the right time, which should be HMRC's goal if it is to not just to collect tax but play its full part in building a tax system that is the foundation of a fair market economy where everyone competes on a level playing field as a well as a fair society where the tax system delivers social justice, not least through redistribution of income and wealth.

If there is a message from this report it is that HMRC's goals need reappraising, and re-estimating the tax gap would be an indication that this process had begun.