Michael Meacher (who is speaking on the subject of the UK Corporate and Individual Tax and Financial Transparency Bill in the House of Commons as I write) had this letter published in the Guardian this morning:

Despite the budget deficit not reducing over the last three years, the government has still not tackled the huge black hole of tax avoidanceand evasion (G20 expected to sign off tough anti-evasion pact, 5 September). That's why I am promoting a bill to ensure that the tax liabilities both of the wealthiest individuals and the biggest corporations are made public and that the beneficial owners of companies who hide behind nominee shareholdings are also made known. Such tax enforcement could raise tens of billions of pounds for the exchequer.

First, the bill tackles the secrecy shielding the tax affairs of both large companies and wealthy individuals by requiring the tax returns of the top 250 in each group to be put on public record. That data would enable the tax abuse currently costing the country at least £35bn a year to be effectively addressed for the first time.

Third, the bill requires that companies identify their beneficial owners and pass these details to Companies House. To ensure they do, banks will also be required to report the information they collect under money-laundering regulations to Companies House which will then publish it, including the real trading address of a company, who its directors and beneficial owners actually are, and where they're located.

Fourth, the bill would then grant HMRC the power to access a company's bank account data so that estimated tax assessments could be raised if the company had refused to supply accounts, and the directors and beneficial owners would then be responsible for paying the tax. The bill would also extend all these obligations to the tax havens in UK crown dependencies and overseas territories.
Michael Meacher MP
Lab, Oldham West and Royton

I did, of course, write this Bill. 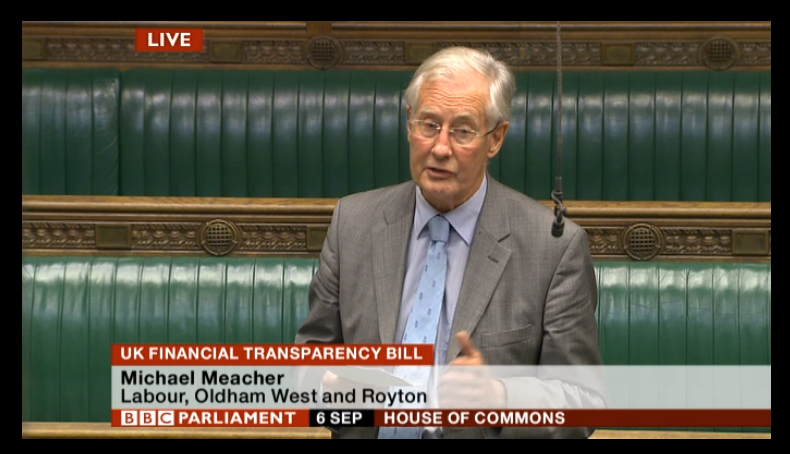