Jersey is doing all it can to oppose full information exchange with the UK, and that can only be to help tax evaders

Three weeks ago I asked some questions of Jersey on this blog. Since this blog is well read in Jersey - most especially by those in power in Jersey - the result was that the questions were sent to them, by Deputy Geoff Southern, who it is fair to say is a friend of justice in Jersey. As a result we now have some answers: 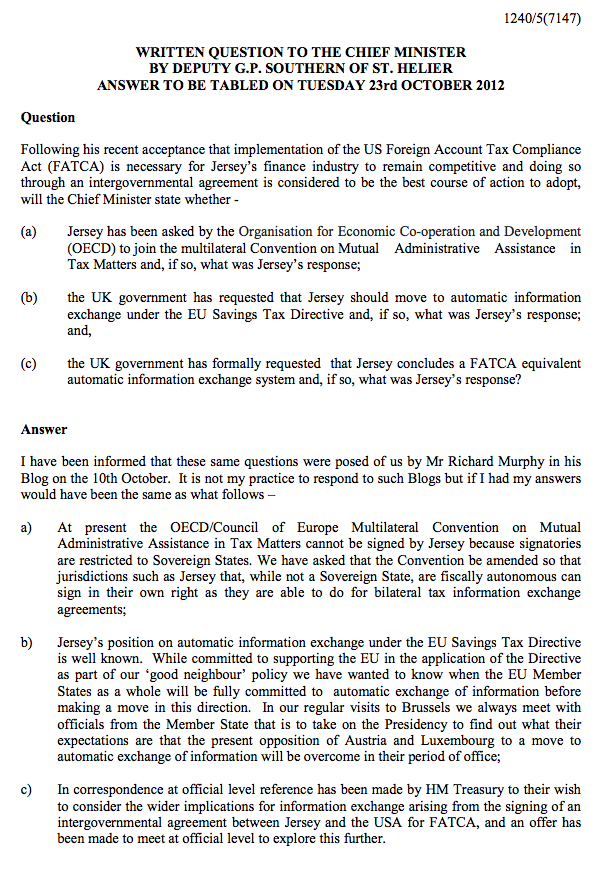 Well, let's ignore the silliness at the start, since it's very obvious that a great deal of the political narrative in Jersey is a response to questions asked on this blog and on that of the Tax Justice Network, and let's look at the real subtext to the answers.

The second question has not been answered. The question was whether the UK had asked Jersey to move to full automatic information exchange under the European Union Savings Tax Directive and there is no hint in the answer provided that it refers to the UK. So let me give the real answer: the UK has asked and Jersey has said no. That's the unambiguous case.

The third answer is another exercise in prevarication. I'll tell you the real answer: the UK has made clear to Jersey that if it can be FATCA compliant with the US it can provide the same information to the UK. And Jersey is saying at best it may attend a meeting about it. Take that as a no then.

So much for Jersey's claim to be fully cooperative in information exchange: the truth is is it doing everything possible to be as opaque as it can be and there is only one possible explanation for that, which is that it knows it is harbouring tax evaders and wants to continue to do so. After all, automatic information exchange is solely intended to stop tax evasion and Jersey is opposing it. No other explanation for its behaviour bar its desire to ensure that tax evasion remains possible within its domain is  possible or credible.