I have written extensively on the 50p tax rate and came up with the biggest estimate published on how much the Revenue would raise from it - based wholly on their own figures. That figure was a sum of more than £6 billion.

Now we know the government, HMRC and the Office for Budget Responsibility do not agree. So why is that?

Well, let's look at the reconciliation table published by the OBR, which looks like this: 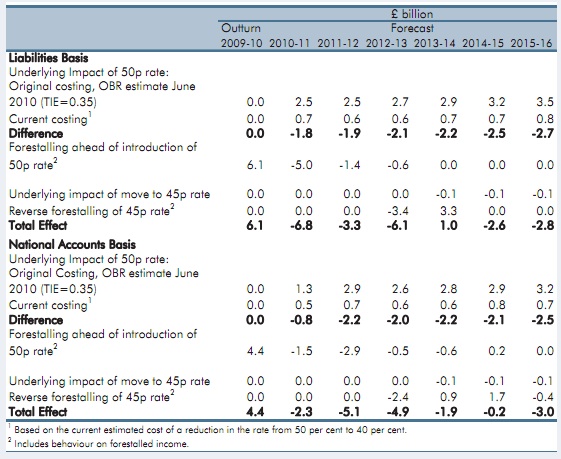 The shifting could not have happened again in 2011/12 - the year for which I prepared my estimate. That would be impossible. The tax could not have been introduced twice! Despite that the yield is actually assumed to go down in 2011/12 - something that seems so implausible that no reasonable basis it could possible be constructed. In that case let's dismiss this forecast as a fabrication and stick to the 2010/11 data of what should be now known tax collected plus tax known to be avoided on a one off basis and the revenue but for that one off avoidance would have been £5.7 billion in a year when I forecast it would be between £5 and £6 billion.

In other words, this data looks to confirm all I said and confirms I was right, here.

It also confirms that these forecasts are now simply a matter of make believe. And that is confirmed in the OBR report where they say:

The assumption that the behavioural response to the 50 per cent rate is more powerful than the original costings assumed means that the cut to 45 per cent appears less expensive than it would have done under the original assumptions.

In other words now there are Laffer curve fans in charge it's assumed that this tax collects no revenue. That's not fact. That's assumption and nothing more. Or the  restatements that I suggested would be made.

Sticking to the facts it should have raised £5.7 billion in 2010/11 which is consistent with my estimate of £6.7 bn in 2011/12 and I therefore maintain my figures to be right and that my estimate of the loss from introducing the 45p tax rate - which will be about £3 billion - is also right.

Which also means that the abolition of this tax rate is a straightforward gift to the rich - as I always predicted it would be.