The budget Osborne has offered today includes some massive tax giveaways. There's almost a billion a year to big business on top of the controlled foreign company £800 million they were already getting. And although he says otherwise, the 45p tax rate is a massive tax giveaway to 300,000 in the UK.

He's doing this because he's still assuming there will be growth. Not as much as he did - the OBR have upgraded this year by 0.1% but downgraded the next two. But what's really worrying is how they think that growth will happen. This is indicated in the following graph, taken straight from the Budget statement: 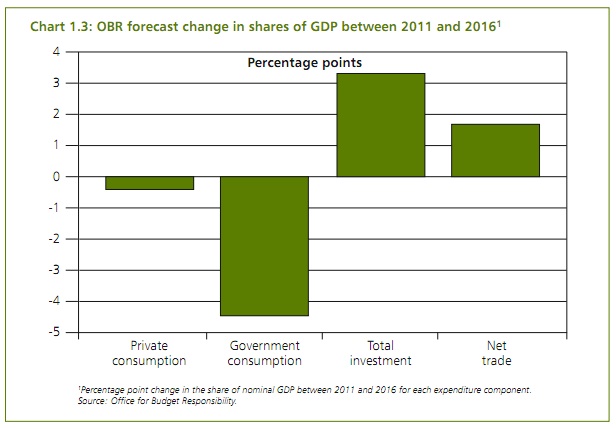 So we, as consumers, are going to be worse off. That's good news!

And the government is massively contracting.

And although the OBR say worldwide there could be recession, and certainly no growth, they are nonetheless saying exports will grow - which is utterly implausible and is an assumption that comes from cloud cuckoo land!

But the weirdest assumption of all is that business will invest massively more? Why will they do that? Their customers - whether here, or the government, or abroad - are all going to be consuming less but it's assumed business will invest substantially more. That is utterly implausible. They just aren't that irrational. They want a return before they invest - and since this forecast clearly says none will be forthcoming then that isn't going to happen.

In that case, as ever, this is a budget for balancing the government's books that simply will not deliver. And it can't - because the above four variables are the only ones that will drive growth and if business investment does not - as I am sure will be the case - then all his underlying economic assumptions are wrong. And that's particularly worrying. Especially for his credibility when it comes to the next election.