Ken Livingstone’s tax, and what needs to be done about small company taxation.

Some have suggested I should not have commented on Ken Livingstone's tax affairs over the last couple of weeks. I reflected carefully before doing so, and did so only on the basis that all who took my comments made clear I was actually in favour of systemic reform of small company taxation. In fairness, both the Observer and Telegraph did that. But the issue carries on. Ken has himself now joined the debate saying the comment is just a smear campaign.

So let's have some facts. These are the published balance sheets of Ken Livingstone's company: 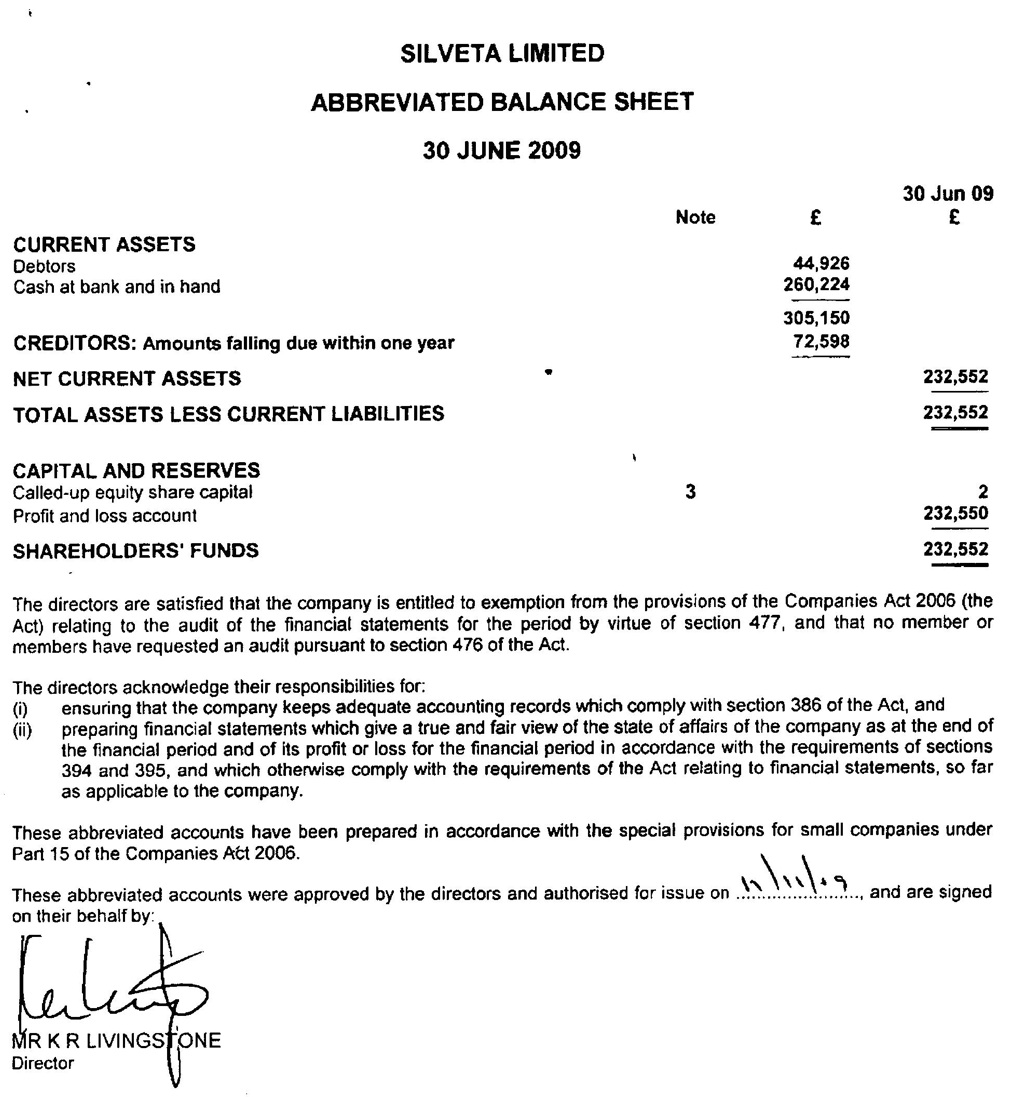 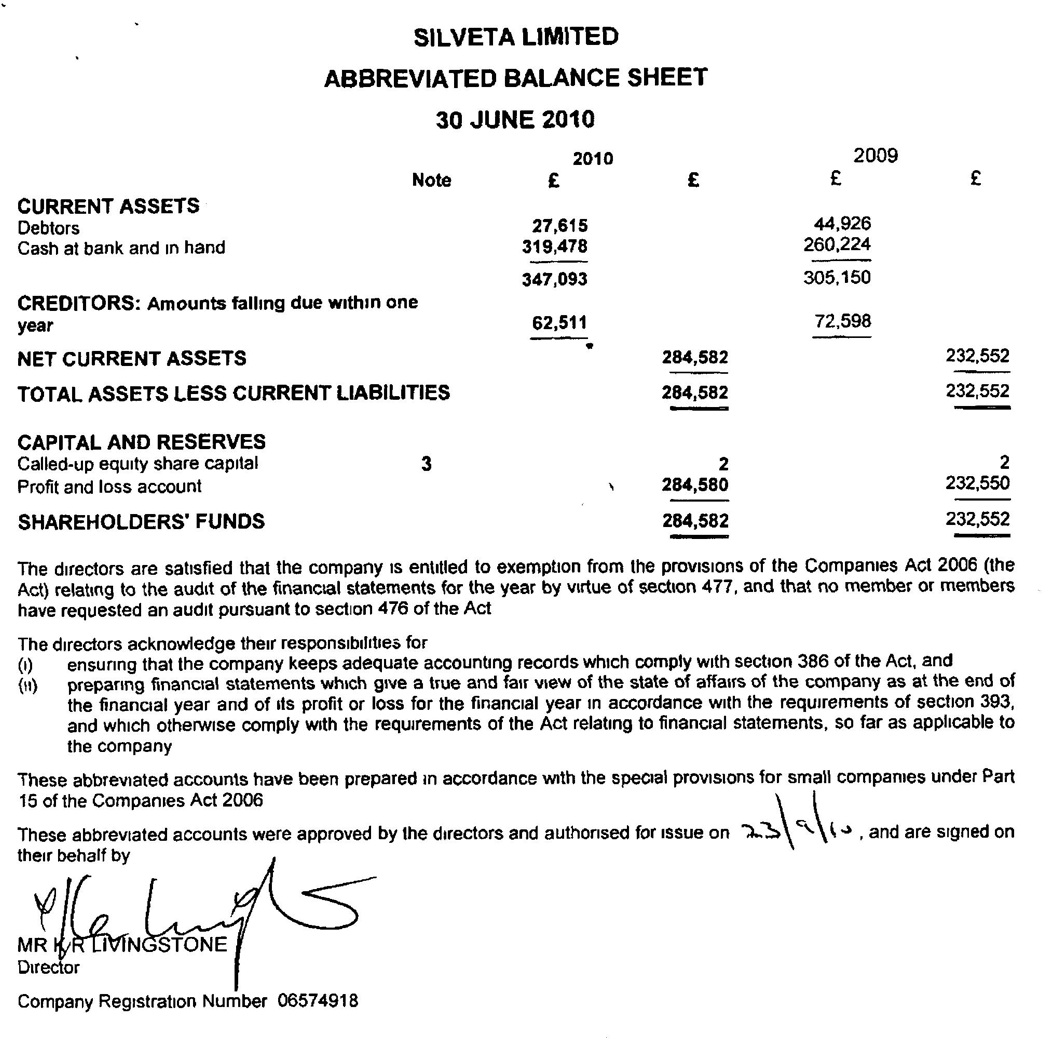 In the first year Ken made a lot of money. We have no profit and loss account for the company, quite legitimately. They need not be filed. I always file mine - in the interests of transparency, but Ken Livingstone chose not to do so. That's his right. But whatever happened, he had £232,000 left over after 21% tax in the company. So profit pre tax, and after expenses was likely to exceed £293,000.

Ken says he had expenses. In the Guardian he's quoted as saying:

Livingstone said he employed a researcher, a press officer and his wife who typed his memoirs. "I am in exactly the same position as everybody else who has a small business. I mean, I get loads of money, all from different sources, and I give it to an accountant and they manage it," he said on the Andrew Marr Show on Sunday.

"You pay corporation tax. If you then take out spending yourself, you have to pay more. What I am not doing is paying income tax on the money I use to employ other people."

"I am not offshore. I am running a small company, just like hundreds of thousands of people. It's a smear campaign currently being run."

Now let's be clear: what is being done here is commonplace. No one is saying otherwise. It's legal. It's regularly suggested by accountants. I have accounted for people doing it - and have owned companies. And I also have to make clear I've changed my mind on the issue.

One reason why is that the evidence has demanded that I do so. I've long argued (since the early 1990s) that forming companies unless there was good commercial reason to do so made no sense. Those I've had in the last decade (bar a dormant formed solely for research purposes) have had the sole primary purpose of giving limited liability from risk on publishing data, software and other materials. Tax has always been a secondary (very secondary) consideration. Anyone who has wanted to run a limited company properly has to have a desire for red tape or accountant's fees that makes little sense to me unless commercial motives strongly suggest the need. But it's clear lots of people have wanted to run companies as these tables on incorporation shows (taken from my research on companies, here, data source for this table Companies House): 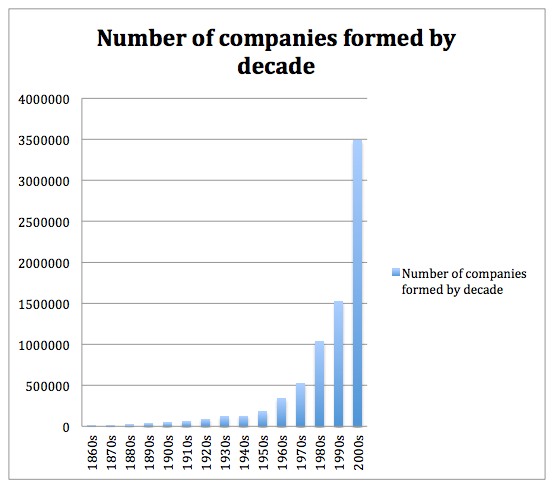 It is glaringly obvious that behaviour changed completely in the last decade. If you want to know why I changed my mind on this issue, that's why. 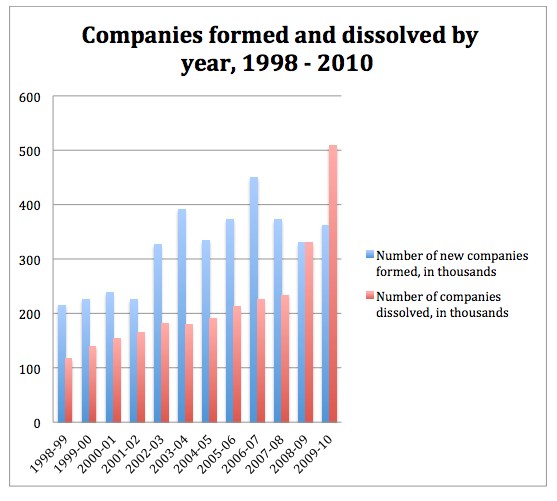 Gordon Brown's absurd 0% corporation tax rate, introduced in 2002, changed behaviour, radically, on small company incorporation. It suddenly became very clear that tax became the driving force for this choice. And the failed IR35 rules (explained here) did not stop this, as is obvious.

As I have shown (here, albeit out of date now but with the principles remaining exactly the same to date) incorporation and paying dividends can save a single person money compared to self employment (my always preferred option for recording my income - and an LLP generates self employed income, for the record). If the income is split in ways that are hard to economically justify based on the apparent contribution of the respective parties to generating it these savings can be significant. HMRC tried to challenge this, and have for all practical purposes failed. I analysed why, here.

That however does not mean that tax avoidance is not going on in scenarios of the type Ken Livingstone has used. His actions are legal - of course. But if tax avoidance involves deferring tax payment or reducing rates at which tax is paid - and it clearly does - then this scenario does potentially do both things, and so avoidance has occurred unless another commercial justification can be shown to exist. So far I've not seen Ken Livingstone offer that - but candidly, this is not about Ken as far as I'm concerned. His numbers just create a case study.

In his case if there are profits in a year after expenses (all of which could just as easily be offset against the income as a self employed person - the rules are the same, after all) of £293,000 then it would of course have been the case that tax at 40% would have been paid on much of this income by Ken Livingstone and his partner if earned in their names. But by paying a few pounds to buy a company and subscribing for £2 worth of shares the tax bill was near enough halved at the time, with the benefit of paying tax in later years and smoothing income over time being secured. I have no idea whether any income splitting took place in Ken Livingstone's case: I'm ignoring it if it did, or not. The simple fact is that tax at maybe 19% on £293,000 was deferred. That's over £55,000.

I'm not saying that won't be paid: it may be in full at some time. But it wasn't in 2009. And given that no other explanation for the company has been given, bar the fact everyone's doing it, and the reason everyone's doing it seems to be very largely tax driven, then this looks like a tax motivated act, even if recommended by an accountant (presumably for that reason).

So, in the face of the evidence that this practice is now so commonplace it can reasonably be said to be distorting behaviour to an unacceptable degree and is likewise distorting tax receipts what can be done about it? The cost of these structures continuing to be used in this way is now too high for the practie to be allowed to continue, in my opinion. That's why I commented on this case.

I wrote about the changes needed, here, back in 2008. I haven't changed my mind since. The summary is that there should be:

1. A change in company law to allow the re-registration of small limited companies as limited liability partnerships. An LLP is tax transparent: its income is taxed as if it belongs to its members even though it is a legal entity that is separate from them for contractual purposes. Tax deferral cannot occur as a result of using an LLP as a result. Income is taxed in the year it is earned;

2. New capital requirements for the incorporation of limited companies undertaking trades, and over time forced re-registration of those that do not meet that standard as LLPs. That might be to require capital as high as £50,000 in due course. This might be necessary consumer protection inb any event;

3. The introduction of a new investment income surcharge chargeable on dividend income at rates broadly equivalent to national insurance charges that would have the benefit of reducing the incentive to split income through dividend payments, would restore the taxation balance between income earned from all sources and allow a reduction in the base rate of income tax without adding substantially to the burden of administration for taxpayers since those liable will, in the vast majority of cases, already be submitting tax returns;

4. Create new, economically justifiable and verifiable standards for splitting income in LLPs so that the risk of legal challenge to such arrangements will be substantially reduced whilst recognising the significant role that the spouses and partners of those who supply their services through owner managed corporate entities play in the undertaking of that activity.

If this were done then:

a. The administrative burdens for many small businesses would be reduced;

b. The certainty of the arrangements under which they can operate would be increased;

c. The rewards that they rightly seek to pay to those who contribute to the management of these companies from within domestic relationships will be rewarded, but within appropriate constraints;

d. The attraction of freelance status in tax terms would be retained;

e. The current injustice that sees income from labour more heavily taxed in the UK than income from capital would be eliminated in large part without prejudicing the required favoured status of pensioners;

f. The incentives for tax planning would be reduced, so simplifying tax administration;

It is because I  believe such change is important that I comment on cases when they come to light. We need a proper choice of structures for undertaking trade in the UK, but one that is not tax driven. At present we have a system that encourages tax avoidance. That is absurd. So too is the tax loss, even if by deferral, it gives rise to. And the time wasted in pursuing those tax savings is wholly wasted when the efforts of countless accountants would be better spent advising their clients on how to make more money, rather than save tax.
Reform is essential.
If Vince Cable is serious about seeking to reduce red tape on business this is something he has to look at, seriously.
And we'd also avoid some of the distracting debates on tax avoidance. Which would be no bad thing.
Donate
14