The far right have always liked to argue that my work on the tax gap is wrong because I categorise tax avoidance as part of the tax gap. But this argument is entirely wrong.

First, let’s refer back to the Revenue definition of the tax gap. It is this: 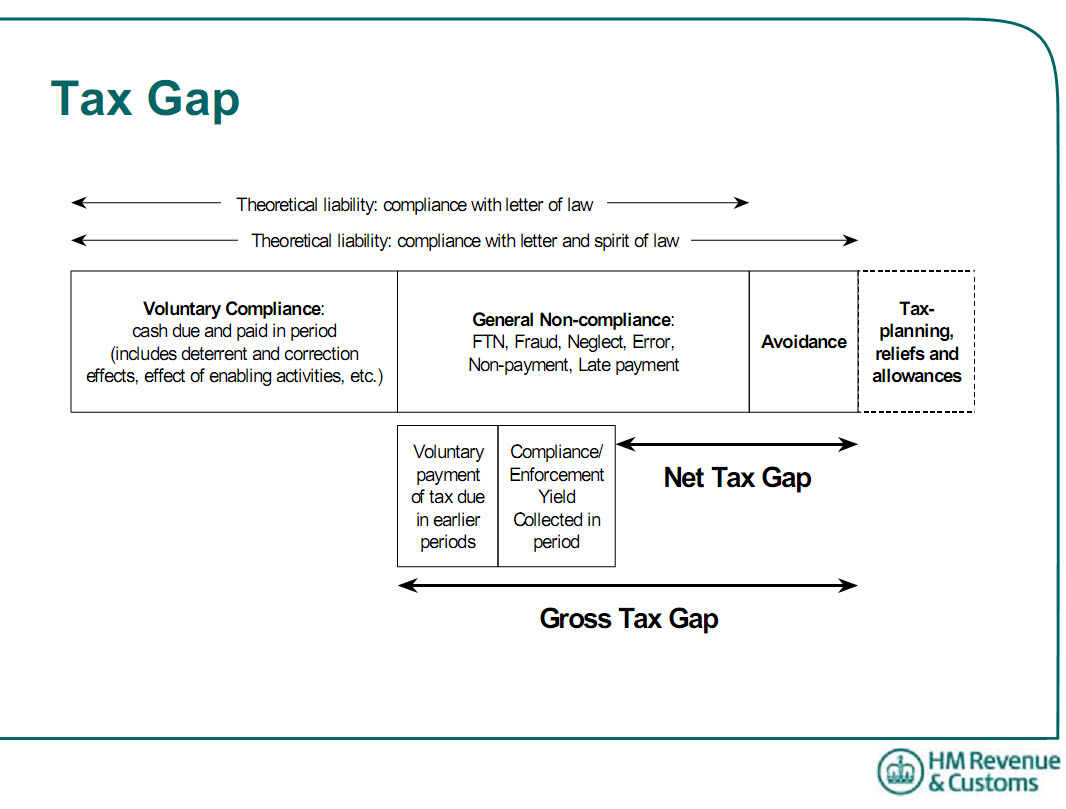 Note that the Revenue quite categorically say that tax planning — that is using allowances and reliefs provided in law for the intention that parliament considered appropriate (in my lexicon, tax compliant behaviour)  is not part of the tax gap. I completely and utterly agree. I have never once suggested otherwise.

And note that David Gauke MP, the minster whose comments I am criticising, did in his speech on 16 June say:

One of the largest factors contributing to the tax gap is avoidance. Tax avoidance is estimated to contribute around 17.5%-around £7 billion-of the total tax gap. It is worth making that point at the beginning because, although those contributing to this debate today have not fallen into this trap, there is sometimes a conflation between the tax gap, which is a considerable figure, and tax avoidance, which is still a considerable figure but is only part of the £40 billion figure. None the less, £7 billion is a substantial sum, and this Government are determined to reduce it as far as possible.

That, incidentally is a sum £2.2 billion higher than HMRC suggest, but let’s ignore that right now and note instead that he is explicitly including the abuse of legitimate tax allowances and reliefs in his definition of the tax gap. There is not a whisker to be found between us on this point.

Therefore all those who wish to argue otherwise are straightforwardly wrong. Worse than that, they are deliberately peddling misinformation. It is, of course, a standard ploy of far right politics. If in doubt read this book.

But let’s also return to the real issue. The only area where this can have any consequence for my work is with regard to corporate tax avoidance. With regard to personal tax avoidance, as noted in my latest work, even the Chancellor has clearly dismissed the figure produced for personal tax avoidance by HMRC as being wholly unrealistic — having suggested during his budget speech that all of it can now be completely attributed to some specific capital gains tax abuses, which makes clear how significant an underestimate the Revenue offered when publishing their own latest estimate in December 2009.

On corporate tax avoidance though, as I have noted in my report issued yesterday, new data does suggest that there is reason to now go back and reappraise  my estimate, but that is because HMRC appear to have responded to the debate which they acknowledge I and the TUC created by publishing new information.

But, having even said that, it is readily apparent first of all that HMRC do consider companies are tax avoiding abusively using the definition I use — because they acknowledge that fact and suggest that the abuse amounts to at least £3.4 billion a year. I, of course, suggested it to be £12 billion year on the basis of an assumption that the abuse I detected in large companies might be extrapolated to small companies. The new HMRC data suggests that this extrapolation may (and I strongly emphasise the may) not be appropriate. However as that would lead to the paradoxical situation where small companies are paying tax at a rate that almost exactly accords with the anticipated rate — which my hypothesis suggests they should — but large companies are paying instead at almost exactly the rate my work for the TUC predicted this still leaves an enormous range of questions unanswered — and my basis hypothesis clearly extant. That is hardly an indication that I got my work wrong. And however interpreted the new data does not support the HMRC estimate of the loss to avoidance: that would be about £7 billion on this basis — assuming that is that the avoidance I’m finding  is not hidden undetected (as it may well be) in the Revenue’s measure of taxable profit.

In other words, the maximum likely adjustment that might now be required to my original total estimate (and I have not accepted this is necessary as yet) may be £5 billion.

That’s £5 billion in a total estimate of £120 billion and for reasons wholly and utterly unrelated to the claims far right commentators make. Given that any estimate of the tax gap is just that — an estimate — I’d be very happy with that outcome even if this variance is proved justified — which it has not been as yet.

So, let’s summarise this: it is clear that the far right have no idea what they’re talking about, clearly can’t do statistics or appraise them, do not understand what tax avoidance is or, alternatively, peddle straightforward incorrect information for their own political purposes.

Actually the “or” in that last sentence is probably misplaced. It seems very likely it should be an “and”.

Either way: they’re wrong. And like all pedlars of myths should be ignored.