I was interviewed twice on the radio on Friday evening to discuss John McDonnell's new fiscal rule, once on LBC and the other on Radio 5. In both cases the interviewers were quite explicit in stating that it was known that Labour always borrowed more than the Conservatives and that was why the electorate could not trust them with the economy. I knew that evidence I had prepared a year ago did not support that view in recent years (post 1997) but I decided to see if this claim really had any substance to it all at all. This blog is about my findings. There is a note on data sources at the end.

The first task was to secure data on borrowing by year from 1946/47 onwards: this data covers a 70 year period. Labour was in office for 28 of these years and the Conservatives for 42.

The next task was very simple: I  calculated the total net borrowing in Labour and Conservative years and averaged them by the number of years in office. All figures are stated billions of pounds in all the tables that follow and in this case are in original values i.e. in the prices of the periods when they actually occurred:

This though, is a bit unfair: the value of money changes over time. So I restated all borrowing in 2014 prices to eliminate the bias this gives rise to. This resulted in the following table:

So then I speculated that this may be distorted by events since 2008. That is what the Conservatives would claim, after all: they would say that they have spent six years clearing up Labour's mess. So I took those years out of account and looked at the first 62 years of the sample. First I did this in original prices:

Not quite so close after all: Labour definitely borrowed less.

But maybe the Conservatives repaid more. I checked that. This is the data in both original and 2014 prices:

Labour not only repaid more often, it turns out: it also repaid much more in total and on average (not shown) during each year when repayment was made.

First, Labour invariably borrows less than the Conservatives. The data always shows that.

The trend does not vary however you do the data.

Or, to put it another way, the Conservatives are the party of high UK borrowing and low debt repayment contrary to all popular belief, including that of most radio presenters. Which means that the next time I am presented with that nonsense I will be very firmly rebutting it.

For those interested, this is the overall summary table: the pattern in the right hand column is really quite surprising: 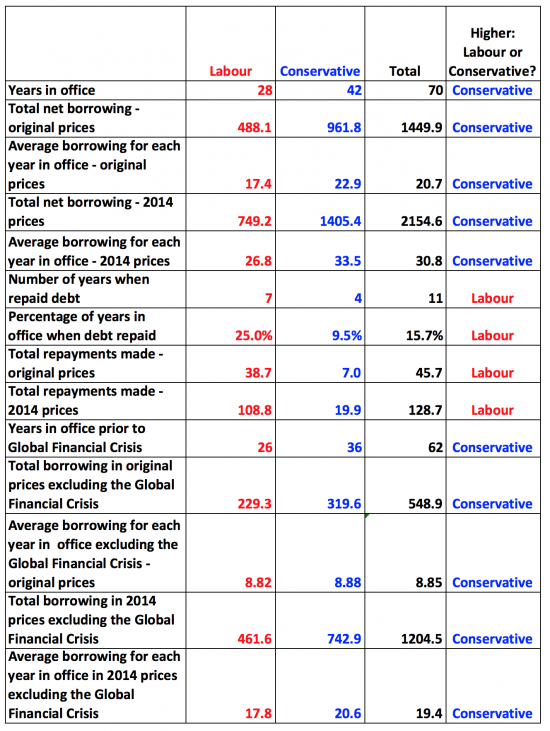 The basic data on borrowing came from the House of Commons Library.

GDP deflator data came from similar sources but was estimated for 2015-16 based on 2014-15 and for the period prior to 1955 based on data for 1955 - 65. It is unlikely that this estimate materially changes any finding.

Governments in office for a year were determined in election years by the number of days each had in office: the party with the greater number being attributed the whole year.