Paul Krugman drew my attention to a US report on comparing the quality and cost effectiveness of healthcare systems in seven major countries. The report he referred to was written in the context of the debate in the US on healthcare, but is just as applicable to the UK debate on the future of the NHS. Its summary is as follows: 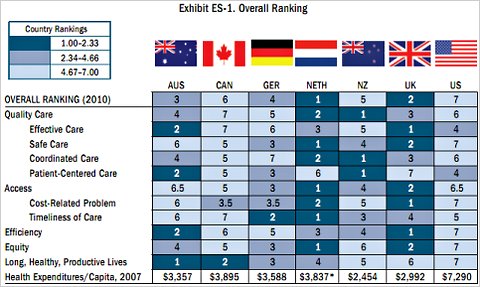 The UK ranks #2 overall. Hardly surprising since on 11 indicators it ranked in the top 3 on 8, and if quality and access are treated at their combined rather than disaggregated levels then it was in the top 3 on all indicators bar longevity of healthy life.

And all that for a much, much lower cost per head than the US market based system but also less too than everywhere but New Zealand, which ranks pretty poorly on everything but being patient focused.

So what does this say? I suggest that the longevity problem is not a health issue: this is a societal issue. It's the consequence of poor housing, inequality, poor health education, and many more such factors reflected in issues such as high obesity rates related to poor diet: a peculiarly British problem. The NHS cannot solve such problems. It's not reasonable to berate it for failing to do so.

That aside, care is great in the NHS. OK. it's not as patient focused as desired, but as the report says this is an issue where all countries could improve. No doubt that's true, but we trade something important here: price for patient focus. Of course people can be at the core of the NHS, but you seriously increase the cost if you double the time seeing the patient: most of NHS cost is labour. The choice is a straightforward one: you can have a patient focused NHS so long as you're willing to pay for it. If you are not willing to pay for it the patient focus will come at the cost of significantly reduced health outcomes. It's a trade-off that I think most would not make if they were given the choice. I think the NHS has got this right.

But most of all what this report says is that the room for efficiency  gains in the NHS  looks to be incredibly small.  Patient centred activity has already been reduced to save cost. Timeliness has been compromised a little to secure savings.  Efficiency is already rated as the highest in these seven countries. That's not surprising, the clear raw data shows that be the case. How, in that case, is the NHS going to deliver massive increases in efficiency in a system that is already operating at way above international standards?

We need to get real: the NHS is already delivering extraordinary value for money. Private sector alternatives are exceptionally expensive, as the US proves, with worse quality outcomes (as the table shows).

I am not saying that the NHS does not need improvement:  of course it does.  but to suggest that it needs a root and branch reform involving a fundamental restructuring because it is failing, as the Conservatives imply, is not just wrong, it's a straightforward lie.

The truth is that the NHS is actually a stunningly cost-effective supplier of high-quality healthcare, so let's celebrate the fact, and help those working in it to make it even better rather than going out of our way to destroy its structure, the morale of those who work in it, and to overburden them with impossible tasks which they can never fulfil  that can only result in worse outcomes for us all.