The World Bank has issued a new paper providing measures for the size of the “shadow” economy in 162 countries. The UK is one of them.

It’s important to note in this respect how the paper defines the shadow economy. The authors say:

This paper utilizes a more precise definition of the shadow economy so as not to deal with typical underground, classical economic crime activities, which are all illegal actions that fit the characteristics of crimes like burglary, robbery, drug dealing, etc. We also exclude the informal household economy which consists of all household services and production. Furthermore, this paper does not focus on tax evasion or tax compliance due to time and length constraints, and the fact that tax evasion is a subject on which a lot of research has already been undertaken.

In the UK this is as follows:

a) The authors offer two different measures: I have shown both

b) The authors do not have data for series 1 for 2007: I have inserted a measure which reflects a smaller rate of increase than in the previous five years to allow a cautious average for that year to be calculated. This does not distort the findings noted below and is a statistically cautious extrapolation.

This data can be graphed as follows: 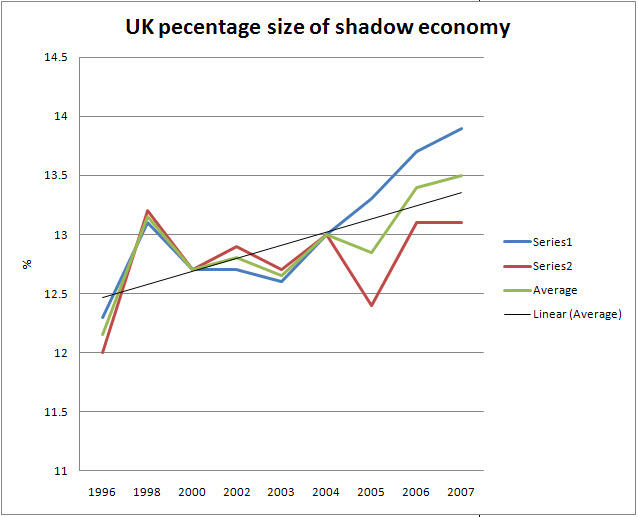 There are three things to note. Firstly, as the trend of the average shows, there is an unambiguous increase in the size of the UK shadow economy over this period. This is worrying, and it is a trend that is bound to be exaggerated by the recession. The ratio had though, on average, reached 13.5% in 2007.

Third, UK tax revenues as a proportion of GDP historically have averaged in total between about 35% and 37% of GDP according OECD data, with that ratio being higher at the end of the period noted above, overall. The ratio may have risen now because GDP growth has fallen, but I am not going to allow for this as it would increase the ratios noted here without evidence to support the claim, and this I will not do. .

In combination this data therefore suggests that at a minimum some 13.5% of the economy is operating in the shadows in 2010. At a minimum this is GDP of £197 billion.

Tax at 37% should have been collected on this sum and has not been. This represents a sum of £73 billion.

My estimate of tax evasion in March this year, based on the VAT tax gap of 13.7% on average over a seven year period, suggested that tax evasion cost the UK £70 billion a year. The above analysis, using entirely different data different suggests it might be £73 billion a year.

I do not think that is chance. I think that suggests that this loss is a matter of fact. Which is why we need to act on it.