The Bank of England’s going to increase interest rates today. It may be by 0.25%. It could be by 0.5%. But the question is, why are they choosing to increase the price of money when we already have an inflation problem? A thread to explain…..

The Bank of England (BoE from now on) believes in what might best be called conventional economic theory. This says inflation is caused by too much money chasing too few goods available to buy, which they say means that prices are then bid upwards.

The BoE believes as a result that its job is to reduce the amount of spending power in the economy. It thinks that if it does so then there will be less money available to people to spend, and so the pressure on prices will fall.

The reason that there will be less to spend is, of course, because those who are borrowing will have to spend more in interest payments and as a result will have less to spend out of their incomes on anything else.

The BoE also believes - as indicated by Governor Andrew Bailey’s appeals to people to accept below-inflation pay increases earlier this year - that if only real wages can be reduced during a period of inflation this too will reduce inflationary pressure.

The thinking behind this claim - which is clearly spilling over into government pay offers of well below the rate of inflation - is that cutting real wages does again reduce the amount available to spend in UK households.

There are many problems with this thinking. Bear with me whilst I work through them in turn. I think you probably need to know this stuff because there’s a very good chance you will be a victim of the BoE’s deeply mistaken logic.

Firstly, this approach to inflation assumes that UK households have too much money to spend. That is why the BoE thinks some spending power must be taken away from them. But this is nonsense. 20% of all UK households are already struggling to pay bills and many more will soon.

The problem that most people in the UK economy has is that they do not have enough money to pay basic bills like rent, gas, electricity, the mortgage, water, council tax and broadband. It’s not that they have too much money. They don’t have enough.

So the first and fundamental problem with this policy is that the BoE is prescribing a cure for a problem that very clearly does not exist. For most UK households there is a shortage of money right now, and not an excess.

How can people paid so much money to do such an important job get something so wrong?  That is easy to explain. Precisely because these people are all very well paid they simply do not understand the world of those who cannot make ends meet. Everyone that they know can.

That brings me to the second fundamental problem with this policy. It is that it does not recognise that the UK is made up of two countries. They are the ‘haves’ and the ‘have nots’, and they behave quite differently economically.

This chart is on the allocation of wealth in the UK between ten equal groups in society (so-called ‘deciles’). It also shows the breakdown of the wealth that those in each group have, on average. The data comes from the Office for National Statistics. 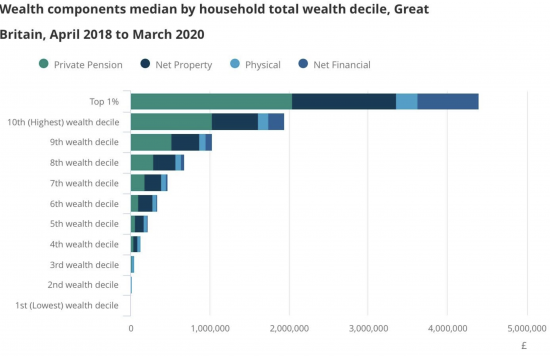 Now note that outside the top 10% the amount of financial wealth that any group has is small. Many groups, admittedly, have very little at all. But almost all those outside the top 10% have most of their wealth tied up in houses, pensions and things like cars. Savings are low.

This matters when it comes to the Bank of England’s policy of raising interest rates. The 90% or so of ‘have nots’ are likely to pay more interest as a result of the BoE interest rate rise. They have few savings and quite a lot of borrowings on their properties and other loans.

On the other hand, the ‘haves’ gain from the BoE policy. They by and large have few if any borrowings and they stand to gain from earning more on their savings after the BoE has raised interest rates.

Now it just so happens that there is one group in society who do have too much money, as the BoE assumes right now. They, unsurprisingly, are the ‘haves’. Their savings can cushion them from the blows of price increases. They have money and other assets they can fall back on.

Times are not hard for the ‘haves’ right now. And the BoE is just about to make it easier. They will actually have more to spend because of the BoE interest rate rise. No one else will.

What this means is that counter-intuitively, the one group in society where there is a real need to reduce spending power because they are the one group who can push up prices in the way the BoE thinks happens are precisely the one group who will not be punished by BoE policy.

But all those groups who do not have the spending power to increase prices are exactly the ones that the BoE is going to punish with it policy. They could not have got things more wrong if they tried.

Unless, of course, they have not got things wrong and what they are actually doing is seeking to ration the availability of goods and services in society in the most perverse rationing system ever invented, where those with most need get least and those without need get most.

There is a third reason why the BoE policy will not work. It’s not just the assumption that people have too much to spend that the BoE get wrong. They have actually totally failed to identify the proper cause of this inflation.

The inflation we’re suffering is the result of shortages of oil, gas, fertiliser and food, in the main. Some of these are real (food, in particular). Others are being stoked by speculators who are profiting from them, which is why oil companies are declaring such big profits now.

Almost none of those issues arise within the UK. The causes of short term inflation that existed last autumn, like the shock of Covid reopening, have almost all been solved now. Instead, almost all of these causes of inflation arise directly or indirectly outside the UK.

As a result there are three things to note. First, the BoE and UK government have little influence over them. Second, they are in no way impacted by anything the BoE does by changing interest rates. Third, inflation will not be stopped as a result of the BoE interest rate rises.

So, in conclusion, the Bank of England has misread the economy; it is prescribing the wrong policy; it is going to make all the ‘have nots’ in the UK worse off as a result, and the ‘haves’ better off, and it’s going to achieve nothing with regard to inflation.

But it will succeed in making life very much harder for up to 90% of the population, and for a significant part of those people nigh on impossible. What I want to wish is that this is not its aim. But I can’t think that. I think this is deliberate.

And it’s the fact that the BoE is doing this knowing that people will suffer that sickens me. They actually want that suffering to happen because they think that is required if they are to indicate their intention to eliminate inflation, even though they have no clue how to do so.

That they are also indifferent to the hundreds of thousands, if not millions, of people who will also lose their jobs as their employer’s fail because of increased interest costs is almost incidental when considering this callousness, but it has to be mentioned.

Rarely in the history of economics will so much damage be caused by so few to so many and all in the interests of pursuing economic dogma when economic reality demands something very different.

What would that difference be? Restoring zero per cent interest rates is what the BoE should do. In the face of this inflation crisis it is their job to cut the cost of money.

And then they should be saying that the government must tackle the excess wealth of the ‘haves’ in the top 10% of wealth holders.

And that the government should be directly assisting those most impacted by this crisis with additional support.

Will the BoE do that? No, of course they won’t. They’ll be raising interest rates instead. They want the misery to begin.