I have been asked for a blog post explaining the double-entry that explains the money creation in the central bank reserve accounts that commercial banks hold with the Bank of England and apologise for the delay in delivery: this took more time to write than I thought it would. The full post is below, but for those who would find it easier there is also a PDF version, here.

I have already written a note about what the central bank reserve accounts that commercial banks maintain with the Bank of England are, and how they are funded. However, that note could not answer every question that comes up with regards to these accounts, and in particular how they operate on a day-to-day basis.

The conceptual problem in understanding this does, I think, result from a lingering belief that most people have somewhere deep down inside them that there really is something physical and tangible that they might actually touch which represents money. That, however, is completely untrue. Even notes and coins are simply physical representations of an intangible promise made by the government to pay whomsoever might hold them as property at any particular point in time. They have no implicit value in themselves and yet it seems very likely that people do think that that there is a movement of some form of tangible property between bank accounts when payments are made and received between accounts.

This note seeks to explain why that is not the case and to demonstrate how government spending can both create central bank reserve account balances and simultaneously increase commercial money supply even though the base money and commercial bank created money remain quite separate, one from the other.

To explain this assume that the following quite simple series of transactions takes place:

This seemingly everyday set of transactions gives rise to a great deal of activity behind the scenes. I will try to include reference to only those transactions that are strictly necessary to make clear what is happening apparent. The reality would be more complicated, but explaining why will add little more value.

First of all note that the payment to Freda is the settlement of a debt that the government has created to Freda. They have agreed to pay her each month, and she anticipates them doing so. It is this promise to pay that sets up all the transactions that follow. To record this debt the government debits its cost of old-age pensions paid account in its income statement and credits its pensions owing account on its balance sheet. If Freda kept double-entry books she would debit her pensions due account on her balance sheet and credit her income statement with the £1,000 pension income. This is step 1.

The next task (step 2) is for the government to settle this liability. To do this the DWP instructs the Bank of England to make a £1,000 payment through the Consolidated Fund to the commercial bank that makes payments on behalf of the Department of Work and Pensions. I will assume that is HSBC. So, the DWP records a reduction in its pension owing account (a debit) and a credit in the records it keeps of its account with the with the Bank of England. Both are for £1,000.

Of course, the Bank of England has to also record that transaction in the Consolidated Fund of which the DWP forms a part, but from its perspective this transaction is a debit – the government owes that sum to it. There has to be a credit to match, and there is: the Bank of England credits the HSBC central bank reserve account. Each sum is £1,000. (Step 3)

To simplify matters here (to save noting a lot of transactions in the bank’s own books to record inter-bank transfers), let us assume that HSBC immediately realises that the payment request it has received attached to the funds placed in its CBRA is not one that it can process – as the sort code on it will make clear. So, it transfers the funds straight on to the Nationwide CBRA in step 4.

Now, albeit indirectly, the Nationwide has £1,000 from the DWP lodged in its CBRA. It has an obligation to pay Freda as a result. This it does with commercial bank money. It accepts the debit in its books from the CBRA – the promise to pay from the government – as the guarantee and backing for its own promise to pay Freda – which it creates by recording the £1,000 owing to her as its liability (a credit) to her. (Step 5).

Freda completes this stage of the transaction in step 6. She credits her pensions due account on her balance sheet and debits her Nationwide account in her books, again for £1,000 in each case.

So, to this point we have these transactions: 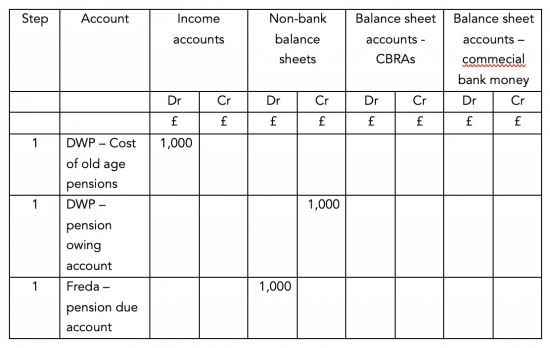 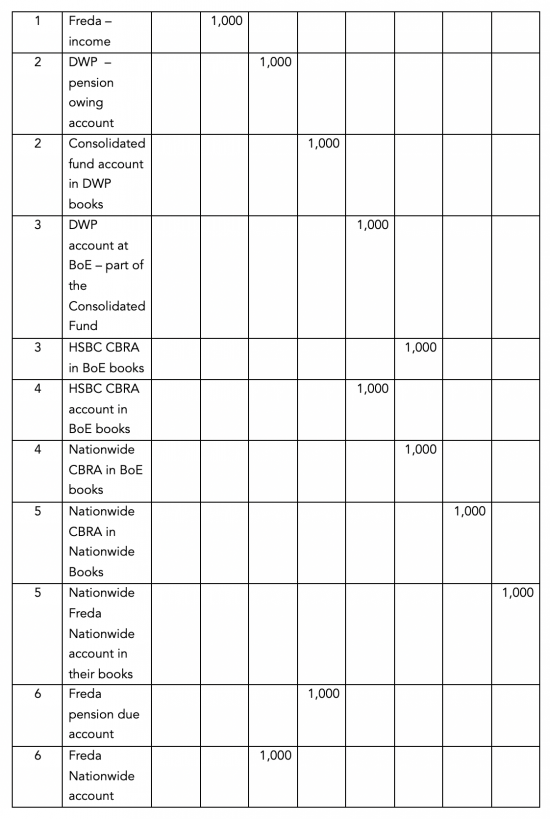 To summarise to here, we have these transactions recorded when all transfers and account balances owing are taken out of consideration if they have been matched during this series of entries: 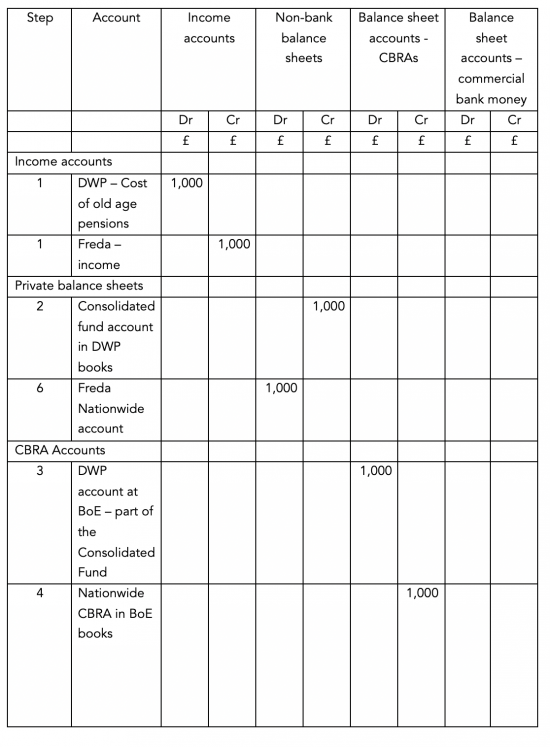 The DWP has paid Freda, and both base and bank money have been made on the way to doing so, without the two in any way cancelling each other out. Note that the double entries match in each pair of columns and especially that there is no leakage into or out of the CBRAs where instead the transactions are matched by those in other records to record the obligations recorded there.

This, though, is not the end of the transactions. Freda now has to pay her husband £400 to be paid into his Lloyds account, and to pay HM Revenue & Customs £200. To continue from where we were then, in step 7 Freda issues an instruction to the Nationwide to pay Tom. She credits her own record of her Nationwide account on her balance sheet and debits her ‘gifts to Tom’ account to record the spend.

In step 8 the Nationwide deducts funds from Freda’s account and records the fact that it now owes this money to Lloyds so that they can pay Tom.

In step 9 the Nationwide pays Lloyds via its CBRA.

In step 10 Lloyds acknowledges the receipt in its CBRA from the Nationwide and as a result records that it now owes Tom £400 by crediting his account.

Tom finally completes this transaction in step 11, recording as a debit the increase in his bank account and crediting his income account with the gift from Freda.

In step 12 Freda acknowledges her tax debt and in step 13 tells the Nationwide to pay it via Barclays, who collect bank payments on behalf of HM Revenue & Customs.

In step 14 the Nationwide deducts £200 from Freda’s account with them and acknowledges it now has a debt to Barclays for credit to HMRC.

In step 15 the Nationwide pays Barclays via the central bank reserve accounts.

In step 16 Barclays records the resulting debt from the Nationwide as a debit and that it now owes HMRC as a credit.

Step 17 acknowledges that this debt to HMRC will be paid via the CBRAs by making the necessary adjustments for that in Barclay’s account before in step 18 the funds are debited as a charge in Barclays’ CBRA and credited to HMRC’s CBRA account. 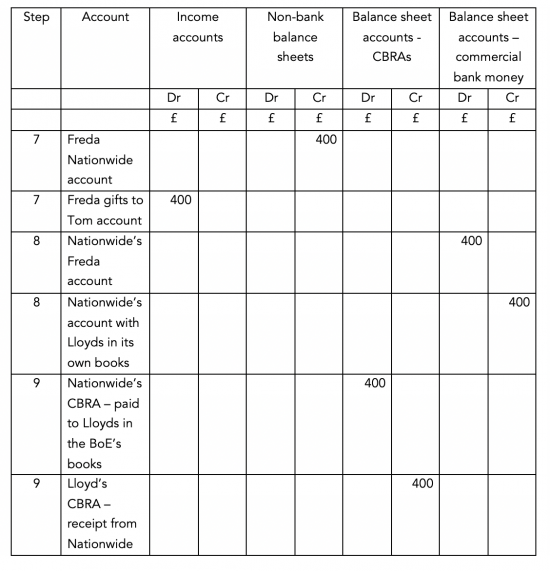 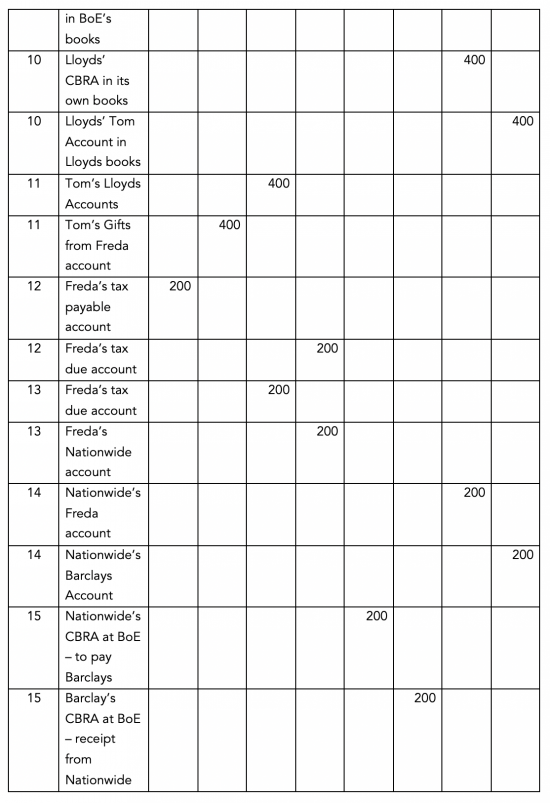 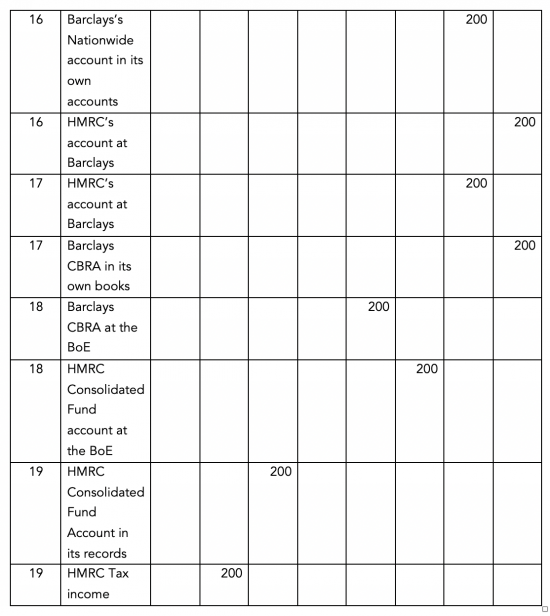 Netting all these transactions out we now get: 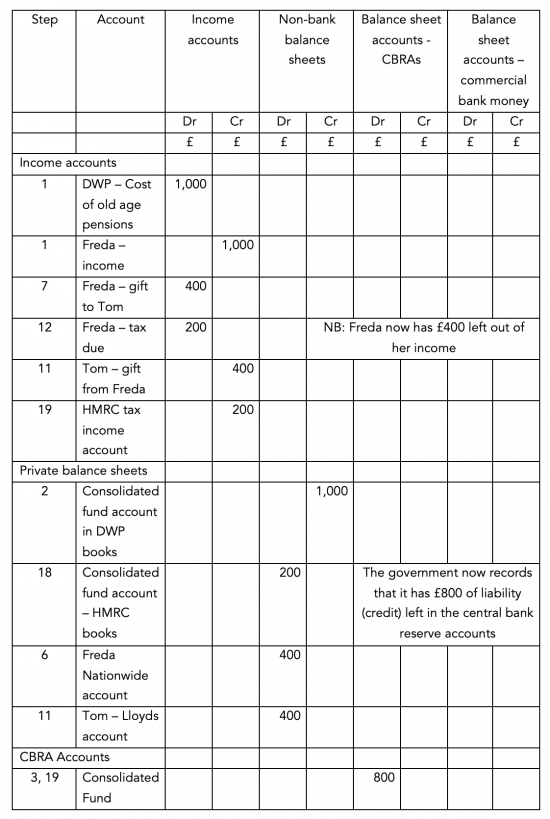 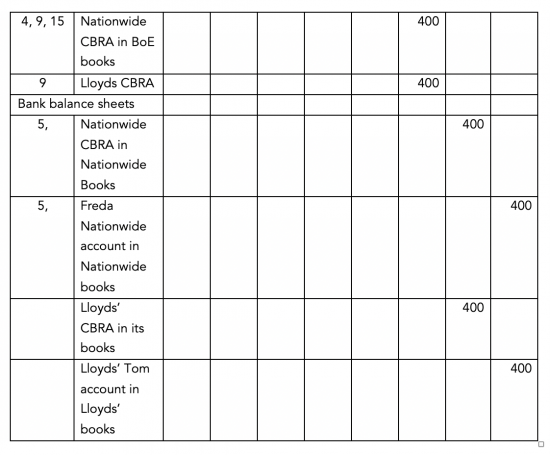 A net £800 of new money has been created via the inflation of the central bank reserve accounts through government spending, which is reflected in the balances of the Nationwide and Lloyds even though originally paid to HSBC.

To match there is £800 of new commercial money created by those same banks, with Freda and Tom being the beneficiaries of this.

Of the original £1,000 of new money created £200 has been cancelled by the payment of tax.