As a result of yesterday’s thread on the relationship between banking, banks and the UK’s central bank - the Bank of England - a number of challenges have been made to my claims. I think there are thee injections, in essence.

The first is that money is not debt. The second is that money is not created ‘out of thin air’ and the third is that the Bank of England does not create the balances on the central bank reserve account deposits that the commercial banks have with it. I think each needs to be addressed. I am going to do so using arguments published by the Bank of England in 2014. On these issues there is sufficient alignment between my position and that of the Bank for me to use their suggestions to support my own.

This chart was published by the Bank of England in 2014: 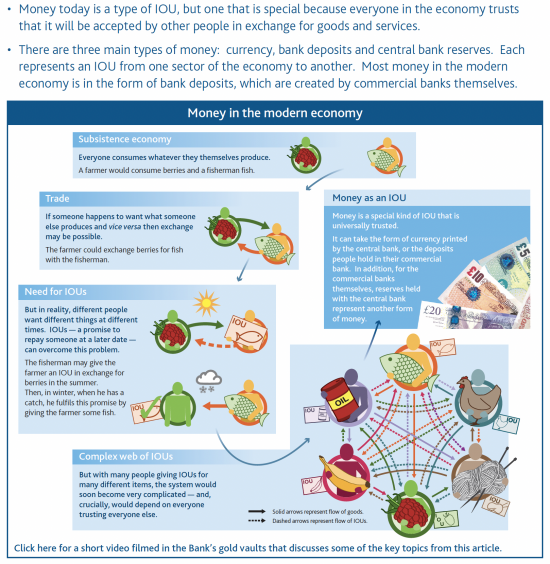 Money in the modern economy is just a special form of IOU, or in the language of economic accounts, a financial asset.

Or, in other words, money is just debt. That is all there is to it.

That includes notes and coins too: they are just a tangible record of the debt the government incurred when spending them into the economy, because they do not give them away.

Anyone who wishes to argue money is not debt is welcome to, but please take it up with the Bank of England. And if the claim is that this is not what you were taught, note that the Bank says:

The reality of how money is created today differs from the description found in some economics textbooks.

The textbooks are wrong.

Money out of thin air

The same 2014 publication from the Bank of England notes that:

In the modern economy, most money takes the form of bank deposits. But how those bank deposits are created is often misunderstood: the principal way is through commercial banks making loans. Whenever a bank makes a loan, it simultaneously creates a matching deposit in the borrower’s bank account, thereby creating new money.

That is how money is created. In a modern economy there is no other way to do it. The consequence, as the Bank of England also notes, is that:

Rather than banks receiving deposits when households save and then lending them out, bank lending creates deposits.

In other words, savings are redundant to the process of lending and banks are not intermediaries between savers and investors. The only use for bank deposits from customers as far as banks are concerned is to provide them with very cheap capital: in effect the banks treat deposits as if they are money that they might lose, a fact aided by the government guarantee for all customer deposits to £85,000, which means the banks know that they have no responsibility with regard to such sums.

Why don’t banks lend without limit then? As the Bank of England says:

Although commercial banks create money through lending, they cannot do so freely without limit. Banks are limited in how much they can lend if they are to remain profitable in a competitive banking system. Prudential regulation also acts as a constraint on banks’ activities in order to maintain the resilience of the financial system. And the households and companies who receive the money created by new lending may take actions that affect the stock of money — they could quickly ‘destroy’ money by using it to repay their existing debt, for instance.

That last point is very important. What it says is that loan repayment destroys commercial bank-created money.

As the Bank of England says in the same 2014 document:

The central bank reserve accounts are the only depositories for this base money created by the Bank of England. The suggestion that it might come from elsewhere is wrong, although it can be destroyed by the government increasing the demand for tax or borrowing - when commercial money is used to destroy the base money in the central bank reserve accounts by the settlement of debt owing with regard to tax or bond purchases.

What, however, is never true is that the commercial banks can create base money: they can only be recipients of it. In that case if the central bank reserve accounts increase it is because the government via the Bank of England (and they are not in any way independent of each other) has decided that this should happen by:

This money injection, which requires no decision or active engagement by the commercial banks, inflates those commercial banks' balance sheets - hence my suggestion that the money is gifted to them.

The Bank of England summarise this in this chart:

Thye no money assets of the Bank of England are treasury bonds, in the main.

I have summarised the balance sheets of the Bank of England as follows from 2008 to 2021 (the latest available)(click the image twice for a larger version): 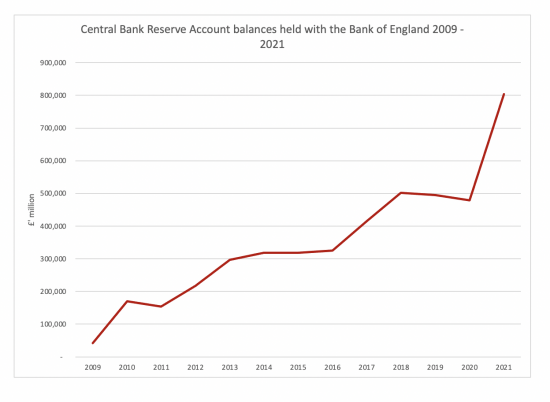 The match to QE is not perfect: other funds flow through these accounts, but it is close.

I hope this makes all these issues a little clearer, but I am not much inclined to discuss the rights or wrongs of this explanation: as far as I and the Bank of England are concerned, these are facts.